Only a fool would bet on an 800-metre race. It has become the most unpredictable race in athletics. It’s no longer an endurance event; it’s a two-lap sprint without lanes. And it’s a contact sport.

Last year at the Olympics, Peter Bol ran the race – the races – of his life to get to the final. He defiantly stared down the world’s best and said, “I am not afraid to put the pace on”. He took to the front and stayed there, challenging his rivals to catch him. 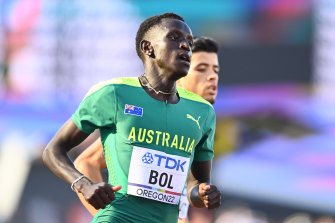 Peter Bol finished seventh in the 800m final at the world championships.Credit:Getty Images

They caught him. Just. He missed the podium by about the width of one of his diamond stud earrings.

What is unpredictable about the 800 is that Bol is in better shape than he was last year but at the world championships in Eugene last month he finished lower than at the Olympics.

“The 800 is just a strange, strange race. You don’t really know what to expect, and you only have one move to make. Everyone has got a bit stronger and hungrier this year,” he said before hitting the track in Birmingham to get a second crack at the Kenyans and some of the world’s best middle-distance runners at the Commonwealth Games.

“You go out with a plan, but the plan never goes accordingly, so you have got to be able to adjust to different sections of the race. 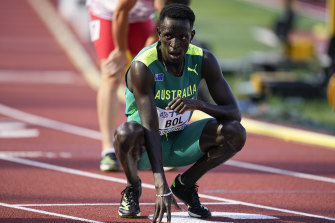 Bol takes a moment after his race in Oregon earlier this year.Credit:AP

“I usually try to get out and push, but other people do the same thing and you get pushed around a little bit, and it takes a bit out of you. I think the moment you think ‘oh shit’ and think about it is the moment you lose the race. It’s just got to be automatic, and you can’t really think about much, it’s just got to be muscle memory. You learn that experience in racing.”

Since the Olympics he has worked on different race strategies. He’s sat at the back and surged late. He’s sat in the middle. And he’s taken the pace out the front.

“It was all pretty consistent, finishing top two or three. I think the difference is with the championships in the 800, you have 48 people in the world, and it gets knocked down to eight people. Everyone else in that final has a kick, everyone has been working on the same thing.

“I am not disappointed in any way of how we performed or anything like that, I just think those guys were better.”

World and Olympic champion Emmanuel Korir is expected to focus only on the 400m, while the silver and bronze medallists in Eugene, Algeria’s Djemal Sedatji and Marco Arop from Canada, are likely to miss.

That still leaves Bol, Kenya’s Emmanuel Wanyonyi and defending champion Wycliffe Kinyamal and a handful of other sub-1:45 runners.

“That’s what makes the 800 super competitive and interesting. Put it this way: if I ever had to bet on any event, it wouldn’t be the 800. It would be the last event I would bet on.”

Bol has worked on his endurance and tactics in the last year but is shifting up to focus on speed. Next year he will look at running the 400m to build his speed.

“Korir, the guy who won it, runs 44 seconds in the 400 so that’s the fastest guy in the field. He is just tough to beat, and with a kick down.

“Endurance, I improved on that. I ran a seven-second PB in the 1500, but I think the 800 is a raw speed event these days. It’s just two 400s. It’s just go! So to be better you have to be better at the speed more than endurance.”