After being pushed to the track in her 800-metre heat, Australian record holder Catriona Bisset has won a reprieve and been added to the field for the semi-finals at the world athletics championships.

Bisset was in third place and seemingly well-placed to gain one of the three automatic qualifying places when the incident occurred on the final bend at Hayward Field.

Bisset appeared to step straight into the path of Slovenian runner Anita Horvat, who had little choice but to raise her arm, causing the Australian to crash to the track.

The 30-year-old eventually picked herself and crossed the line in last place before leaving the arena in tears, with Keely Hodgkinson winning the heat.

The race jury viewed replays of the incident and quickly added Italian Elena Bello to the field for the semis after determining she had been the runner most adversely affected by the incident.

After further deliberation, Bisset was also promoted to the semis by the jury, just as Australian officials were about to lodge an appeal. 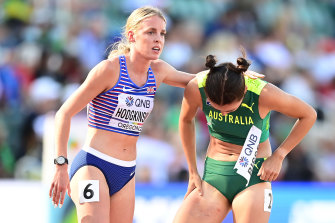 Fellow Australians Tess Kirsopp-Cole and 17-year-old Claudia Hollingsworth were both eliminated in the opening round.

Bisset was run out in the 800m heats at last year’s Tokyo Olympics.