Zana Basic’s voice breaks, but not when she speaks of her daughter Hana who on Friday will be on the blocks in the 100-metre sprint in Tokyo.

Her voice breaks when she speaks of Australia. It’s her pride in her daughter being able to do something for the country that did so much for them. The debt of a grateful migrant. 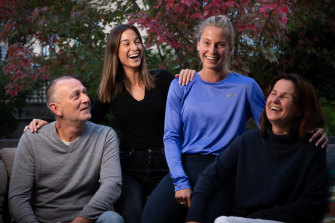 “To see our daughter represent this beautiful country is just so emotional. I still don’t know if this is a dream or this is reality. I pinch myself every morning,” Zana said from the family home in Melbourne’s eastern suburbs.

“I believe if I haven’t done anything right in my entire life, I think I have done one thing right and that is that I raised my kids to be valuable contributors to this country.

“It is a huge honour, a huge pride. We are forever grateful to Australia and I am so proud that Hana is representing this country in the most elite sports event in the world.

“I am getting emotional now; it means the world to us. This is the best country in the world and I wouldn’t want to live anywhere but here. I call myself Australian.”

Hana Basic is a modern Australian story. Her parents fled the war in Bosnia in the early 1990s. They had relatives in three countries – Italy, Australia and the USA. The choice was as simple as the first relative in Australia who came back with paperwork to get them here. But to satisfy that paperwork they had to prove they were married. They couldn’t.

“Our paperwork was not recognised during the war, 1992, ’93 so the places where [husband] Armin and I were born were not recognised,” Zana said. 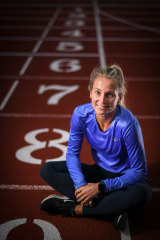 If they travelled to town to correct the paperwork, they risked Armin being pulled from a bus and being put in the army. So a cousin pretended to be Armin instead.

“We couldn't come to Australia unless we were married. We had no proof we were defacto or anything – we were in a war. So he gave power of attorney to my cousin’s husband and my cousin’s husband pretended to be Armin. It was just the funniest thing ever. You just can’t believe what we went through,” Zana said.

They arrived in Australia and after first being a national level gymnast, Basic moved into athletics. After missing years with travel, injury and enjoying social life, she started to focus on being a serious athlete. In the time of COVID-19, she and her boyfriend Kyle trained together daily. She shed weight and fractions of seconds off her time.

She made the Olympic team and on Friday will be among the first athletes on the blocks when the athletics program begins in Tokyo.

Zana has no doubt that her daughter is physically ready. She just hopes that she is emotionally in check to deal with the experience.

“She is where she belongs. Hana is very talented and we have always had belief in her; we didn’t say, ‘Oh, we want our daughter to be an Olympic athlete’, but we knew she had the capacity to do really well.

“Being without crowds might be good for her. Without the crowd it might make her life a little easier.”

The family is sad that, having been with her through the long and difficult journey, they couldn’t be in Tokyo. They will be watching from Melbourne, and gathering at Kyle’s footy club with friends and his family because COVID-19 means no visitors to the house.

“It’s been huge long journey but we got there in the end.”

Tags: Bos, From, It, means, THE, World
You may also like
Latest Posts