Stewart McSweyn wants a fast final but he won’t need to take the lead to force the pace as Kenya’s world champion Timothy Cheruiyot will take care of that, believes Australia’s middle-distance coach Nic Bideau.

The Australian 1500-metres record holder and great hope for a medal on the track in Tokyo will also be freed up from worrying about times and qualifying, as he had to do in the earlier rounds, and just be allowed to race. 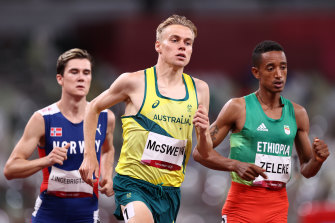 Stewart McSweyn wants the pace to be on in the men’s 1500m final on Saturday night.Credit:Getty Images

McSweyn led in both the heat and semi-final to force the pace but was overhauled to finish in the top five to qualify for the final.

Bideau said those placings were misleading when it came to his form and that McSweyn and fellow Australian Ollie Hoare were both keen for the pace to be on from the start of the final.

“Cheruiyot is in the same situation – his only chance to win is to run the legs off these other guys. And even if it didn’t go fast, Stewy has been taking the lead after 400 .

McSweyn is yet to get over world champion Cheruiyot in a race, but he has beaten the second-ranked star from Norway, Jakob Ingebrigtsen. Cheruiyot’s Kenyan teammate Abel Kipsang is the other big threat.

Hoare, who beat McSweyn in England in the Diamond League earlier this year after running in the US following the completion of his college scholarship, is also keen for the pace to be on. 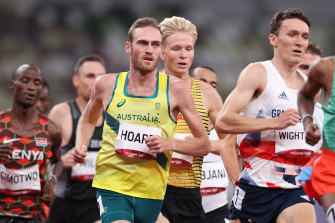 Oliver Hoare in action in the 1500.Credit:Getty Images

Hoare is now a seasoned runner who knows how to race.

“I think Ollie takes a similar approach. He is not super fast, he does run the last 300 in 40 seconds but he is not a 37-second runner like [Great Britain’s] Josh Kerr so he will need it to be fast and we will only find out [on Saturday night] what he can do off a really fast pace.”

“I definitely feel like both of them [McSweyn and Hoare] have got a chance of getting medals,” Bideau said.

“To me, Kipsang and Ingebrigtsen look the best, Cheruiyot doesn’t look right to me – there must be a reason why he didn’t get top three in the Kenyan trials, there is something bothering him.

“These guys have got plenty of talent. [And Australian middle-distance runners] Jye Edwards is good, Matthew Ramsden is good, Luke Mathews is good, Ryan Gregson is still good so they won’t be able to coast around and make the team every time any more.

“It’s only a matter of time before we start getting medals in that event but we are getting there.”

Tags: Fast, in, Lane, Life, McSweyn, THE
You may also like
Latest Posts