Eugene, Oregon: Australian Nina Kennedy has shown nerves of steel, overcoming a horror start to the women’s pole vault final at the world athletics championships to claim the bronze medal.

Kennedy missed her first attempt at her opening height of 4.45 metres and ran under the bar with her second, meaning she needed a clutch final-round clearance just to stay in the competition. 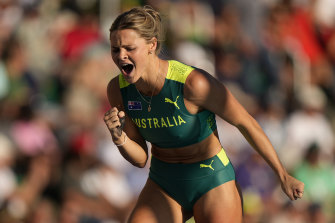 Kennedy missed twice at 4.85 and once at 4.90 – both beyond her personal best of 4.82 – to leave Americans Katie Nageotte and Sandi Morris to battle it out for gold.

The bronze was Australia’s first medal of the 10-day championships.

Morris has finished second at three successive world championships and the 2016 Rio Olympics.

Australian Stewart McSweyn booked his spot in the men’s 1500m final on Tuesday with an impressive front-running effort in the second semi.

McSweyn made the early going and held his spot in the top five throughout, eventually finishing fifth in three minutes 35.07 seconds. Countryman Ollie Hoare bowed out in the other semi.

Big Matthew Denny could hardly have been more impressive in the men’s discus qualifying round. Denny opened up with a solid throw of 64.89m and then bettered the automatic qualifying standard in the second round with 66.98m – just nine centimetres shy of his PB – to confirm he will be a real medal chance in the final.

After just missing out at the same stage at the Tokyo Olympics, Alex Beck was thrilled to advance to the semi-finals of the men’s 400m. 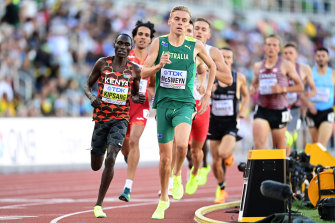 Stewart McSweyn in the semi-final of the 1500m in Eugene.Credit:Getty Images