Catriona Bisset used to be intimidated by the big-race meetings but now they excite her, which is a good thing because she is going to the Olympics.

Bisset’s preparation for the Tokyo Games includes the Diamond League meets in Europe. It will be her first full European season and her first Olympics. 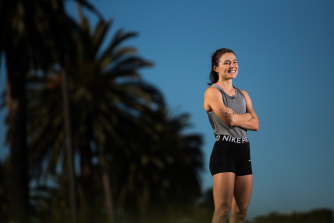 If they are not a typical Games due to the COVID-19 pandemic that doesn’t matter, she doesn’t know any different.

“It’s one of the benefits of it being my first Olympics, this is all normal to me. I don’t know what it was like in Rio, I don’t have any expectations, all of this is just what you have to do to be an elite runner,” said Bisset.

“It can be exciting and new for me and I can run fast and I don’t have any sadness or regret that I am nostalgic for how things were, this is all just new to me.

“I am really excited, especially racing in Europe. We go over there and just race the best people in the world. It’s what gets me excited.”

Bisset had a breakout year in 2019 when she went briefly to Europe and racing the best in the world at the London Grand Prix. The middle-distance runner set a new women’s national 800-metre record of one minute 58.78 seconds.

Life changed after London and Europe. Suddenly she wasn’t an anonymous runner from Newcastle any more. People knew her name, even if they did start to abbreviate it to “Cat”. She prefers “Trina″⁣, just so you know.

As intimidating as the world’s best can be, she knows now that they also bring out her best.

“I like higher-pressure environments, I perform better. I feel like I am an emotional athlete. I very much respond to the people around me and to the environment and get the best out of myself in those situations,” she said.

“I love the big show.

“I used to find it a bit intimidated in 2019 when everything was happening so quickly to me and everything was so new and different and scary, but I feel having had 2020 where I had that taste and it was all taken away from me I just feel so excited about getting it back again.

“I feel like I have grown up a lot as an athlete, so I am ready for that pressure and I want people to watch and see what I can do instead of worrying about failing and all that stuff.

“I feel like I am in a much better head space because I am not taking things for granted.”

She has spoken before of dark periods where mental health problems enveloped her but she is managing that better now.

“I think it is always an ongoing thing and I think it’s something we all go through different times in life,” she said.

“In talking about getting so energised by these big environments I feel like part of that is I am very responsive to my environments, which has been hard in the past with my anxiety, but I feel it is kind of a benefit now.”

She also goes in knowing she is in good shape and running well – she ran her second-quickest time ever in March when she ran 1:59.11, which was also her second Olympic qualifier – and is consistently hitting two minutes flat.

Tags: 'No, Bisset, Cat, P, ready, to, Trina
You may also like
Latest Posts