With just two and a half hours left before the qualifying deadline, steeplechaser Ed Trippas stopped the clock at just the time he needed.

On the very last possible day, Trippas qualified for the Olympics when he ran eight minutes 19.6 seconds for the 3000-metre steeplechase at a meet in Spain.

It was the third quickest ever time by an Australian after Shaun Creighton and Yousef Abdi.

“Crossing the line there weren’t many results around for five minutes so I didn’t know for certain if I had run the time, but once it got announced I grabbed my phone and ran back to the hotel so I could get WiFi and I called my parents crying because it was such a special moment,” Trippas said.

“Going through with a lap to go I only needed a 67-second lap, which was very doable, so my main focus was to stay on my feet and I knew I could get the time.”

Studying at Princeton University in the US, Trippas had initially hoped to be able to qualify on world rankings. But as places filled he realised he would be squeezed and would need to run the qualifying time. 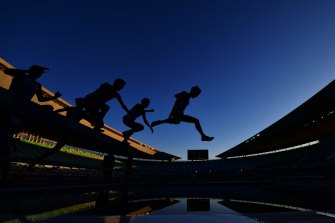 “It is a cool story though that I qualified with 2.5 hours remaining before the deadline,” he said.

“My initial reaction was just pure happiness because although I believed I could run the qualifying standard, it can be hard to chase a time under pressure. I just wanted to have fun because that is when I run my best.

“After nationals I genuinely believed that I could qualify through rankings, however, as the season went on it was clear I was going to have to run the qualifying time so I started looking for races to run fast.

“It’s cliche but starting the sport from Little Athletics and growing up doing athletics in Australia, it is always the dream to make the Olympics. To have actually done it hasn’t sunk in yet and still sounds crazy to me.”

Tags: for, Ol, qualifies, Steeplechaser
You may also like
Latest Posts