Ollie Hoare is big in the US but you won’t have heard of him, which is not unusual for American runners except that the 24-year-old is not an American runner – he is Australian.

Hoare is like an indie band that is bigger overseas than at home. Australia is his home, but America has been his track.

In 2018 he was the best 1500m runner in the US College system, winning the NCAA championship. Nine times he has been the college system’s Big Ten champion across cross-country, indoor racing and track. Big Ten might sound like a chain of all-you-can-eat restaurants but it’s actually an elite bracket of the college system. 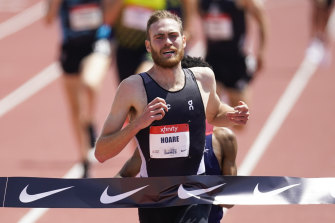 Ollie Hoare has built a name for himself in the US but wants to wear green and gold at the Tokyo Olympics. Credit:AP

On February 13, Hoare set a new Australian national indoor record when he ran 3:32.35. Indoor running doesn’t get the cut through here that it does in Europe and the US but it was a very good run – the seventh fastest by anyone in the world indoors – and he beat Scotsman Jake Wightman, who had finished fifth at the 2019 world (outdoor) championships in Doha.

He is the quickest Australian 1500m runner and has run a quicker time (3.33.19) this calendar year than national record holder Stewy McSweynn (3.34.5). McSweyn’s national record was set in Doha last year when he ran 3.30.5.

Hoare is fast but so are a clutch of other Australian men’s 1500m runners. Australia is enjoying a golden period of middle-distance running with an embarrassment of riches.

Australia has filled two of its three available places on the team for the 1500m, with McSweyn already picked and Jye Edwards an automatic selection, after he beat McSweyn to win the national title last month when he ran 3.33.99, which was the second fastest time this year behind Hoare.

Hoare didn’t come to Australia for the nationals last month where he would have raced these friendly rivals and victory for any runner with a qualifying time was an automatic ticket to Tokyo. He was running in the US and with two weeks quarantine required to come here for the titles he got dispensation to not attend. Still, it was a risk for him.

“AA [Athletics Australia] understood that my best way to make the team was to compete against people who are going to be at the Olympic Games, to win those races and to run those times,” Hoare said this week from the US.

“In Eugene again I raced an 800m world champion and beat him as well, Donovan Brazier [from the US]. I also ran against two or three other guys in [California], who are world championship finalists in Doha, so to be able to compete head-to-head with them, come out on top and run fast has been a good indication of where I am, not just for myself and fitness but in that kind of position in the 1500m globally.” 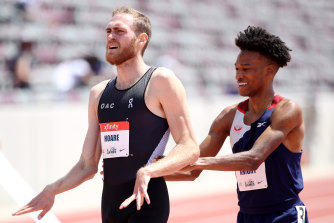 On Sunday in England (Monday morning AEST) he is racing in Gateshead England at the Diamond League meet against a field of fellow Aussies, to decide who gets selected for the last spot on the team.

“I am really pleased Ollie is running in Gateshead. He didn’t run and hide and say, ‘Pick me’ on my time. He said he will go to Gateshead and come out to race and if he beats those guys he will almost certainly take the last spot,” said Australia;s middle-distance coach Nic Bideau.

“He has the fastest time this year but in the selection period McSweyn is quicker.

“I told him the only way to guarantee selection is to race those guys – Ramsden, Gregson, Rory Hunter. I said, ‘It will help you get selected if you beat those guys,’ and he has done the right thing by the sport, by himself and by the selectors, by racing.”

Hoare has never raced McSweyn and hasn’t beaten Gregson or Ramsden, but he also hasn’t raced them in a long time as he was a student in the US and not regularly running here.

Hoare was a quick college runner but he has got better since he finished college – he graduated University of Wisconsin with a degree in economics last year – and turned pro. In his first year as a pro runner his times have dropped rapidly.

“It’s been kind of a break-out year already,” Hoare said.

“I know Stewy a little but I haven’t had the pleasure of running against him, the last time I was around Stewy was when he was running in the 5k, 10k and steeple before he broke out in the 1500m as well.

“Matthew Ramsden I have raced quite a bit, we are the same age group, and

Edwards and Gregson I have raced too. I have been around them and raced them, at that point I was still at school, still in college, and I was committed but I wasn’t living the lifestyle that I know some of those guys were.

“It’s great for me to be able to step up and put myself in the best possible position to compete against those guys because they are some of the best guys we have had at the distance.

“[The US runners] have been joking about me joining the US team, they put out that idea if I didn’t get selected, that I should just become an American, but I am an Aussie at heart. I have waited my whole life to wear the green and gold, so that won’t change.”

Tags: for, gunning, hopeful, last, Tokyo
You may also like
Latest Posts