The US men’s track team is making history at these Games. They have not won a gold medal at the Olympics for the first time in modern Olympic history.

They are having a disastrous Games. Or as the Wall Street Journal headlined it: “The U.S. Men’s Track Team Is Having a Nightmare Olympics”. 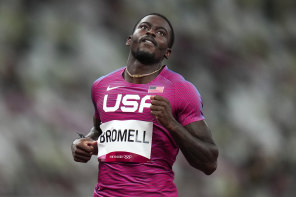 Trayvon Bromell did not even make the 100m final.Credit:AP

The US track and field team has won gold medals – four by the women and one for their male shot putter – but in men’s competition on the track, which the US have routinely dominated, not a cracker.

Their only hope of changing this unwanted history will be the 4x400m relay team. Otherwise, on Friday, they have two men ranked in the 40s in the 5000m final, and a runner ranked 33 in the world in the 1500m final. That’s it. A lot rides on that baton doing four laps of Tokyo Stadium quicker than any other.

Their stars have gone missing.

Treyvon Bromell was the quickest man in the world leading up to Tokyo. He didn’t make the 100m final.

Two hot favourites for the 400m didn’t get on the podium.

Rai Benjamin beat the previous world record when he ran the 400m hurdles final. But so too did the man in front of him, Norway’s Karsten Warholm.

The US ran beautifully in the 200m and finished in three of the first four places, just not in first place. Noah Lyles won bronze and called it boring.

“Everybody wants to win when they come to the Olympics. The bronze is not what I wanted, but at the same time it’s a great achievement of course,” Lyles said. “It’s nice to have but I want more.”

On Thursday, Grant Holloway, the world champion dubbed Wonder Boy, was the strong favourite for the 110m hurdles. He won silver.

Then there was the 4 ×100 relay team which seemed to become emblematic of the ills of the entire men’s track team. They had a shocker. They did not even make the final.

They had the sort of performance that drew a stinging rebuke from their greatest male track and field athlete Carl Lewis, who called it a total embarrassment.

“The USA team did everything wrong in the men’s relay. The passing system is wrong, athletes running the wrong legs, and it was clear that there was no leadership. It was a total embarrassment, and completely unacceptable for a USA team to look worse than the AAU kids I saw,” Lewis tweeted.

The athletes were at a loss to explain this unwanted history. They were not losers, they had not failed, they were great athletes but they were a team that was going down in history for not doing something every other US men’s track team had done.

“I think everybody is just bringing their A-game,” Clayton Murphy said. He finished ninth in the men’s 800m final.

“It’s not easy, it’s never been easy. We just kind of been on top.”

Tags: having, is, Men's, team, track, US
You may also like
Latest Posts