In a sign of the times with the new-look Boomers, Dante Exum, the Melbourne-born product who has just completed his seventh NBA season, thought he had never met Olympics bolter Duop Reath before they arrived at a pre-Tokyo training camp in Los Angeles.

“I didn’t think I knew him but he told me he was at the [under] 19s camp, which I didn’t remember. I don’t know if I just have a bad memory,” Exum said of the 211-centimetre centre. 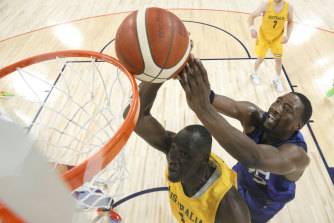 “He is one of the nicest dudes I have met. I couldn’t say anything bad about the kid and when I say kid, he is a year younger than me.”

There are seven first-time Olympians in the Boomers’ 12-man squad, and the South Sudan-born Reath is a “great, great person”. Exum hopes that “Australian basketball fans get to learn a bit about and what he is like as a person”.

Reath, 25, does have an inspiring story to tell. Together with his parents Thomas Duop and Nyanen Juch, they left a war-torn life in the South Sudanese village of Waat when Reath was six and settled briefly in Kenya’s Kakuma refugee camp. Their next stop was Brisbane for a year, and then on to Perth, where Reath, his parents and six younger siblings still live.

His mother works in daycare and father at Perth’s casino, with Reath saying they did all they could to give their children a safer life.

“I was young so I don’t remember too much but I remember everything was family orientated when I was younger. We were raised around family,” Reath said.

“Obviously, there were some ups and down when we were young but you don’t really realise it until you get older. Overall, I felt like I had a pretty good life when I was young.”

He said he can remember “a little bit” of witnessing the fallout of the civil war “but most of the time we were kept safe” .

“Our family just tried to protect us from all that stuff. When we get older, they didn’t want us knowing too much about it but when we ask questions, they tell us.

“They just wanted to protect us from that and give us the best childhood possible that they could. They just tried to keep us away from that stuff.”

Reath grew up dreaming about playing for the Socceroos and also turned his hand to Australian rules football. However, the gangly teen found himself too often “buried” in tackles, and a growth spurt in year 10 prompted him to start playing basketball at Girrawheen Senior High School. In a strong Sudanese community, he also played basketball against Aliir Aliir, the former Sydney Swan and now Port Adelaide defender.

Having joined the local basketball competition, Reath’s potential was obvious. A talent scout from Lee College in Texas was so taken by him during a Sudanese basketball tournament that he was offered a scholarship. Reath accepted and a professional basketball career was in the making.

He spent his freshman and sophomore seasons with Lee College and linked with LSU, where Ben Simmons had spent a year. His star rose, to the point he scored a career-high 31 points against Vanderbilt and was named southeastern conference player of the week.

Overlooked in the 2018 NBA draft, he has spent recent seasons in the Serbian league with powerhouse KK Crvena zvezda, where he has learnt to speak the local language, but he also experienced summer league NBA time with the Dallas Mavericks and Brooklyn Nets.

His name had barely been mentioned as a Tokyo candidate until the shot-blocking centre who can knock down the three-pointer impressed in the EuroLeague this season.

When the call came from coach Brian Goorjian to join the Boomers, Reath could barely believe it. That was much the same response from his family, but all knew it was the culmination of years of sacrifice.

“I am the oldest of my family too, leaving my little brothers and sisters behind was pretty hard, just knowing it is going to be challenging being away from everybody and not having that family stability to come home to. Especially growing up as a South Sudanese family, family is the backbone to everything you do.

“So leaving that, I just had to adjust to basically being an individual at a young age which had its ups and downs but, at the same time, it was another obstacle in my journey.”

As a back-up big man, Reath played important minutes through Australia’s series of exhibition matches in Las Vegas, including nine points in an upset win over the USA on Tuesday.

Teammates have taken their time to get to know the gentle giant, and appreciate what he has gone through.

“He brings great energy and enthusiasm, plays really hard. He has been fun to get to know off the court,” veteran Boomer Matthew Dellavedova said.

Local basketball fans will get to know him more when he lines up with the Illawarra Hawks in the National Basketball League next season, although Exum, a part-owner of the South East Melbourne Phoenix, wished Reath had linked with his club. 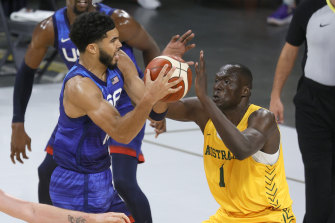 An NBA call-up may also come, but of immediate importance is helping the Boomers to a breakthrough Olympic medal.

“We are just working to bring that medal home,” Reath said.

Tags: From, Rea, South, Sudan, to, Tokyo
You may also like
Latest Posts