Knowing little English, the family initially struggled with the move to Perth. But when Swaka Lo Buluk discovered basketball, everything became much simpler.

Leading into Sydney’s clash with his former team, Perth Wildcats, Swaka Lo Buluk has opened up on his childhood and how he and his brother find their passion in life.

“There was a lot going on [in Sudan] and my parents decided when I was young that Australia was going to be a great place to live in,” he said. “Everything has been good ever since.”

At 20, Swaka Lo Buluk has made a major impact on the Kings this season after three years with Perth, where he helped the club to NBL championships in 2019 and 2020.

He became the youngest player to make his debut for the Wildcats when he took the court as a development player at 17.

In 2021, he came to Sydney as an injury replacement player for Dejan Vasiljevic and has since made waves on the east coast to become an integral part of the squad. 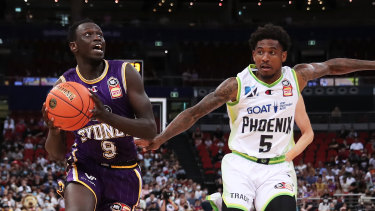 Swaka Lo Buluk knows basketball has brought him much more than just an NBL contract. As a child, it was his way of making friends, and many of those relationships continue to this day.

“Obviously, English wasn’t our first language and that was tough,” he said. “I’ve always been a quiet kid growing up. I was always shy and basketball helped me. It definitely did help me socialise with a lot of new people and that’s why I love basketball. It’s the people you meet.”

Swaka Lo Buluk fell in love with basketball after seeing his older brother play when the family first moved to Perth. He also tried his hand at Aussie Rules, but enjoyed the court over the oval.

“It’s worked out well,” he said. “So, I’m happy with the way things are going at the moment, but I think I’ve still got a long way to go.”

Like all basketballers, Swaka Lo Buluk dreams of making it to the NBA, but he knows that is a long way off. For now, he is hoping to simply make his name known in Sydney.

“I’ve always had those goals but, right now, I’m just going along with it and, hopefully, it will happen in years to come,” he said.

“We’ve got a bunch of great guys [at the Kings]. It’s just a great brotherhood to be around these guys. They are always there for each other.”

As for the move from Perth to Sydney this season, Swaka Lo Buluk says he simply can’t wait to get back home to tuck into a Sudanese feast made by his mum.

“I really miss my mum’s cooking but also miss the whole family,” he said.

The Sydney Kings will play the Perth Wildcats at 3pm on Sunday at Qudos Bank Arena.