Josh Giddey has taken two big bumps in his NBA rookie season. One left him breathless, the other had him questioning his love for the game.

But the Oklahoma City Thunder playmaker bounced back from both and plans to power through the rest of his first campaign. 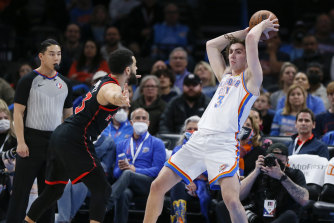 Josh Giddey in action this week for Oklahoma City.Credit:AP

The 19-year-old Victorian is a candidate for the NBA rookie of the year award, having won three rookie of the month honours in the western conference and broke the NBA record for youngest player to post a triple-double – all while equalling other records, several held by such legends as LeBron James.

Giddey has also made the Rising Stars game and the skills challenge at All-Star weekend in Cleveland later this month.

That first bump came early in the pre-season when the Thunder ran into NBA champions Milwaukee Bucks and Giddey found himself trying to guard MVP Giannis Antetokounmpo. 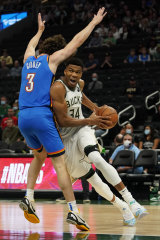 “He hit me in the chest going into the ring and I lost my breath, so that was probably my welcome-to-the-NBA moment,” Giddey told The Age and Sydney Morning Herald this week.

“But any time you step on the floor with someone you’ve looked up to, it’s pretty surreal. That was the first time that I played against one of my idols that I grew up watching.”

The second bump came as Giddey was exhausted from non-stop games and travel that all NBA players face over the 82-game season.

His performance didn’t show it but Giddey admits he had trouble motivating himself, so he reached out to others, including retired NBA title winner Andrew Bogut.

“We’ve got access to world-class recovery, physios, treatment, all that stuff. My body’s been good.

“When you get to that 40-game mark, it’s more than double [the games] I played in the NBL.

“There was a point where I just couldn’t find any motivation to get up and play. It’s more games than I’ve ever played in my life – that was one rookie wall that I hit – so I did text a few guys and I texted Bogues [Andrew Bogut] and asked what he did to get over that.

“He said find hobbies outside of basketball, find things to do. He recommended playing poker, which is not something I’ve done because I’ve no idea how to play.

“A lot of the time when you’re not playing or training, you’re at the house just resting. So having things to keep your mind off basketball is pretty important.”

Those comparisons to James or LaMelo Ball or Magic Johnson will continue as long as Giddey is playing well, but he has kept them in perspective.

“The individual stats are cool, but you’re just another player in the NBA,” Giddey said.

“There’s no reason for me to go out there thinking I’m one of these special players because I’ve had a couple of successes as there are guys who have been doing it for decades.”

Giddey’s arrival at the Thunder couldn’t have worked out better as he quickly moved into a starting role, averaging 12.1 points, 7.6 rebounds and 6.2 assists in 49 games.

His passing and poise under pressure has captured attention as he sets up fellow Thunder stars Shai Gilgeous-Alexander and Luguentz Dort and role players such as Kenrich Williams, who Giddey found on a stunning back-cut to force overtime in a recent win.

Giddey has also kept his turnovers to 3.1 a game despite averaging 31 minutes a game and handling the ball every play.

Off court he has faced homesickness, but he has his sister Hannah playing college basketball a 90-minute drive away at Oral Roberts University.

“She is over at my house right now,” Giddey said, with a laugh.

“I’m used to living at home, having mum wash my clothes, so it was hard, but having my sister nearby has been the best part. But my mum has been over here and is coming back for All-Star break. The family will be back and forth.”

The Thunder are rebuilding, as their 17-37 record shows, but the play of Giddey and co have kept them fun to watch and competitive.

Giddey has also blocked out criticism of his outside shooting.

“I went through this in the NBL where I couldn’t make a shot. I was down, hesitant to keep shooting,” Giddey said.

“But once I started speaking to people, I spoke to Drewy [Andrew Gaze] and he said people are going to criticise, critique everything you do, and that really hit me. After that, I didn’t buy into percentages and all that stuff.

“I shoot every shot like it’s going in. I’ll keep getting in the gym and getting shots up.

“The more I work at it, the better it’s going to get.”

With his name being mentioned among superstars, he admits he sometimes gets fixated on his performance.

“All the time,” Giddey said.

“That’s one of the things I got to work on is not doing that. After bad games, I’m going back home and dissecting every little thing I did wrong and if it was a good game, then I’m doing the same thing.

“I’ve definitely got to work on it, and it will happen over time.”