In a sense, that's all you need to know about the camaraderie Weaver has built at the Kings, who begin their push for the Harbour City's first NBL title since 2008 against Melbourne United at Qudos Bank Arena on Saturday night. 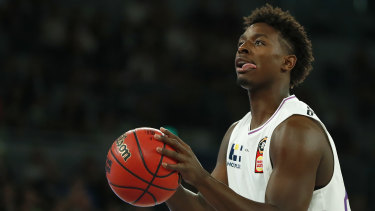 Tate, who was crowned the team’s MVP at the Kings’ awards night last Wednesday, arrived in Sydney fresh off winning a championship in Belgium.

His reasoning for joining the Kings over other Australian suitors?

"I think it’s all good to win individual awards but I joined this team because of the star power it has and the ability to win a championship," Tate told the Herald after an intense training session at the team's Lidcombe base.

"Coming in and winning it in my first year with a first year coach, that’s an opportunity to be in the history books. That was my mindset at the beginning of the year and it still is.

"When you play well and you win, the individual awards come later. I’ve just piggybacked off Will putting me in great spots and my teammates."

Tate may have joined to play alongside Andrew Bogut, Casper Ware and NBA-bound Didi Louzada but he now wants to win a championship for Weaver.

Since arriving in Sydney, Tate feels like the Boomers assistant has moulded the team around his style of play.

"When you play for a coach that you know will run through a wall for you and just wants the best for you – yeah it’s about winning games – but he just wants to see your development. That’s Will Weaver, man," Tate said.

"That dude is always working. The time he puts into his job – you don’t see that a lot.

"This is only my second year pro but I’ve been blessed every year with a coach that I feel like fits me perfectly. It’s the same for this year.

"I want it for me and I want it for the team but I really want it for him, man. It’s his first year – getting him a championship – that’s big. I would run through a wall for that guy and we’re gonna do this together."

Weaver doesn't agree he has moulded the team around Tate.

He points to his success in Belgium and before that at Ohio State as proof he is the difference maker.

"History points to the fact that he has fit everywhere he’s gone," Weaver said.

"That has more to do with him than the places he has ended up. He’s just built so right.

"He’s a competitor, he has a sense of humour, his family deserves a lot of credit for who he is as a person."