Be careful what you wish for. That adage comes to mind when I think of Kyrie Irving and his misguided, misinformed and downright dangerous support of antisemitism.

Brooklyn Nets general manager Sean Marks, in announcing the firing of coach Steve Nash at a news conference Tuesday, tried to say Irving’s sorry-not-sorry stance over the antisemitic and conspiratorial posts he made on social media had nothing to do with the team’s decision to part ways with Nash.

He said no players were consulted, and he urged reporters not to link the coaching change and Irving’s posts.

But it’s hard to separate Irving from the disaster the Nets have become, even though they were hyped before the season as a possible title contender behind the force of Irving and Kevin Durant.

Irving’s offensive posts, while no longer online, are clearly overshadowing the Nets, and the league. Some courtside fans wore T-shirts reading “Fight Antisemitism” at a home game Monday against the Indiana Pacers, and Marks said that the team has been asking for advice from the Anti Defamation League. He would not say if Irving has been part of those conversations.

He really should be, and the NBA — sputtering from crisis to crisis this season — should be ashamed one of its franchises has to resort to such a dialogue. 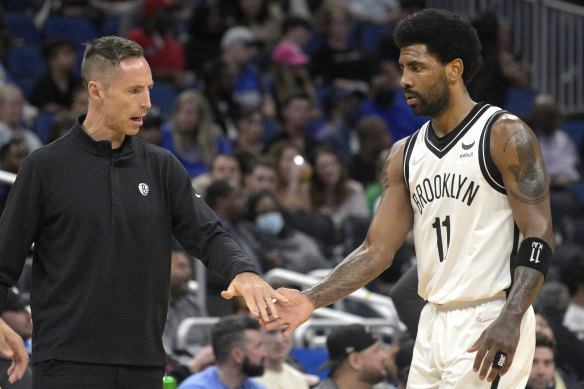 Kyrie Irving has been at the centre of the Nets’ woes, which culminated in the sacking of coach Steve Nash this week.Credit:AP

This episode shows that the athlete empowerment I’ve championed has a flip side: Irving needs to consider the power of his words and his role in spreading dangerous messages to millions.

Irving, the Melbourne-born Nets point guard, is a basketball star with a megaphone. Nike sponsors him and produces his signature shoe. He is a vice president of the NBA players’ union. He is not only a regular in the nationally televised sports firmament, he has 22 million followers on Twitter and Instagram.

He can use his platform for good, which he has done as one of the many famed black athletes who stood against injustice during the tumult of 2020 following the killings of Ahmaud Arbery and George Floyd.

But he can also do as he is now — use his status to inject poison into our world.

It’s time for the NBA to consider the ramifications of having Kyrie Irving in the league.

Irving recently shared to his sizeable social media following a link to a film that is a case study in antisemitic tropes and the disgusting narratives that have dogged and harmed Jews for generations. I will not give the movie any more credence or legitimacy by naming it. But let’s put it this way: Any narrative that claims Jews controlled the slave trade and worship the devil deserves the firmest of condemnations.

And in case you missed it, this is not the first time Irving has gone down the rabbit hole. Just a few weeks ago, he was sharing an old video of Alex Jones railing against the so-called new world order.

Alex Jones. The alt-right talk show fraud recently ordered by a jury to pay nearly $1 billion to the families he defamed after their children died in the mass shooting at Sandy Hook Elementary in Connecticut.

Has Irving expressed any remorse or doubt for any of his posts? No, none. Instead, he doubled down, sticking to what has now become the script for public cowards, casting himself as a victim of reporters and anyone else who dares to ask about his support of hatred. 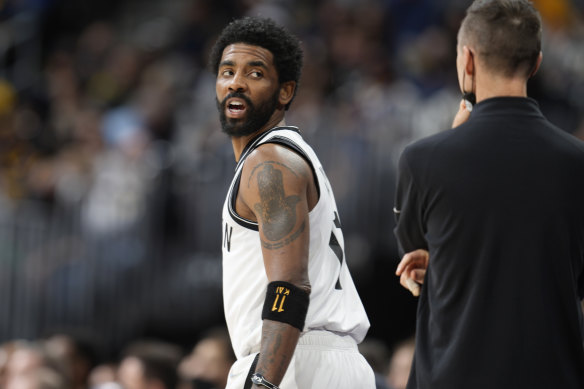 “Why are you dehumanising me?” he said after Saturday’s game, claiming he did nothing wrong and denying any responsibility.

Irving has shown himself as a poor and unacceptable leader for the Nets. Yet if Nash goes because he’s proved to be a mediocre coach, why should the team tolerate someone like Irving?

It was easy to shrug off Irving as eccentric when he claimed with a straight face that the Earth is flat. He’s clearly a man easily duped into following conspiratorial thinking and who fails to vet or think critically about the information he consumes.

Then came more warning signs he would not shirk from peddling dangerous ideas. He held tight to his anti-vaccination beliefs during the coronavirus pandemic and refused to follow science during a public health crisis that has killed more than 1 million Americans and decimated black and brown communities that Irving claims to care for deeply. 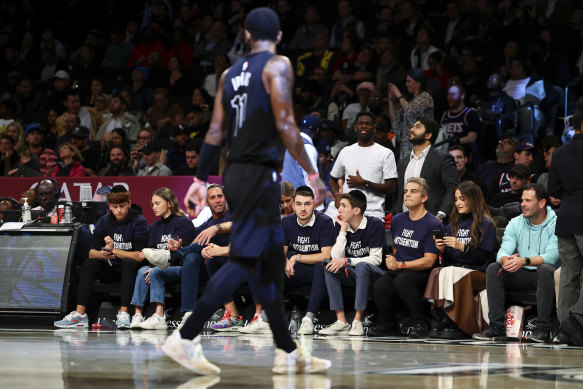 Kyrie Irving walks by fans in ‘Fight Antisemitism’ shirts during the Nets’ match against the Indiana Pacers.Credit:AP

It’s time for the NBA to consider the ramifications of having him in the league.

“Let’s acknowledge that Kyrie is a basketball player, not a scholar, a subject matter expert on these issues,” Jonathan Greenblatt, the chief executive and national director of the Anti-Defamation League, said when we spoke Tuesday. “On the other hand, he’s a role model, one of the most beloved players in the league, let alone in Brooklyn. And I say that because when he tweets, it says something, and it sends signals, and people listen to him.”

All of this feeds into a grim reality for American Jews. Fuelled by antisemitism from several quarters, acts of violence against Jews and Jewish institutions reached the highest level seen in the nearly 45 years the ADL has been tracking such hate crimes, according to Greenblatt.

The sad paradox is that Irving plays for a team based in Brooklyn, where “we have seen a surge of antisemitism in recent years,” Greenblatt said. “Jewish people are getting harassed, Jewish homes and synagogues are getting vandalised. People are getting assaulted. What Kyrie did, considering the team he plays on, that’s why I think it struck such a nerve for so many people.”

With fame comes responsibility. Part of that is the responsibility to gain critical understanding before using the power of your voice. Irving and others did that in 2020, ushering in a new age of empowerment, and athletes felt encouraged to speak up against authority. But he failed miserably with his recent posts.

Should we hold out hope that he can redeem himself?

Remarkably, Greenblatt believes he can. If, that is, Irving “will take the time to engage kind of in a process of learning and healing, working to better understand.”

“I think all of us would be well served by this.”

Greenblatt is ready for the call. Is Irving?

This article originally appeared in The New York Times.