Zion Williamson's highest-scoring NBA game was not enough as a triple-double from LeBron James lifted the Los Angeles Lakers to a 122-114 win over New Orleans.

Rookie Williamson finished with a game-high 35 points but his largely productive and highlight-filled night was marred somewhat by six turnovers. 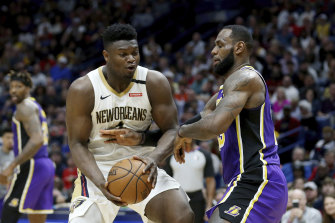 Zion Williamson and LeBron James compete in the Pelicans’ clash with the Lakers.Credit:AP

The western conference-leading Lakers overcame the absence of Anthony Davis with James scoring 34 points and adding 13 assists and 12 rebounds in another dominant all-round performance.

The opening half was a competitive, crowd-pleasing affair, highlighted when, moments after Williamson had cut to the hoop for a one-handed stuff, James pulled up from 35 feet for a three that tied the scores at 61-all.

Davis, who spent the first seven of his eight seasons with New Orleans, sat out with a sore right knee, one night after playing in the Lakers' loss at Memphis – who lead the Pelicans by three games in the race for the final playoff spot in the western conference.

Earlier, Giannis Antetokounmpo posted the first 40-20 game of his NBA career in Milwaukee's 93-85 win over Charlotte.

The league MVP had 41 points, 20 rebounds and six assists to become the first Bucks player with a 40-20-5 game since Kareem Abdul-Jabbar in March 1974.

The Bucks have won six in a row, 20 of their past 22 games and improved their season best record 52-8.

The Los Angeles Clippers survived a tough challenge from the short-handed Philadelphia to prevail 136-130.

Kawhi Leonard had 30 points while Paul George, Lou Williams and Montrezl Harrell all added 24 for the Clippers, who are second in the western conference.

Philadelphia's Shake Milton led all scorers with a career-high 39 points as the Sixers had to make do again without injured All-Stars Ben Simmons (back) and Joel Embiid (shoulder).

Second-year guard Milton made seven-of-nine shots from beyond the arc with his first five straight to set an NBA record of 14 made threes in a row in a single season.

Nikola Jokic had 23 points, 18 rebounds and 11 assists for his 12th triple- double of the season to lead Denver past Toronto 133-118 while Kristaps Porzingis tied a season high with 38 points in Dallas's 111-91 victory over Minnesota.

Sacramento came back from 17 points down to defeat Detroit 106-110 while Washington beat Golden State 123-110.

Tags: as, dump, James, Lakers, stars, Zio
You may also like
Latest Posts