With the race for seeding hotting up in both the Western and Eastern conferences, the NBA is continuing to throw up shocks and upsets.

But some things never change and the Los Angeles Lakers continued to gather steam heading into the play-offs as they won to stay top of the West.

Below is a round-up of Friday’s action featuring 18 of the 30 teams in the NBA, with the Lakers and the Toronto Raptors the pick of the bunch.

LeBron James and Anthony Davis combined for 60 points as the Lakers returned from the All-Star break with a 117-105 victory over the Memphis Grizzlies on Friday night.

Davis recovered from an early injury scare to get 28 points and 13 rebounds while LeBron finished with 32 points. 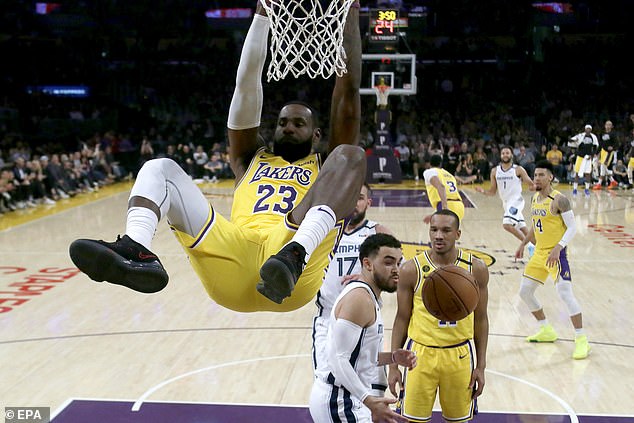 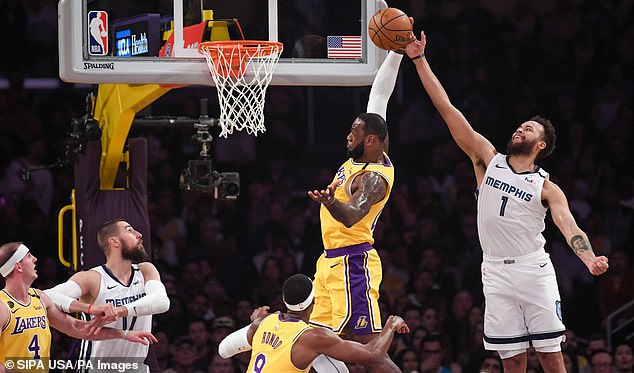 Avery Bradley added 14 points for the Western Conference-leading Lakers, who finished strong after blowing most of their 25-point lead accumulated in a superb first half. Davis had 14 points and seven rebounds in the fourth quarter alone as the win sees the Lakers improve to 42-12 with its fourth straight win since February 6.

Josh Jackson scored a season-high 20 points for the Grizzlies, who have now lost back-to-back games in California after heading into the All-Star break with eight wins in 10.

No 2 draft pick Ja Morant added 17 points as Memphis dropped to 0-2 on its four-game West Coast trip, which matches its longest road stretch of the season.

Pascal Siakam stole the show as he finished with 37 points and 12 rebounds as the Toronto Raptors beat the Phoenix Suns 118-101 on Friday night for their 16th win in 17 games.

Serge Ibaka added 16 points, Fred VanVleet and Terence Davis each finished with 14, Kyle Lowry had 13 points and 10 assists and OG Anunoby got 12 points for the defending NBA champions.

After Toronto’s franchise-record 15-game winning streak ended with a loss at Brooklyn in the final game before the All-Star break, the Raptors bounced back by starting the second half with their eighth consecutive home victory.

The Raptors have not lost back-to-back games since an overtime loss at Indiana on December 23 and a home loss to Boston on Christmas Day. Toronto has gone 19-1 since. 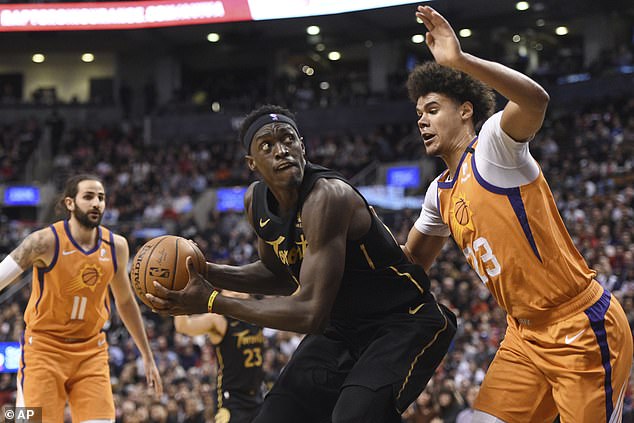 Gordon Hayward scored 29 points and Daniel Theis boasted career highs of 25 points and 16 rebounds as the Boston Celtics made a strong return from the All-Star break, holding off the Minnesota Timberwolves 127-117.

Marcus Smart had 10 points and a season-high 10 assists as the primary point guard in Walker’s place, helping the Celtics win for the ninth time in last 10 games.

They’re now one and a half games behind defending NBA champion Toronto Raptors for second place in the suddenly stacked Eastern Conference. 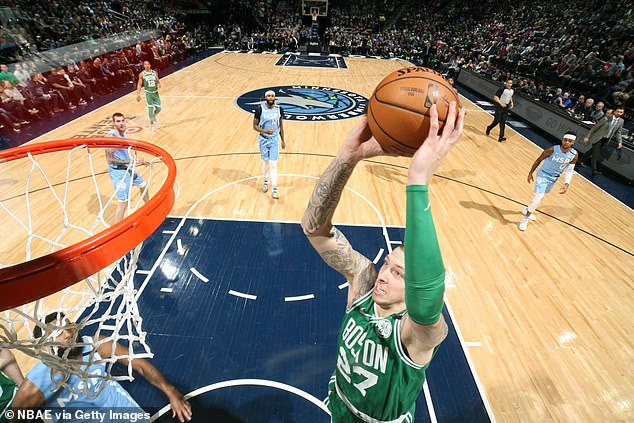 Chris Paul continues to roll back the years as he inspired the Oklahoma City Thunder to an impressive win over the Denver Nuggets.

Paul ended with 29 points, Steven Adams had 19 points and 17 rebounds and Shai Gilgeous-Alexander added 11 points, nine rebounds and nine assists for the Thunder. They have now won 11 of their past 14 games.

Nikola Jokic scored 32 points on 12-for-15 shooting and Jamal Murray added 21 points for the Nuggets as they entered the night with the second-best record in the Western Conference.

But it was Paul who was the star and he banked in a shot and was fouled with 2.7 seconds left in the first half to tie it, but missed the free throw and the score remained 48-all at half-time.

Oklahoma City, as it has done so often this season, took over in the final period. A dunk by Nerlens Noel on a lob from Dennis Schroder put the Thunder up 95-85. A dunk by Adams gave Oklahoma City a 109-97 edge with just under two minutes remaining. 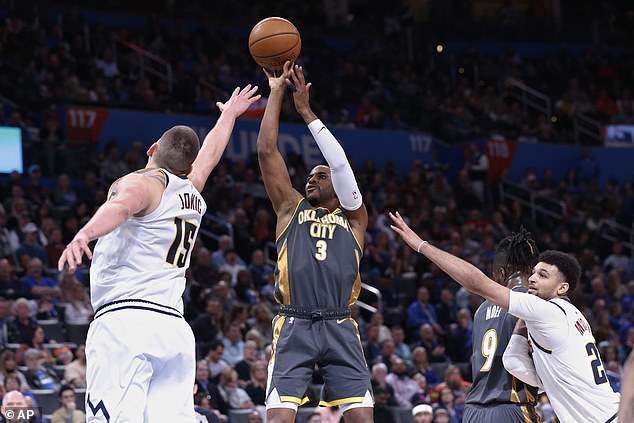 T.J. Warren had 27 points and eight rebounds, leading the Indiana Pacers to a 106-98 victory over the New York Knicks on Friday night in their return from the All-Star break.

Domantas Sabonis added 24 points and 13 rebounds for the Pacers, who won their second straight after a six-game losing streak.

Victor Oladipo finished with eight points in the first game since his minutes restriction was lifted. But Oladipo, in just his eighth game after returning from a year absence with a ruptured quad tendon in his right knee, didn’t play in the fourth quarter and logged just 25 minutes.

Bobby Portis scored 19 points and RJ Barrett had 17 for the Knicks, who have lost three in a row. Leading scorer Julius Randle shot two for nine and finished with seven points and seven rebounds as they continue to struggle in the Eastern Conference. 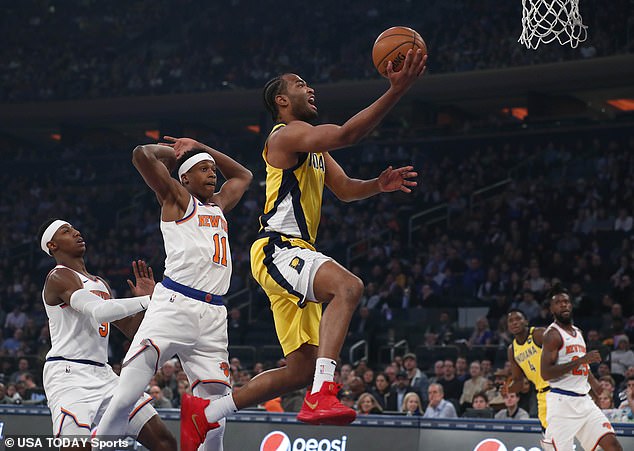 Luka Doncic nearly bagged yet another triple-double as the Mavericks star finished the night with 33 points, 10 rebounds and eight assists in a win over Orlando Magic.

Maxi Kleber added a career-high 26 points off the bench as the Mavericks improved to 19-8 on the road this season. They won just 18 road games combined the last two seasons.

Evan Fournier led Orlando with 28 points, Nikola Vucevic had 27 points and 12 rebounds, and Terrence Ross scored 19 points for the Magic, who were doomed by another dismal shooting night. Orlando made just nine of 43 attempts from 3-point range and shot just 39 per cent from the floor. 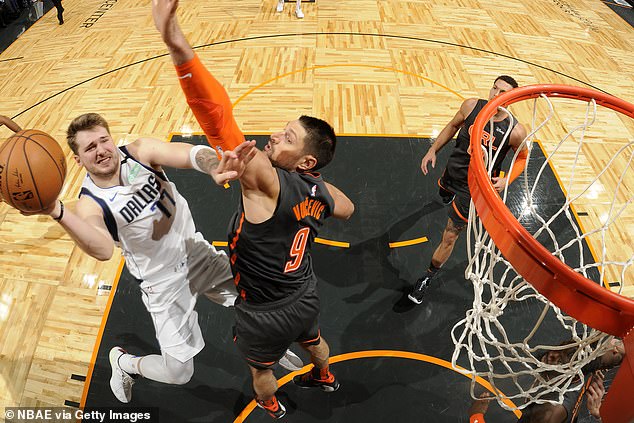 Dejounte Murray had 23 points and seven rebounds, leading a balanced attack that helped the San Antonio Spurs stun the Utah Jazz 113-104 on Friday.

DeMar DeRozan added 18 points and seven assists for the Spurs, while LaMarcus Aldridge chipped in 15 points and eight rebounds. Six players scored in double figures as San Antonio beat the Jazz for the second time this season.

Jazz big man Rudy Gobert finished with 18 points and 14 rebounds to lead the Jazz in scoring. Emmanuel Mudiay chipped in 18 points and Jordan Clarkson added 15 off the bench for Utah.

The Jazz had a four-game winning streak end with the loss as they continue to jockey with the LA Clippers, Houston Rockets, Denver Nuggets and Oklahoma City Thunder for position in the Western Conference play-offs. 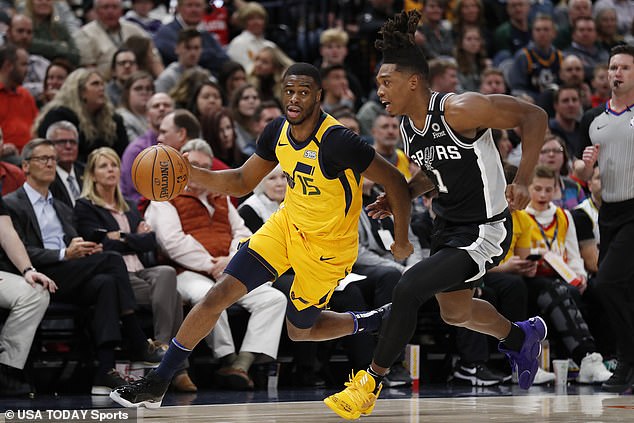 Colin Sexton scored 14 of his 25 points in the fourth quarter and the Cleveland Cavaliers rallied to win in their first game under interim coach J.B. Bickerstaff, beating the Washington Wizards 113-110 on Friday night.

Cedi Osman added 16 points and Darius Garland had 15 to help the Cavaliers win back-to-back games for the first time since January. After those wins, they lost 13 of 15 heading into the All-Star break, resulting in first-year head coach John Beilein’s resignation.

Andre Drummond added 12 points and 12 rebounds, Tristan Thompson had 10 points and 11 rebounds and the Cavaliers took control in the fourth quarter after not leading at all during the first three. 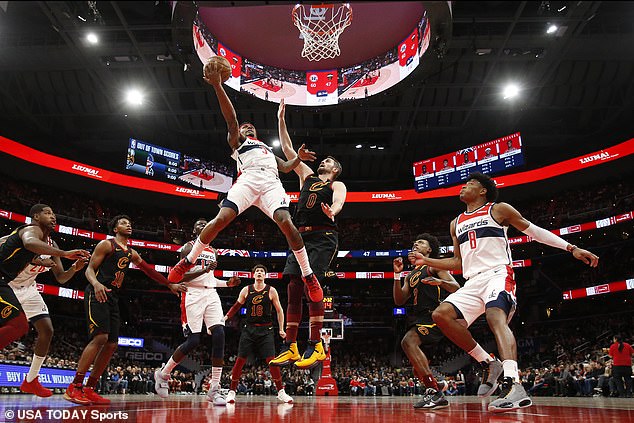 Tags: in, Lakers, LeBron, stars, whi, win
You may also like
Latest Posts