A new star arrived for the Australian Boomers but Patty Mills was once again the hero, making a three on the buzzer to beat Argentina in Las Vegas on Sunday.

The Boomers trailed early and were pushed to the limit by an Argentinian side led by 41-year-old big man Luis Scola (25 points, eight rebounds) but NBA debutante Matisse Thybulle (15 points, four steals, three blocks) starred for the Boomers with some athletic defensive plays before Mills (17 points) stepped up to hit the winning shot as time expired. 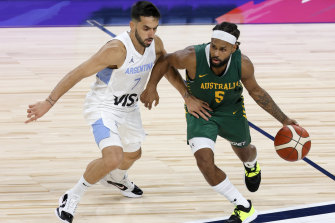 But the second term became a reality check for the Boomers as they fell behind to some brilliant post-scoring from the ageless Scola, who played in his nation’s gold medal win in 2004 and will notch Olympics number five in Tokyo.

His magic was passed on to his younger teammates as Luca Vildoza hit a half-court shot on half-time to extend their lead to 47-42.

The second-half response was the most promising aspect of the game for the Boomers as they came out much better, with Ingles taking more of a role in creating on offence while Baynes, Mills and Dante Exum lifted with Exum playing his first game in 186 days and returning seven points and two steals.

An 18-4 run to end the third term saw the Boomers take the lead on a three from Ingles, while in the final term the teams traded baskets with Thybulle’s three from the left corner putting the Boomers up 82-79 with 90 seconds to play. 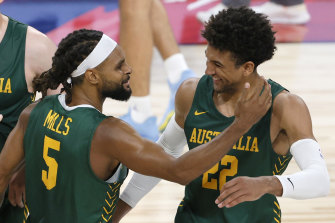 Patty Mills and Matisse Thybulle starred for the BoomersCredit:Getty Images

With scores tied at 84-84 with just two seconds left, the Boomers knew Mills was their man and he didn’t let them down, with Ingles sending his arms aloft in celebration as soon as it left the hands of his long-time friend.

Like Ingles, the Boomers know and trust what Mills can do but for them to win gold in Tokyo, they know they have much more work to come in their three remaining games against the US on Tuesday, Nigeria on Wednesday and the US again on Saturday.

A re-invigorated Nigeria shocked the US with a 90-87 win earlier on Sunday.

Former Cleveland Cavaliers coach Mike Brown has taken charge of Nigeria, who are in the same group as the Boomers in Tokyo, and recruited a number of NBA players with Nigerian roots, with Miami Heat guard Gabe Vincent scoring 22 points and little-known guard Caleb Agada scoring 17 off the bench. Kevin Durant led the US with 17 points.

The Boomers play Team USA on Tuesday at 11am AEST with ESPN showing the game live.