The NBA title winner and Boomers centre is poised to update fans on his playing future on Tuesday morning but both Melbourne NBL clubs and the Brisbane Bullets told The Age on Monday they weren't chasing Bogut, who has spent the past two seasons with the Sydney Kings playing 59 games. 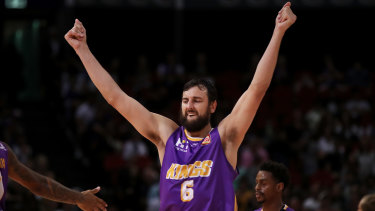 Kings owner Paul Smith in a tweet deferred questions on Bogut's future to the player.

"…Wherever Andrew chooses to play they will be lucky to have him, as were the Sydney Kings," he said.

Bogut has spent the pandemic with his young family while also mulling over whether to play on and chase a medal at the postponed Tokyo Olympics in 2021, or retire as a back injury troubled him through much of the last NBL season.

Bogut tweeted on Monday that he would announce where he is signing next season on his new podcast Rogue Bogues. However, NBL sources were unaware of Bogut signing with anyone on Monday.

The Kings have centres Daniel Kickert and Jordan Hunter on their roster but they also have an import spot, which could be used on a starting centre.

With the Olympics fast approaching, the 36-year old could play on in hope of helping the Boomers to their first medal at an Olympics or World Cup.

The Kings will be different to last season's side, which made the NBL grand final, as coach Will Weaver has joined NBA club Houston Rockets as an assistant coach, star import Jae'Sean Tate has also signed a deal with the Rockets while veteran guard Kevin Lisch has retired.

An NBA return looks difficult for Bogut as the delayed US season, which begins on December 23 AEDT, won't finish with the NBA finals until late July, just as the Olympics are scheduled to begin, which could rule out playing in both competitions depending on entry/quarantine requirements for Olympic athletes.

United has made a big signing for next season with former NZ Breakers import Scotty Hopson signing on. Hopson was nominated for the league's MVP award, averaging 19.1 points per game last season.

"It's a big signing for us and we believe he's got the exact attributes we needed at that position," United coach Dean Vickerman said.

"He's got a fantastic tool belt and can call upon so many different qualities to win; he can shoot the three, take you off the bounce and is a high-level assist guy, not to mention that he's a legitimate closer of games.

"He's just a great competitor. That aggression combined with his well-rounded game means that we think he's going to be able to impact games and really add to this team.

"We're going to be right in the mix this season – this roster is going to be super competitive at both ends of the floor."

The NBL is also hoping to announce its season schedule this week, which has been delayed several times due to uncertainty around COVID-19 and whether crowds can attend home games.

Tags: clubs, Melbourne, out, rule, signi
You may also like
Latest Posts