He may not have been front and centre during his time in the NBA, but learning from the likes of Giannis Antetokounmpo has proven as valuable as playing minutes in Jaylen Adams’ career.

A 25-year-old from Maryland, Adams arrived in Sydney to join the Kings ahead of their 2021-22 season searching for a new experience.

Before this latest move, he had impressively climbed his way from high school basketball to a two-way contract with the Milwaukee Bucks.

After spending hours on the bench with veteran point-guards such as Jrue Holiday and DJ Augustin ahead of him in the pecking order, Adams was eventually waived after just seven games.

He also had the best seat in the house to watch Bucks’ on-court leaders Antetokounmpo and Chris Middleton working their way towards an NBA title.

One of his assistant coaches at the time and now Kings coach Chase Buford offered him a chance to follow him to Sydney. He took it with both hands.

Halfway through his first NBL season, Adams has spoken about his journey across the Pacific and how his time in the NBA gave him the tools to star in the NBL. 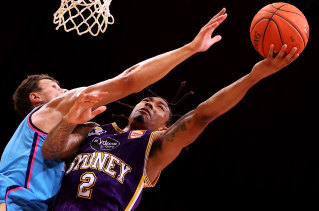 Jaylen Adams in action for the Kings. Credit:Getty

“I’ve done a lot of watching and learning from other guys, but there’s only so much growth you could do just by watching if you don’t have the chance to really apply it,” he said.

“I just really wanted the opportunity to really show what kind of player I am.”

Adams has only just started to make his name known in recent weeks after injuring his ankle one game into his NBL career. That forced him to miss Sydney’s next five matches.

But he has now found spectacular form, including a performance that saw him have 30 points, nine assists and eight rebounds against the perennial powerhouse Perth.

The display against the Wildcats saw Adams become an instant fan favourite.

The one-time St Bonaventure student said he owes his improved performances to his relationship with Buford.

Along with playing under Buford at the Bucks, he worked under the same coach for the Wisconsin Herd in the second-tier NBA G-League.

“I have a lot of respect for him. He cares about winning, but he cares about you as a person and that’s not something you can say about every coach,” Adams said. 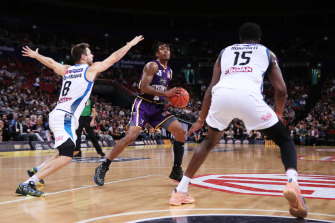 “So when he got the job and this opportunity presented itself, it was a no-brainer.”

Adams is set to make a major difference for the Kings as they enter the business end of the NBL season.

He is hoping his enthusiasm can help the side get over a road hoodoo that has seen them fail to win outside the confines of Qudos Bank Arena.

“Our fans give us energy and I think we do a good job of feeding off that, we’ve just got to find a way to bring that same energy at somebody else’s den,” he said.

“We are not going to have the energy behind us, but we need to find it from somewhere.”