The Suns are in their first NBA Finals since 1993, when Charles Barkley led Phoenix to 62 wins during the regular season and was crowned MVP. We know how that ended, with Michael Jordan and Scottie Pippen completing their historic three-peat with the Chicago Bulls.

Now, 28 years on, they face the Milwaukee Bucks for a first championship in franchise history, after defeating the Los Angeles Lakers 4-2 in the first round, the Denver Nuggets 4-0 in the semi-finals and then the Los Angeles Clippers 4-2 to win the Western Conference.

Before the 2020-21 season tipped off, the Phoenix Suns were a huge 100/1 outside bet for the title, an implied probability of just 1 per cent. In contrast, the Bucks were 5/1, or a 16.7% chance – second favourites behind the reigning champion Lakers.

Given the ongoing uncertainty surrounding Giannis Antetokounmpo’s knee injury, Phoenix head into Game 1 as favourites to go all the way in what is their only playoff appearance for a decade. It’s important to remember three seasons ago the team were rooted to not only the bottom of the West but the league as a whole.

That summer they took Deandre Ayton first overall in the 2018 Draft, traded into the top-10 for Mikal Bridges and re-signed Devin Booker to a five-year $158m contract extension. A year later, however, they were still the worst team in the NBA, compiling a 19-63 record, the second worst in franchise history behind only their inaugural season.

James Jones became general manager, Monty Williams was hired as head coach and slowly, the Suns got better. Devin Booker became an All-Star, the first Phoenix player since Steve Nash, and led the team to an undefeated 8-0 run in the Florida bubble to cap the 2020 regular season.

Chris Paul was acquired from the Oklahoma City Thunder, Jae Crowder signed in free agency and suddenly, after a 51-21 record in 2020-21, they find themselves four wins away from one of the most remarkable championship runs the league has ever seen.

Despite a glittering Hall of Fame career through his 16 NBA seasons to date, there is still one thing missing for Chris Paul: a ring. This will be his first NBA Finals appearance and given his historic scoring performance to eliminate the Clippers, it seems unlikely the Point God is going to let it pass him by.

Even at 36 years young, Paul remains a delight. Unless you are a referee. Or an opponent. Passes threaded from any and every angle, running lobs as light as a feather and those trademark pull-up mid-range jumpers from the right elbow, as automatic as buckets come. To watch him is a window into a deeper understanding of basketball, time and space.

If the Phoenix Suns do end up clinching the Larry O’Brien Championship trophy, you can bet your bottom dollar that Paul will be named Finals MVP, such is his resounding influence on every facet of the game.

Not bad for a guy playing under what Houston Rockets owner Tilman Fertitta called ‘the worst contract in sports history’.

Drafted 13th overall in the 2015 NBA Draft, now proven to be one of the steals of the decade, Devin Booker made his NBA debut two days before his 19th birthday.

Now 24, he has cemented himself as one of the most proficient scorers in the league. Booker has averaged over 22 points per game for the past five seasons and has even amped it up to 27 per contest in his debut postseason.

He eliminated LeBron James from the opening round for the first time in the King’s career with 47 points, torched the Clippers in Game 1 of the Conference finals with a 40-point triple-double and looks every bit as though he belongs on this stage. Booker is going to shine under the bright lights of the playoffs for the remainder of his career, whether this season ends in a ‘chip or not.

Part of the reason we watch basketball is to witness the extraordinary. Every game Booker plays you know there is a chance of that happening. 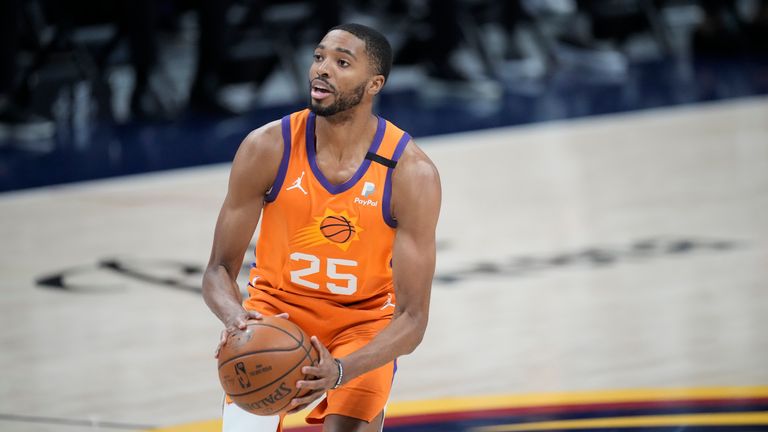 Rather poetically, Phoenix acquired Mikal Bridges with the 10th draft pick owned by the Philadelphia 76ers. That pick had once been the Suns’, part of the compensation sent by the Lakers in return for Steve Nash. The Nash trade officially signalled the end of the electric ‘Seven Seconds or Less’ era, although in reality it had come much sooner with Amare Stoudemire’s move to the New York Knicks.

Losing their two star players to big market teams kickstarted the decade-long post-season drought in Arizona. Drafting Bridges helped the Suns end it. The perfect modern NBA-wing, Bridges is long, quick and has great instincts on both sides of the ball. He can slide across multiple positions on the defensive end and hit his threes at a solid clip down the other.

Along with Jae Crowder’s physicality on the perimeter, Bridges’ All-NBA-level defense (even if it has not been awarded as such yet) helps cover for the deficiencies of the Paul/Booker backcourt. Having won two NCAA championships with the Villanova Wildcats in 2016 and 2018, he knows a thing or two about coming home with silverware on the team bus, too. The glue guy. The heart and soul. Whatever you want to call it. Jae Crowder is every bit as vital to the Phoenix Suns as the stars. A 3-and-D forward like Bridges, the Georgia native serves as something of an enforcer for this team. Understandably so, given the toughness he showed while bruising with LeBron James down low in the first round.

But do not mistake him for all brawn and no brains, Crowder is a savvy veteran who has been an integral part of two deep post-season runs already in his career. He helped the Boston Celtics reach the Eastern Conference finals in 2017 and the Miami Heat reach the NBA Finals last year, losing to a James’-led team each time.

His picture-perfect inbound pass during Game 2 of the Western finals, teeing up Deandre Ayton’s last gasp alley-oop winner, was arguably the single most decisive moment of that series. The level of difficulty and pressure there is insane. Crowder is not a guy to take lightly if you are the Bucks. Winning plays are every bit in his nature.

Then there is the man on the receiving end of that work of art inbound play, Deandre Ayton. The Bahamian center has been something of a revelation during his postseason debut, dominating the paint against Andre Drummond and Anthony Davis, league MVP Nikola Jokic and Ivica Zubac. Few opposition bigs have a good time against this brick wall.

Like Joel Embiid, Ayton started playing basketball later than most, as a 6’5″ 12-year-old in his hometown of Nassau. Similarly, like Embiid, Ayton possesses footwork, agility and speed that does not align with his mountainous frame, meaning he can keep up with guards and wings when switching in the pick and roll as well as remaining a force to be reckoned with underneath the basket.

Ayton perhaps does not score as much as he probably could given his unique combination of size, strength and ability, but with all five starters averaging double digits per game scoring is never an issue for Phoenix.

His brief is simple: gobble up boards, hand the ball off to Paul or Booker, get up the floor, screen hard and attack the rim. There are post-ups thrown in, he is more than capable of getting easy baskets down there, but the old-school rim-rocking is where he truly excels.

With Paul’s artist hands on the ball, Ayton has no better team-mate to feed him.

It feels like everyone on this Suns team has a powerful background story driving them towards the title. Payne is no different. In 2017, a source within the Chicago Bulls was quoted as saying that from the second practice, the team knew he could not play at an NBA level.

He was a mid-first round draft pick by the Oklahoma City Thunder, serving as understudy to Russell Westbrook, before being traded to Chicago. There he was regularly sent to their D-League (now called the G-League) affiliate. A few years later Payne looked on the verge of crashing out of the NBA altogether, signing a couple of short contracts with the Cleveland Cavaliers and Toronto Raptors before being waived by the latter.

A stint with the Shanxi Loongs in the Chinese Basketball Association followed, along with a return to the G-League, before Phoenix came calling.

The back-up guard made his Suns debut in the bubble, helping the team go 8-0 and has not looked back since. In particular, he ensured the loss of Chris Paul due to Covid-19 protocols was scarcely felt in the opening two games of the Western Conference finals, dishing 18 assists for only a single turnover while on stand-in Point God duty.

Payne has nothing to lose in the Finals and will look to light it up from the bench as he did in the first round against the Lakers, averaging 16 points per game and 45 per cent three-point shooting from Game 2 through to Game 5. 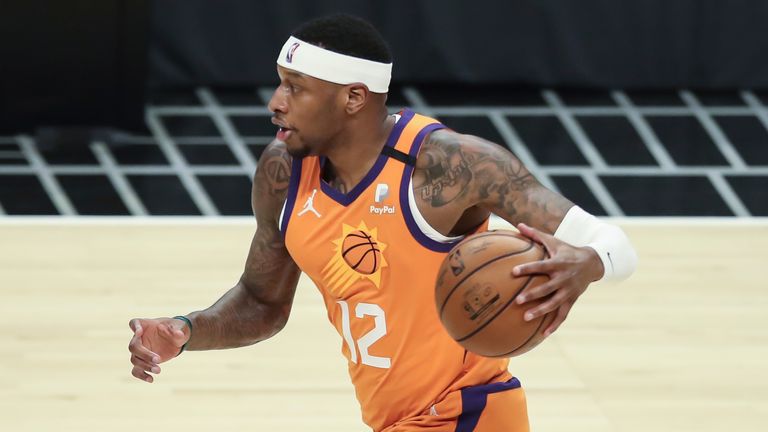 Both Craig and Johnson will rotate seamlessly with Crowder and Bridges, giving the Suns a four-man deep selection of wings to throw at Jrue Holiday, Khris Middleton and Giannis Antetokoumpo (if healthy).

Saric, meanwhile, will come in to stretch the floor at the five position when Ayton rests. 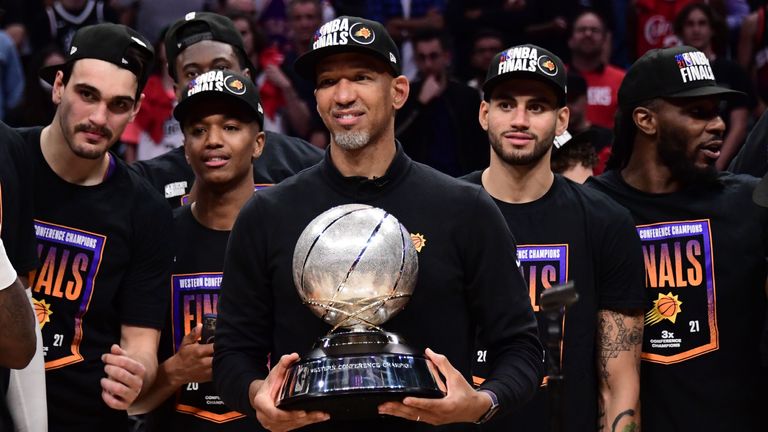 Finally, the man making it all possible. Williams has led the Suns from the lottery to the NBA Finals in just two seasons with an air of calm, quiet authority. It’s clear on the faces of every one of his players he is both respected and adored. It’s clear Williams has earned every bit of that and returns it tenfold. They play for him every bit as much as they do the raucous Phoenix home support.

His journey here started with a first coaching gig, interning with Gregg Popovich’s title-winning San Antonio Spurs in 2005. A full-time post as assistant followed in Portland, where he stayed for five years before becoming the head coach of the New Orleans Hornets, the youngest in the NBA at the time.

There he met Chris Paul, although they would only spend one season together before Williams’ star player was traded away. Paul recently said of their bond, formed a decade ago and lasting only a short time: “Sometimes you have coaches that are just coaches. And sometimes you have relationships that last a lifetime.”

Ten years on, their paths have crossed once again. Now they have the chance to make history together.

Tags: Finals, Meet, NBA, P, preview, THE
You may also like
Latest Posts