The New York Knicks and Charlotte Hornets provided the majority of Wednesday’s NBA excitement in a nail-biting game that came down to the final moments of overtime before it was decided.

Brunson also had 13 assists and seven rebounds. RJ Barrett scored 22 points, and Julius Randle had 17 for New York, at 3-1 off to its best start in 10 years.

‘We kept fighting,’ Brunson said. ‘We found a way to win this game. We stayed poised and kept finding plays to make at the end of the game.’

The Hornets pulled to 132-131 on Washington´s long jumper with five seconds left, and Barrett hit two free throws with three seconds remaining for the final margin. 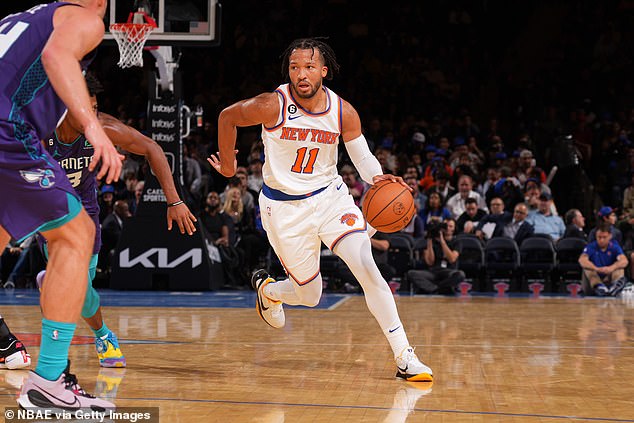 ‘When you´re a primary scorer, you want to be able to step to the line and hit those two free throws in that situation,’ Knicks coach Tom Thibodeau said. ‘He shot them with a lot of confidence.’

The Hornets took a five-point lead, 120-115, with just over two minutes left in the fourth quarter.

‘We had the lead there late in the fourth,’ Hayward said. ‘We didn´t defend the way we should have, could have. That´s what´s disappointing. They hit shots down the stretch and we didn´t.’ 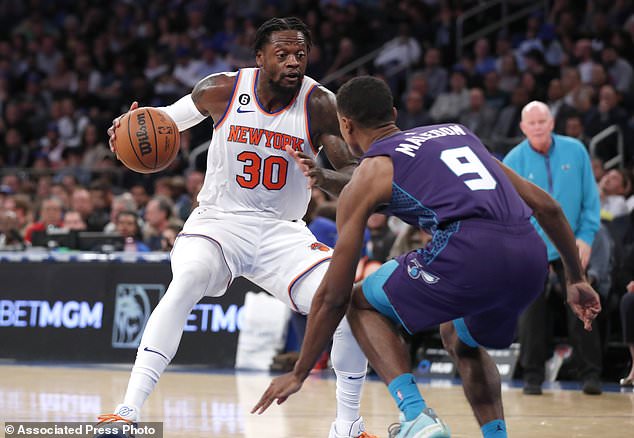 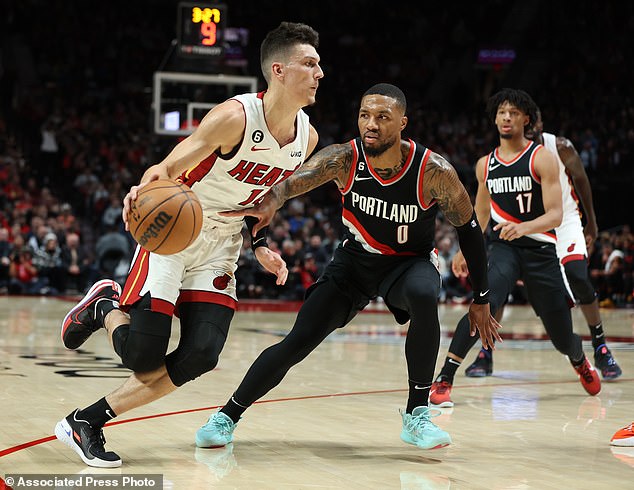 Damian Lillard had 22 points for Portland when he came up limping with just over five minutes to go in the third quarter and headed straight for the locker room. He did not return and the Blazers later announced he had a right calf strain.

Kyle Lowry and Jimmy Butler each had 17 points for the Heat, who led by as many as 26 points. Six Miami players were in double figures.

Rookie Shaedon Sharpe had 15 points and eight rebounds for Portland, which had won each of its first four games to open the season for the first time since 1999. The Blazers were the last remaining undefeated team in the Western Conference.

It was a close first half. Jerami Grant hit a 3-pointer to give the Blazers a 44-36 lead, but Tyler Herro answered with a 3 for Miami.

Herro made a running jumper then added a free throw to put Miami in front 52-51, and the Heat went on to lead 61-56 at the half. Herro finished with 14 points.

After Lillard’s departure, the Blazers struggled offensively the rest of the way. 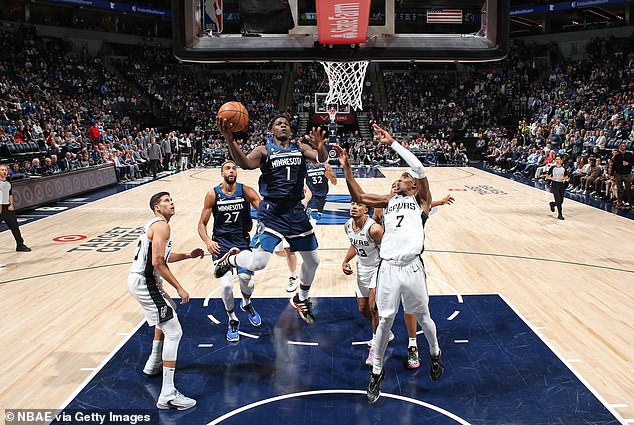 Anthony Edwards scored 34 points, and reserve guard Jaylen Nowell added 23 points for the Minnesota Timberwolves in a 134-122 win over the San Antonio Spurs on Wednesday night.

Karl-Anthony Towns added 21 points for Minnesota, which bounced back after a 115-106 loss to San Antonio at home Monday. Jalen McDaniels scored 20 points for the Timberwolves, who hit a season-high 20 3-pointers.

‘I think we got to take a couple punches in the face to realize that we need to come out like that all the time,’ Edwards said. ‘That punch that we took versus San Antonio the first game kind of woke us up.’

Keldon Johnson had a team-high 27 points for the Spurs, who were without guards Devin Vassell and Josh Primo due to injuries. Doug McDermott added 19.

‘Ant was special tonight,’ Towns said. ‘Went out there and he was him, hit a lot of shots and it translated to us being home, giving the fans that energy, giving us that energy and that comfort.’ 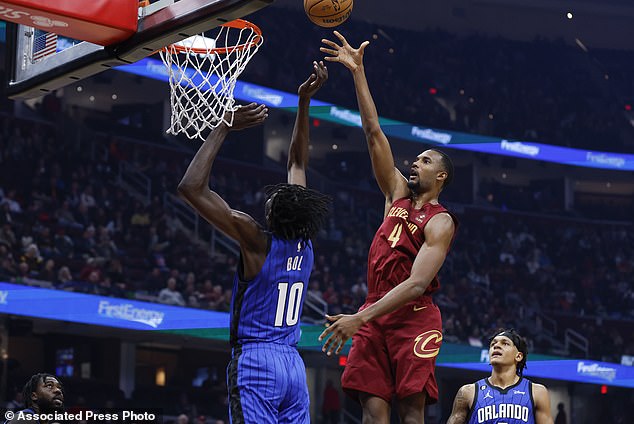 Evan Mobley scored a season-high 22 points, Jarrett Allen had 18 points and 16 rebounds and the Cleveland Cavaliers beat the Orlando Magic 103-92 on Wednesday night.

Donovan Mitchell added 14 points and eight assists for Cleveland, which has won three in a row after dropping its opener at Toronto. All-Star center Allen is averaging 13.5 points and 11.5 boards with three double-doubles.

‘You can work hard and have fun, that´s what Cavs basketball is all about,’ Allen said. ‘Evan showed tonight that he can be one of the best in the league, and we just went out and competed hard. That´s what it came down to.’

Top overall draft pick Paolo Banchero had 29 points, eight rebounds and four assists for Orlando, extending his streak of 20-plus point games to begin his career to five. Orlando (0-5) is the lone team without a victory in the Eastern Conference.

The Cavaliers never trailed in the second half, but failed to push the lead past 11 until Mobley´s power layup put them up 97-85 with 1:37 remaining. Cedi Osman had 14 points and seven rebounds off the bench.

‘Those two big guys, Allen and Mobley, are hard to deal with and they´ve got a lot of weapons,’ said Banchero, who is averaging a rookie-best 24.0 points. ‘I think I´m playing well, but it´s not translating to wins, so I´m not satisfied.’ 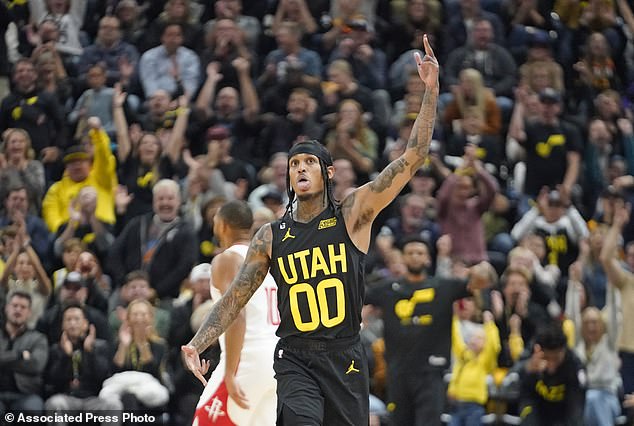 Lauri Markkanen had 24 points and eight rebounds to help the Utah Jazz beat the Houston Rockets 109-101 on Wednesday night.

Utah avenged its lone loss of the season by forcing turnovers and converting takeaways into numerous transition baskets. The Jazz finished with a 25-8 advantage in fast-break points and scored 20 points off 18 Houston turnovers.

Utah led 19 points in the third quarter – going up 79-60 on a Clarkson floater – before the Rockets rallied. Porter made baskets on three straight possessions to cut the deficit to single digits and his jumper with 5:39 left in the fourth quarter cut it to 97-95.

Houston could not draw any closer. Beasley´s corner three extended the Jazz’s lead to 106-98 with 54.3 seconds left. 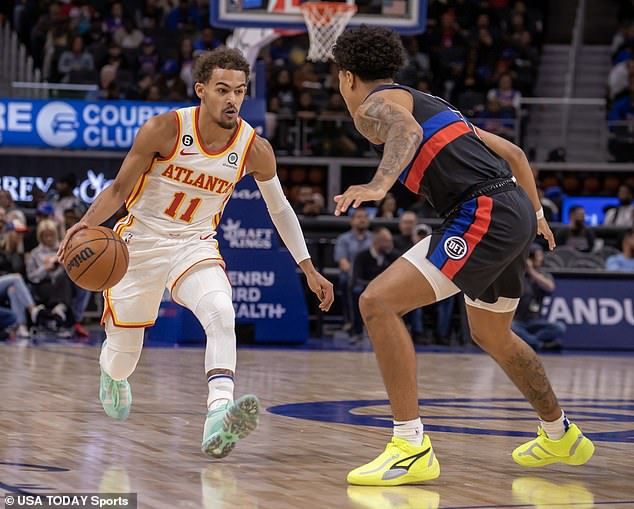 John Collins added 19 points, 10 rebounds and four blocks, and De’Andre Hunter had 17 points to help the Hawks improve to 3-1.

‘We knew we all needed to bring more energy tonight,’ said Clint Capela, who had eight rebounds and four blocked shots in the second half. ‘For me, that’s going to be blocking shots, playing defense and getting after rebounds.’

Bojan Bogdanovic scored 33 points for Detroit. The Pistons have lost four in a row after an opening victory. Cade Cunningham added 26 points, seven rebounds and six assists, but had seven turnovers. 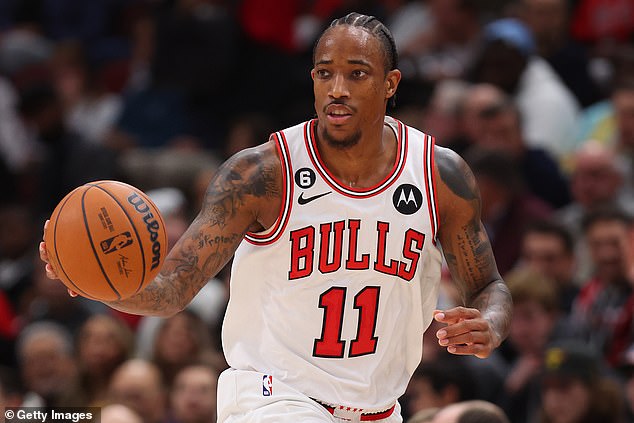 Zach LaVine scored 28 points, including a key 3-pointer early in the fourth quarter that sparked the Bulls to a 124-109 victory over the Indiana Pacers on Wednesday night.

The Bulls led by as many as 24 points in the second half before Pacers guard Buddy Hield hit three 3-pointers that cut the deficit to 95-91 late in the third quarter.

But Indiana forward Terry Taylor was assessed with a clear path foul, allowing LaVine to sink two free throws and the Bulls to retain possession. Andre Drummond converted a dunk, and Javonte Green earned a steal near midcourt and finished with a dunk to enable the Bulls to regain a double-digit lead.

‘Offensively, we’re going to be fine,’ LaVine said. ‘We’re going to find our way because we have so many top offensive players. Even if it’s not going well, one of us will be able to get charged up.’

DeMar DeRozan, attempting to become the 50th player in NBA history to reach the 20,000 mark, moved to within seven of the milestone with a 17-point performance. DeRozan entered the game with a 26.8 scoring average, missed his first field goal attempt nearly eight minutes into the first quarter and didn’t score until converting two free throws in the second. 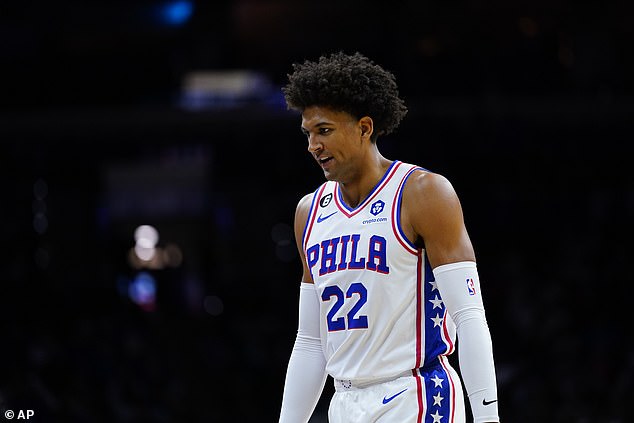 Matisse Thybulle’s strange snub with the Philadelphia 76ers has continued

The 76ers fell to 1-4 after a 119-109 loss to Toronto, Olympic bronze medalist Thybulle an unused substitute as coach Doc Rivers continues to overlook the Australian.

The wing defender played an average 20 and 25 minutes per contest over the last two seasons respectively and claimed All-Defensive Second Team honors in each campaign.

But he has been afforded just five minutes across the first five games of this season, with recruits Danuel House and De’Athony Melton preferred ahead of him despite the side’s defensive issues.

The lack of game time comes after the Sixers opted not to offer Thybulle a contract extension, meaning the 25-year-old former first-round pick will become a restricted free agent at season’s end.