The Australian Opals made a statement to score their first win over Team USA since 2010 just a day after star centre Liz Cambage opted to not go to the Tokyo Olympics.

The Opals beat gold-medal favourites USA 70-67 in Las Vegas bouncing back from a 41-28 half-time deficit to go on a 20-6 run in the late third and early fourth quarter while forcing the USA into 18 turnovers. 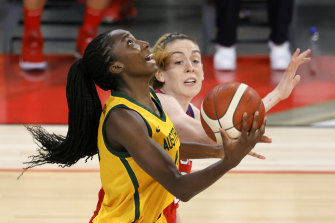 Ezi Magbegor of the Opals shoots against Breanna Stewart of the USA in Las Vegas. Credit:Getty Images

Opals centre Ezi Magbegor top-scored with 17 points, five rebound and three steals while replacing Cambage as starting centre, the 21-year-old Victorian comes into the Olympics after impressing in the WNBA this season.

USA superstar Brenna Stewart, who plays with Magbegor at Seattle Storm, had 14 of her 17 points in the first half and will be much more dominant next time the teams play.

“We knew we were down but we had the rest of the game to go,” Magbegor told broadcasters post game.

“We came out strong in the third quarter and were able to keep going at the end.

“We have 11 other players on the team and we all had to step up.” 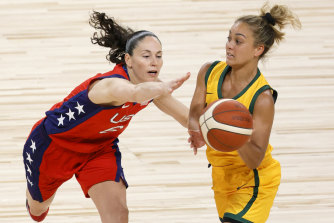 Leilani Mitchell of the Opals passes against Sue Bird.Credit:Getty Images

The Opals went to Magbegor early to remind the first-time Olympian that she has a bigger role to play in the offence now and she responded with six points as Australia took a 13-11 lead.

Points were hard to come by close to the basket but the Opals were making their outside shots as the USA bounced back to tie scores at 19-19 at quarter-time.

“They play a little more freely without her [Cambage],” – USA assistant coach Jennifer Rizzotti noted during a chat with broadcasters.

But the second term was all Team USA as WNBA superstar Breanna Stewart caught fire to enter half-time with 14 points as USA lead 41-28.

The Opals trailed on the rebound count 27-16 and had only two points in the paint, two eras Cambage would have had a big impact on.

But instead of pining about her absence, the Opals adapted and adjusted after the break creating more room for backcuts and moves to the basket gradually cutting back the lead as Rebecca Allen, Steph Talbot and several others lifted.

A three from Cayla George cut the lead to 56-51 heading into the final term and the Opals kept firing going on a 20-6 run between the late third and early fourth quarter as Talbot’s lay-up put Australia in front.

Stewart’s first bucket of the second half tied scores at 66-66 with under three minutes to play and Jenna O’Hea fed Marianna Tolo for a lay-up to take a 70-66 lead with less than two minutes left.

USA had one last chance to tie the scores and force overtime but their three-point attempt missed and the Opals briefly celebrated before going back to their warm down.

They have bigger games to come.

Tags: -, 'No, Liz, Opals, ups, worries
You may also like
Latest Posts