There is no greater champion than Bill Russell.

Russell, who died Sunday at the age of 88, won 11 NBA titles, two NCAA championships and an Olympic gold medal during his career as the defensive force and the centerpiece of the Boston Celtics dynasty of the 1960s.

Here’s a look at the numbers behind Russell’s Hall of Fame career, his battles against fellow legend Wilt Chamberlain and how Russell revolutionized how NBA defense was played. 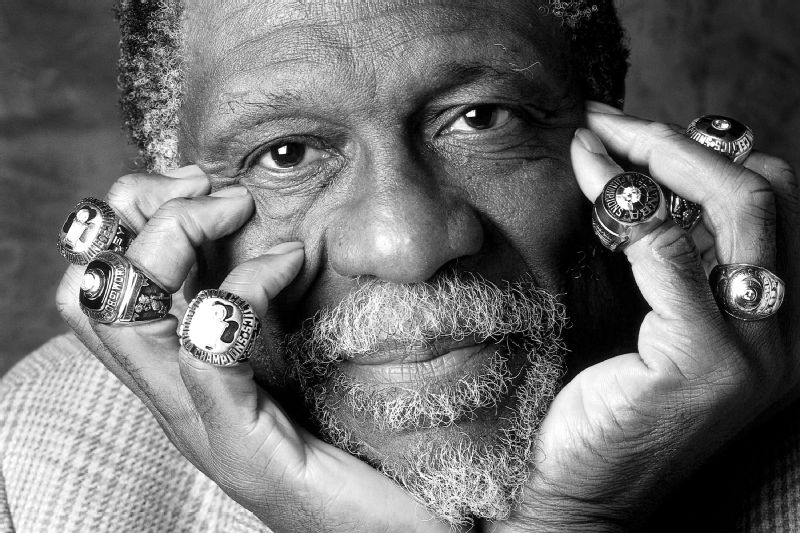 The Celtics were beyond fortunate to draft Russell out of San Francisco in 1956 — they built a dynasty around the rangy center, and dominated the sport until his retirement in 1969.

“Success is a result of consistent practice of winning skills and actions,” Russell once said. “There is nothing miraculous about the process. There is no luck involved.” 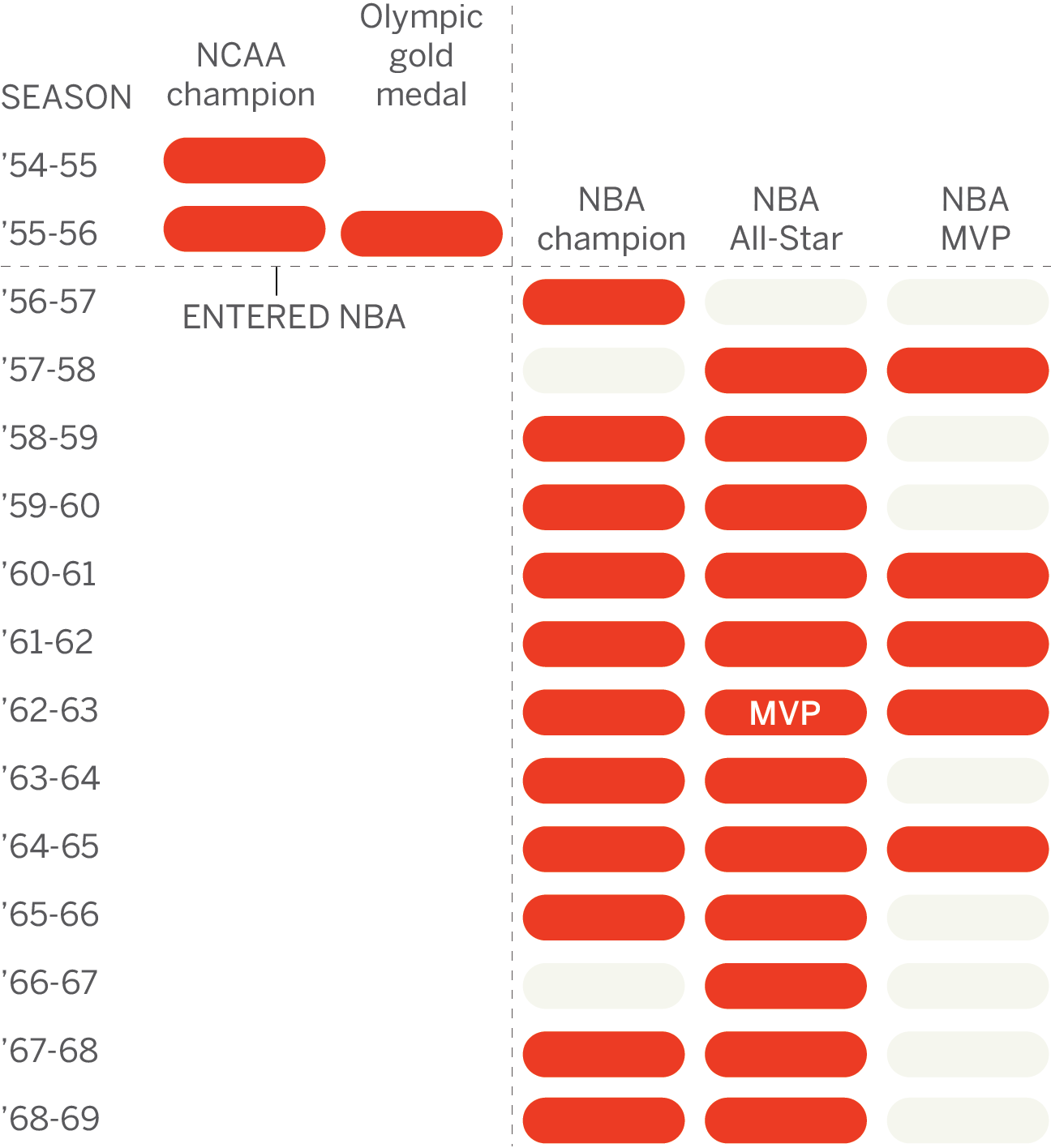 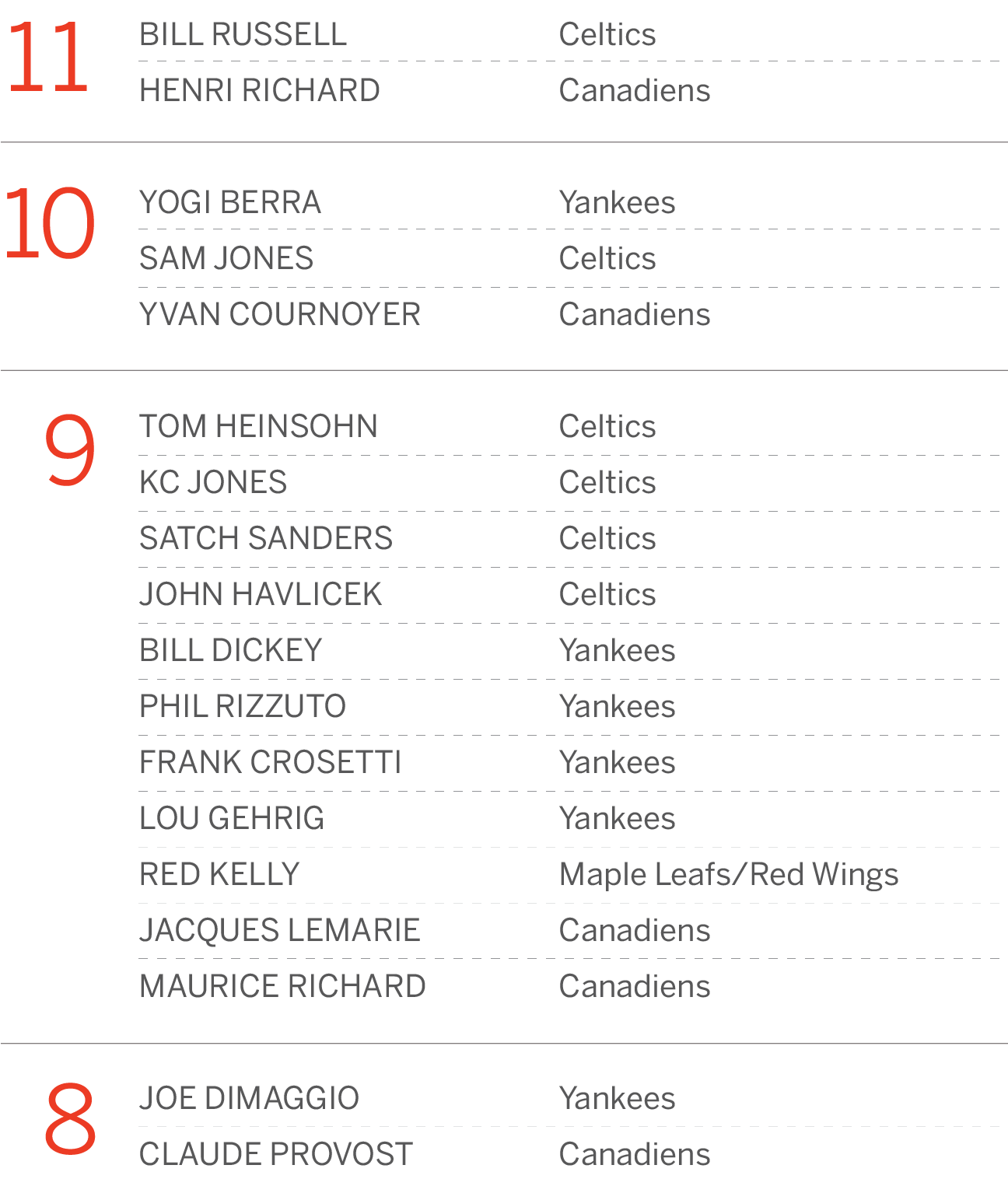 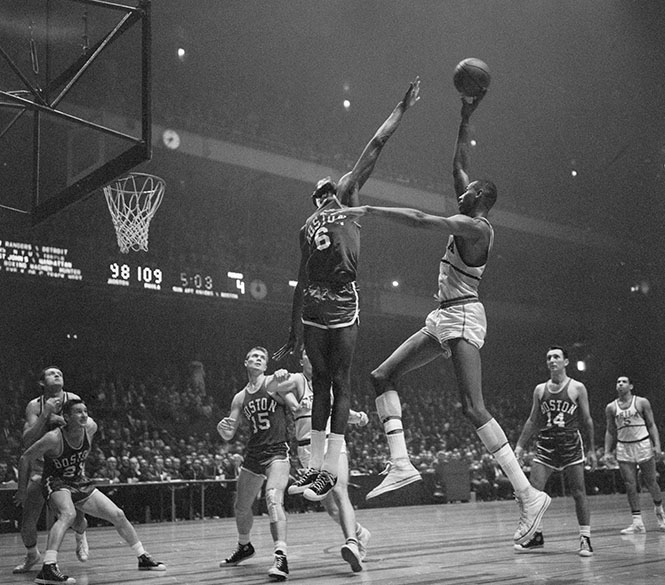 Wilt Chamberlain entered the NBA for the 1959-60 season and began an epic 10-year rivalry with Russell. Counting the regular season and the playoffs, Russell’s Celtics were 86-57 against Wilt Chamberlain’s teams for a .600 winning percentage.

“We were forced to play against the Celtics 11 to 13 times during the regular season,” Chamberlain said. “And if you think that wasn’t enough, then we had another seven games against them in the playoffs, if it went seven games. So I had a chance to see William Felton Russell much more than I wanted to.” 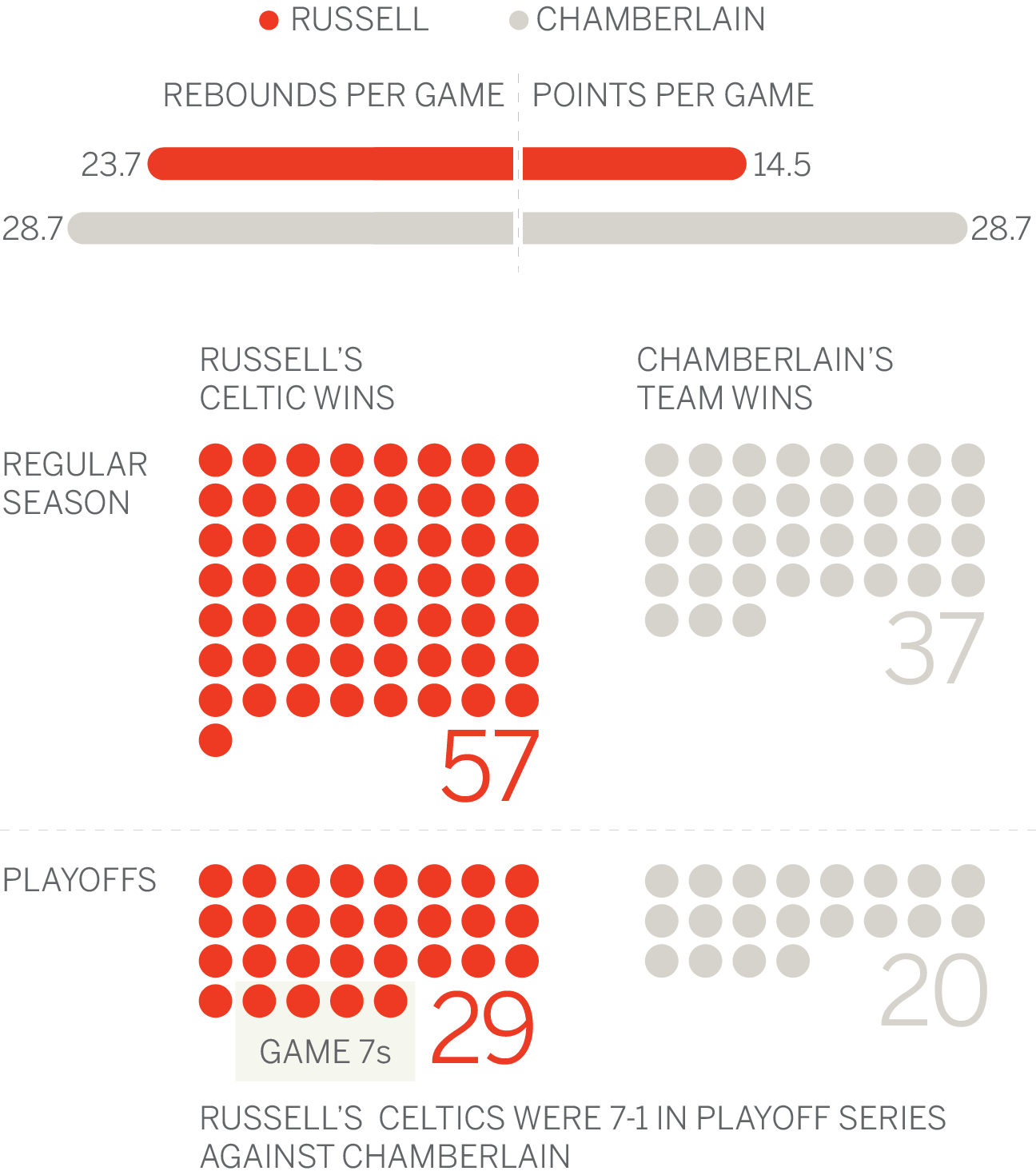 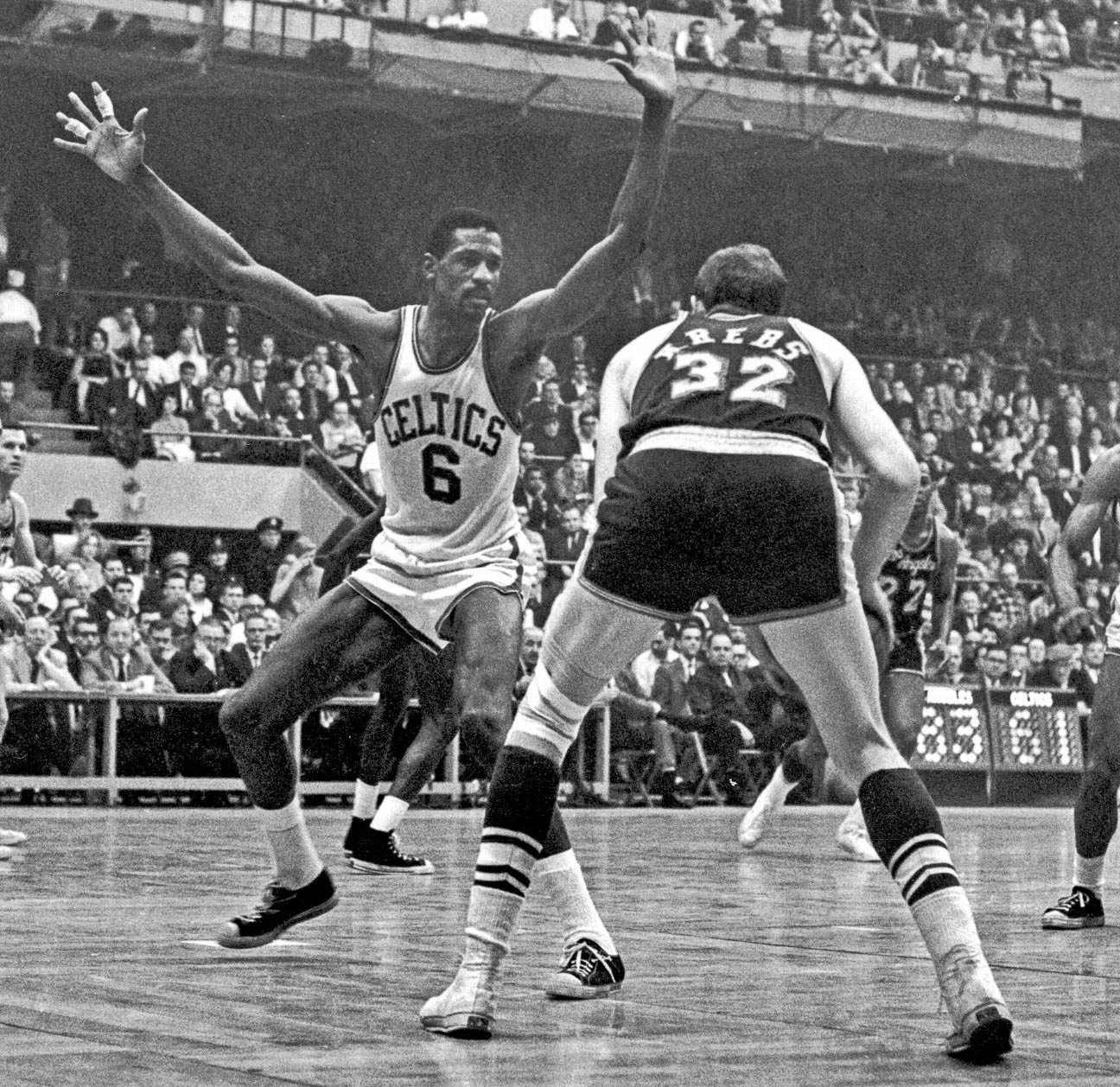 Former Celtics coach and president Red Auerbach said it best: “Russell single-handedly revolutionized this game simply because he made defense so important.”

While Russell contributed significantly on offense, his identity was tied to his defensive performance. He led the league in defensive win shares in 11 of his 13 seasons, including 10 straight from 1958 to 1967. That total is truly remarkable — no other player led the NBA in this category more than five times (and only George Mikan and Tim Duncan did so). 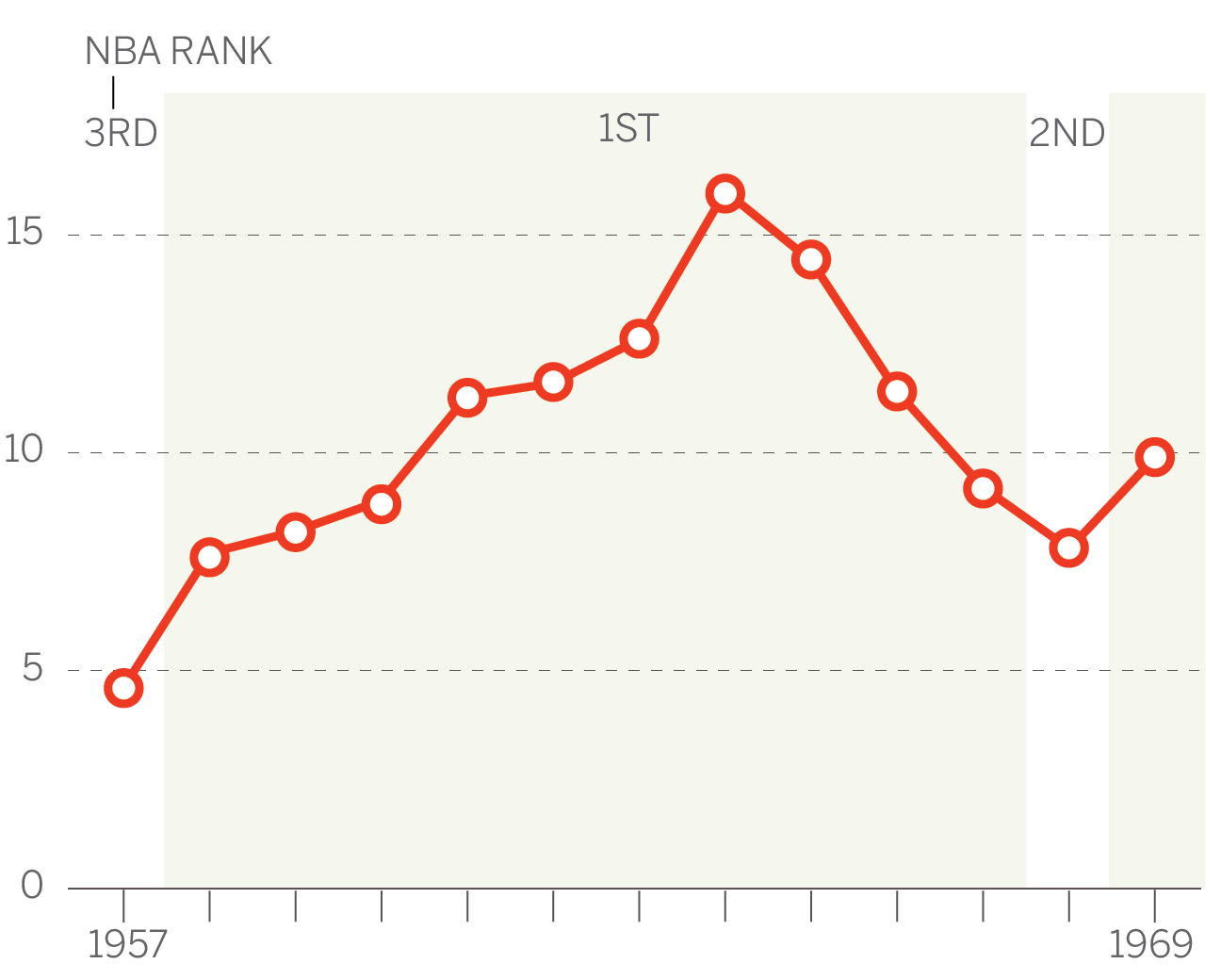 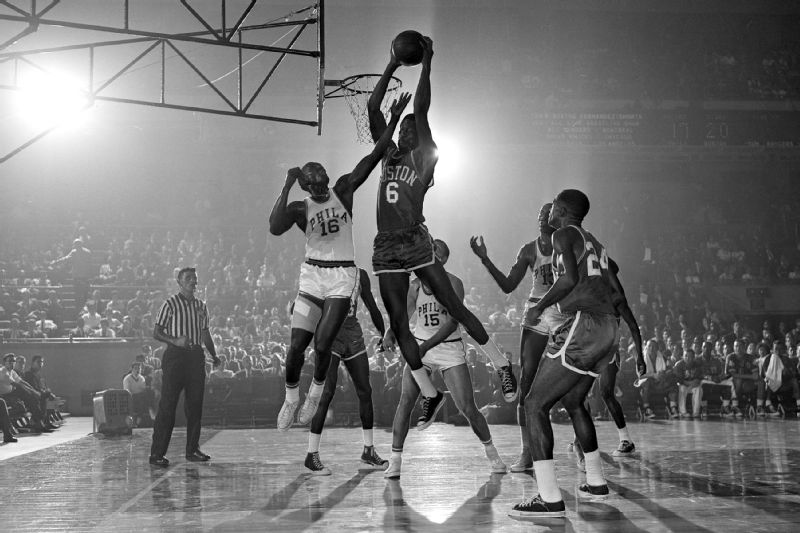 As good as he was game in and game out, Russell found a way to perform even better when the stakes increased for the playoffs. Here’s a breakdown of his career numbers, along with the increase or decrease in the postseason compared to the regular season: 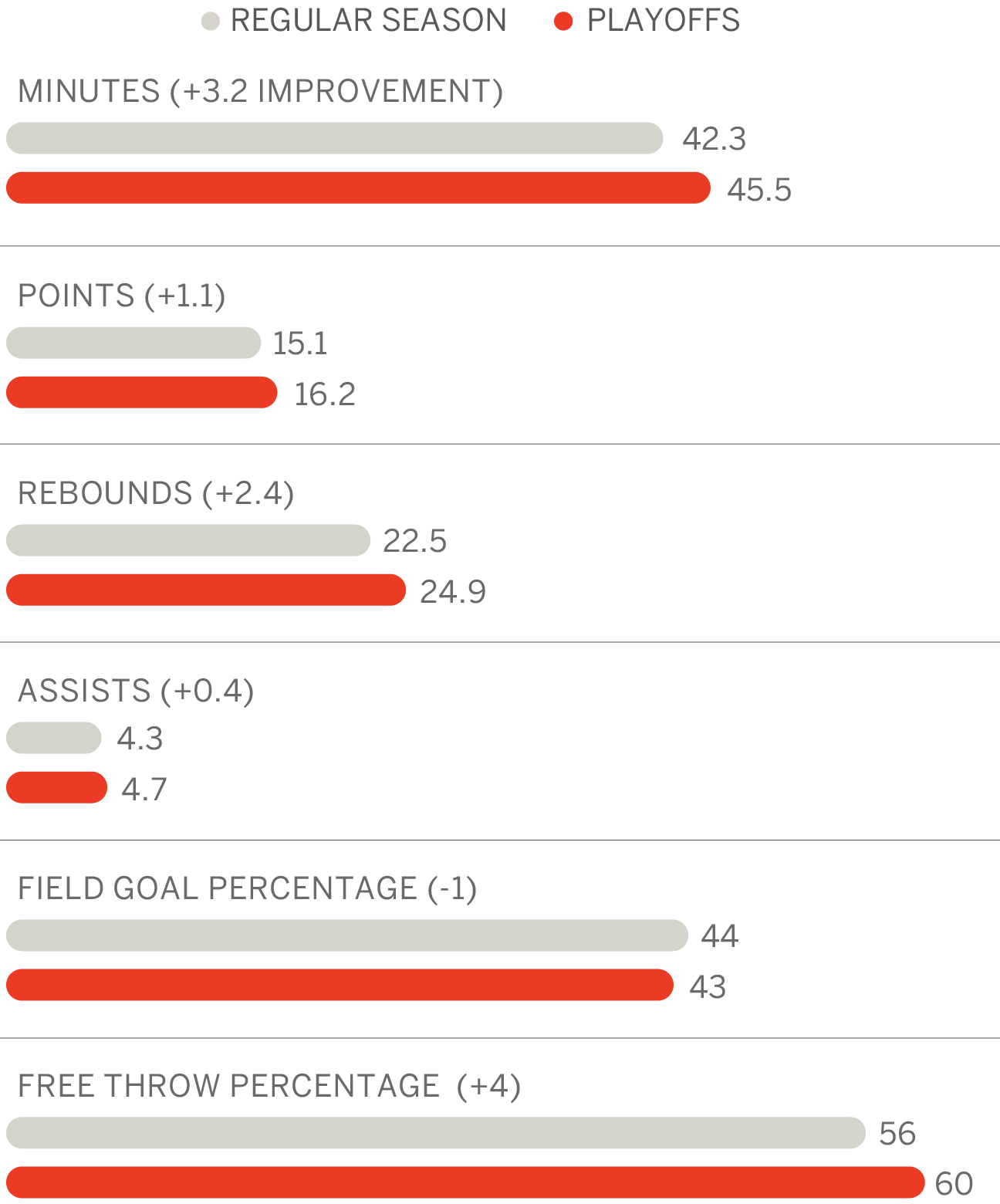 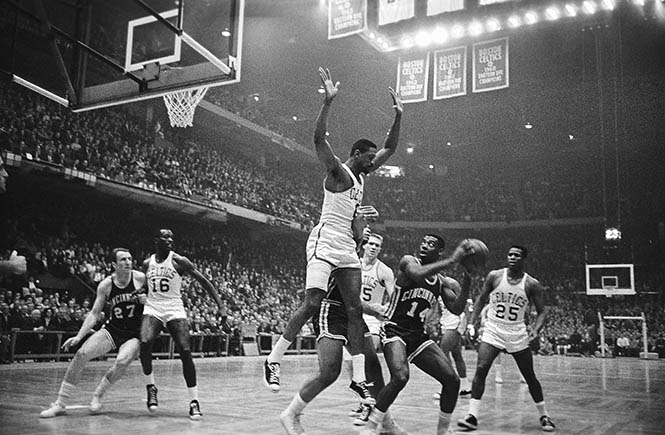 Assists per 36 minutes for Russell. Though he’s not known for his passing as much as other facets of his game, that total puts him third among Hall of Fame centers, behind only Bill Walton (4.3) and Wes Unseld (3.8).

Seasons in which Russell was league MVP, tying him with Michael Jordan for second all-time. Kareem Abdul-Jabbar edges them with six MVP seasons.

Players, including Russell, who won an NCAA title, an Olympic gold medal and an NBA title.

Total defensive win shares for Russell, the most by any player. Trailing him are Tim Duncan (106.3), Abdul-Jabbar and Hakeem Olajuwon (94.5) and Chamberlain (93.9).