In a move set to significantly boost the footprint of the South East Melbourne Phoenix throughout Asia, the NBL franchise has signed star Chinese big man Zhou Qi for the next two years.

The 216-centimetre Zhou was selected by the Houston Rockets in the second round of the 2016 NBA draft and has been a regular member of the Chinese national team since making his debut in 2014. 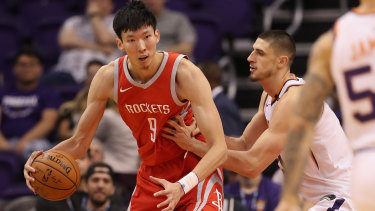 Zhou Qi backs down Alex Len during a Houston Rockets game against the Phoenix Suns in late 2017.Credit:Christian Petersen/Getty Images

Zhou, who at 25-years-of-age still has aspirations of returning to the NBA, signed with the Phoenix under the NBL’s special restricted player rule. He will join his new teammates in Australia once the visa process is complete and flights organised.

The second season of his deal is a player option.

Zhou will play for China in November during the World Cup qualifying period before returning to the Phoenix.

Phoenix owner Romie Chaudhari described signing a player of Qi’s calibre as “a landmark move for the Phoenix and the NBL”.

“Bringing Zhou to the NBL further expands the league and the club’s international presence – the signing makes the Phoenix a real player on the global stage”.

Further to that, NBL commissioner Jeremy Loeliger said the deal “speaks volumes of the league’s standing in global basketball”.

“Earlier this week Chinese national team member Chuanxing Liu signed with the Brisbane Bullets and Zhou’s signing [with the Phoenix] reaffirms the NBL as a prime destination for Chinese players looking to make the next step in their career,” Loeliger explained.

“At 7-foot-1, Zhou’s skill set is something we haven’t had before, [and] we think he can help us cement our position at the top of the NBL this year,” he said.

“His dream is to get back to the NBA and we’ll do everything we can to help him achieve that. With our starting point guard from last year Keifer Sykes starting training camp with the Indiana Pacers this week, we’ve shown as a club we can make that happen.”