Clean up on aisle three! Portland Trail Blazers waitress spills tray of drinks courtside after referee bumped into her… and it is the SAME server who was knocked over by LeBron James earlier this season!

One Portland Trail Blazers waitress is having a season to remember after she found herself all over social media having spilled a tray of drinks courtside in the defeat to the New Orleans Pelicans.

With 2019 No 1 draft pick Zion Williamson in town, all the eyes of the NBA were fixed on the Moda Center in Portland and yet it was the courtside waitress who stole the show with an epic drinks spillage.

As she carried a tray of drinks in her left hand with the game ongoing, one of the referees failed to see her coming and backed into her, sending the drinks over, causing the mess. 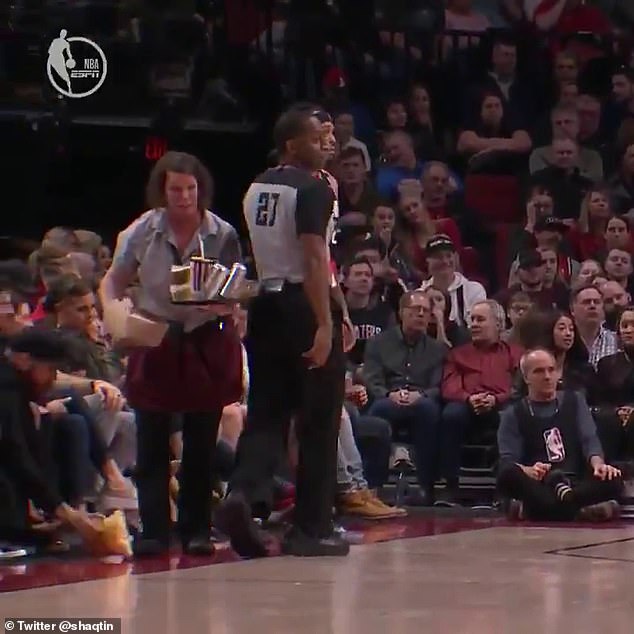 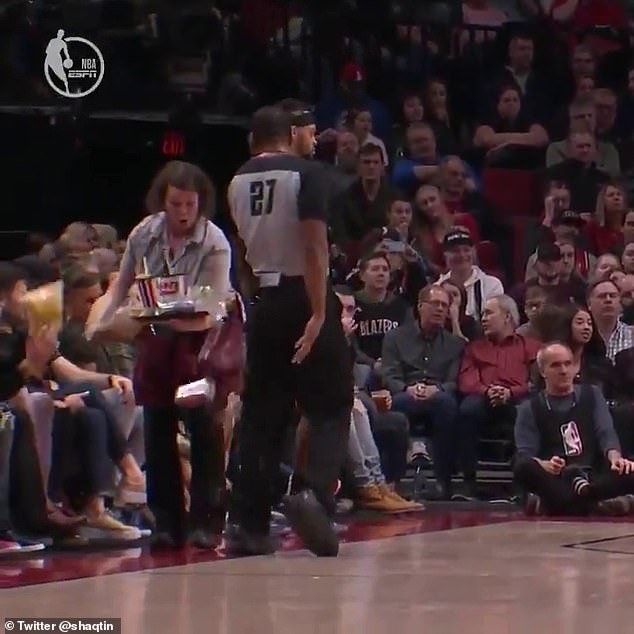 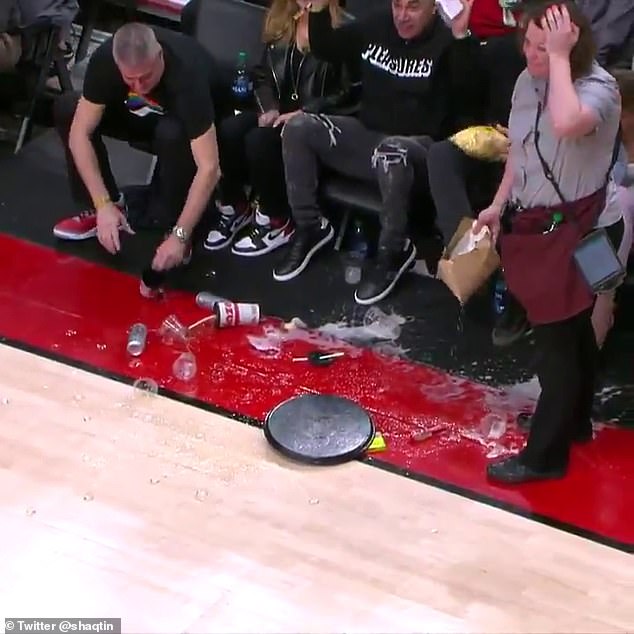 The waitress could see what was to follow the moment the referee had backed into her but there was nothing she could do to prevent every item on the tray spilling out in front of the spectators awaiting their drinks.

Fans were quick to notice that it was the exact same server who had been knocked over by Los Angeles Lakers star LeBron James earlier this season.

James was side-stepping down court in transition and failed to spot the waitress tending to one of the courtside spectators, cannoning her to the floor with their impact. 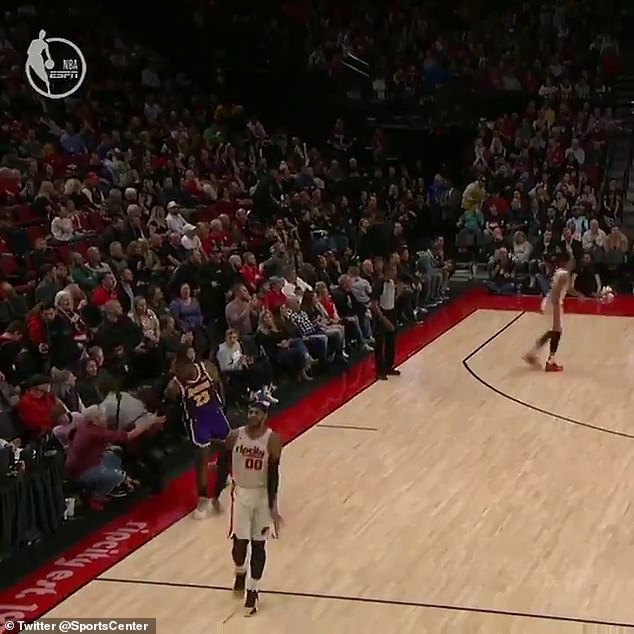 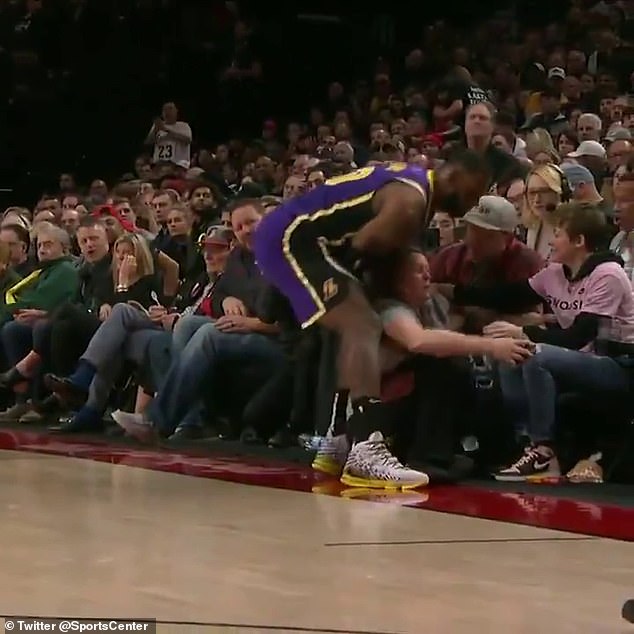 He quickly scooped her back to her feet as she regained her composure and as he checked she was OK following the collision, they shared a hug.

On the court there was a lot less for Portland fans to smile about as they were beaten 128-115 by their fellow play-off contenders Pelicans.

Williamson finished with 25 points for his seventh straight game with at least 20 points, in what was just his 11th game after a right knee injury sidelined him for the first half of the season.

Alvin Gentry’s young Pelicans team, who led by as many as 22 points on the night, have now won four of their last five games to keep their hopes alive of clinching a play-off berth.

The Blazers, who have lost three straight games, were without franchise guard Damian Lillard, who is expected to miss three or more games because of a groin injury that occurred in Memphis last week. It kept Lillard out of the All-Star Game and the 3-point contest last weekend. 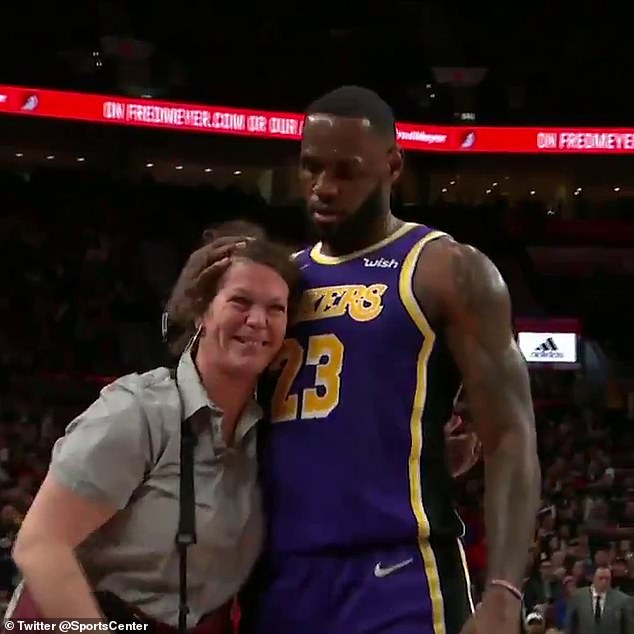 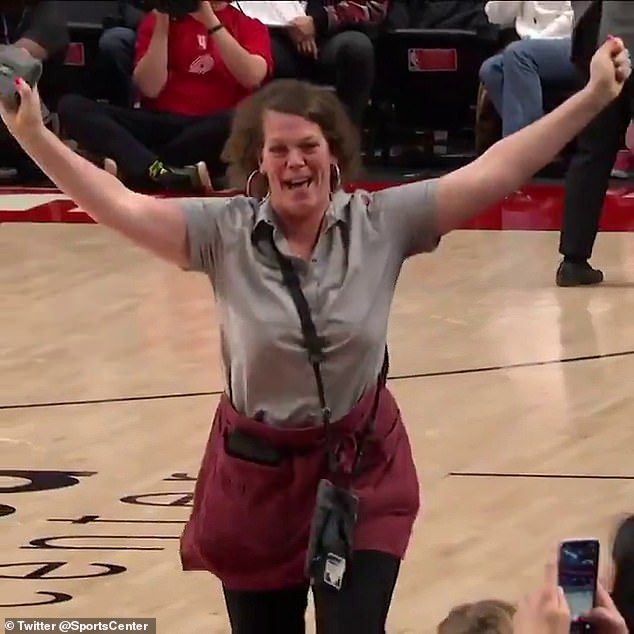 Lillard is averaging a career-high 29.5 points and 7.8 assists per game. His absence hurts the Blazers, who went into the game 3.5 games back of Memphis for eighth in the Western Conference standings.

The Pelicans were among four teams, along with the Blazers, fighting for those last play-off berths with just a third of the season left. Coach Gentry said he’s treating the last 27 games like a college season.

‘We want to play to get into a tournament. We want a high seed. Those are the things that we’ve talked about. Obviously, we have to play good basketball,’ Gentry said.

The Pelicans also won the previous three meetings this season with Portland. Earlier this month in New Orleans, Williamson had 31 points and nine rebounds in a 138-117 victory over the Blazers. 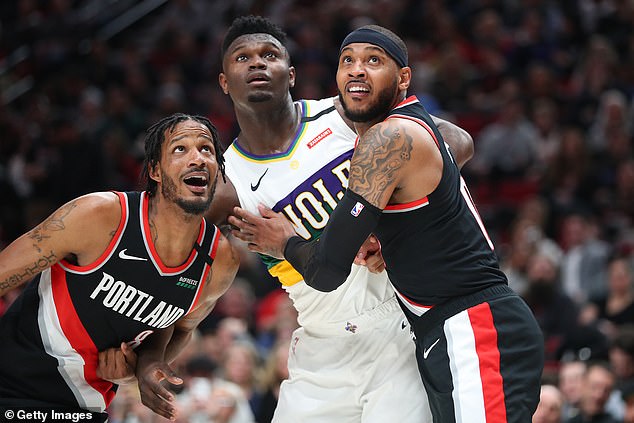 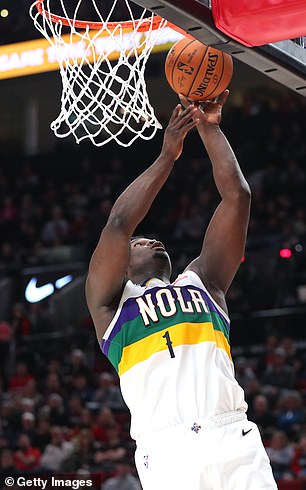 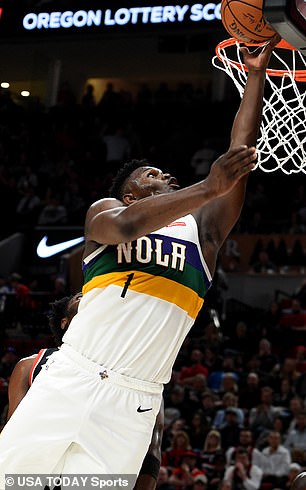