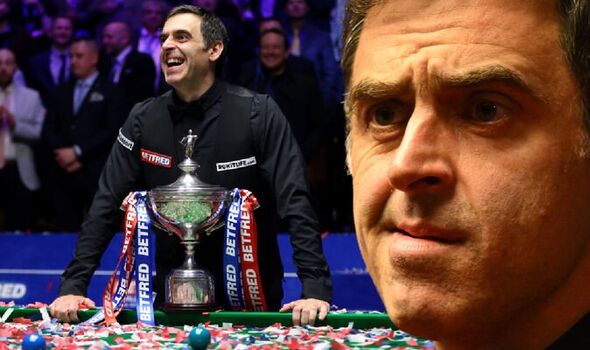 A year in the life of Ronnie O’Sullivan got the fairytale ending – but it won’t be the last dance for the Rocket. The 46-year-old is being hailed as the greatest player in history after equalling Stephen Hendry’s record of seven world titles with an 18-13 win over Judd Trump at the Betfred World Championship. But he’s not one of those who believes he truly is the GOAT.

World No 1 O’Sullivan, the oldest ever Crucible champion, is not done yet – suggesting Hendry may only get to share the record for a year, and that he could play into his 50s and go for 10.

O’Sullivan again recognised the huge part sports psychiatrist Steve Peters has played in his career. Four of his world titles have come since Peters stopped him from quitting in 2011.

And despite the torrents of praise and acclaim coming his way, the Rocket claims he is not and never will be ‘the greatest’. He added: “If it hadn’t have been for Steve Peters I would probably be in some hot country like Portugal living in a nice beach house and coming to the UK once every six weeks to see my family.

MUST READ: ‘Don’t listen to him’ John Parrott accuses Ronnie O’Sullivan of lying

“The size of winning the seventh title and the enormity of it is so important to everybody – and I can feel that. But I don’t consider myself the greatest ever at all.

“There are a lot of players out there that I wish I had elements of their game in my game. Does it really matter who’s the greatest? Not to me – we all make this sport fantastic, and I won’t consider myself the greatest even if I win eight.”

The fly-on-the-wall film documentary crew that have been following him around this season were able to capture momentous moments in the iconic Sheffield arena. Having spent years insisting records meant nothing to him, the images of an overwhelmed O’Sullivan sobbing in the arms of beaten opponent Trump and celebrating with his children told a different story.

And O’Sullivan was quick to see parallels with the film about basketball legend Michael Jordan’s last 1997-98 season with the Chicago Bulls that saw the NBA superstar win a sixth championship.

O’Sullivan said: “I loved that documentary The Last Dance about Jordan’s final season at the Bulls.  And this a bit of a dream ending to mine, the guys have been following me six or seven months.

“You couldn’t have envisaged this – they have had a result. I loved Michael’s energy, professionalism and his confidence. He knew how to get the best out of people. He let Dennis Rodman go to Las Vegas for a few days because he needed it.

“Then he didn’t come back so he had to get on a plane and go and get him. It was a great insight, there were so many different characters. It’s harder in an individual sport, definitely.

“I said to Steve Peters that I wished I was in a team sport. At least then you can take a week off or be rested for a bit. You can have that relationship with your manager where you can kind of pick and choose when to play.

“In an individual sport you’re kind of forced to play even if you feel you don’t want to. So it’s tougher, but I chose this sport and there’s not a lot I can do about it now. I’m good with pressure so having the crew around wasn’t an issue.  In some ways, it might have inspired me. And things just seem to work out – so I’m not surprised that it ended like that. And it wasn’t all Sheffield, hopefully a load of it gets in there.

“In Llandudno they asked me what I normally do and I said ‘I go out running at eight in the morning, if it’s p**sing down with rain I’m still going out’. They got in the car and followed me, and got me running up the Orme – and it was p**sing down. Whatever I have done, they have followed me. Everything has been as it is.”