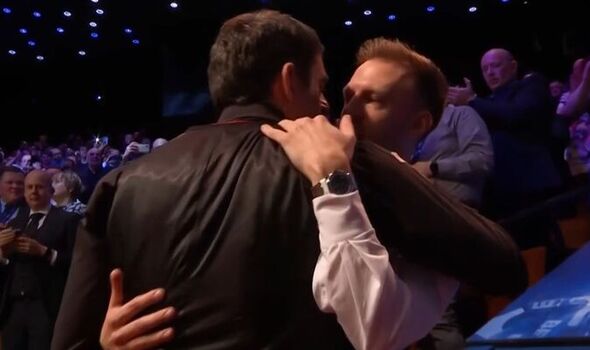 Ronnie O’Sullivan has opened up on the emotional embrace he received from Judd Trump after winning his seventh World Championship title. O’Sullivan held a strong lead heading into Monday’s afternoon session but Trump battled back to 14-11 after winning six of the eight frames played.

The pressure was on for the ‘Rocket’ to turn that form around in the evening session with a chance at history on the cards. And he rolled back the years with some brilliant runs, winning 18-13 in the end to match Stephen Hendry’s record of seven world titles.

O’Sullivan also became the oldest world champion in Crucible history at the age of 46. There was a special moment between the two finalists when O’Sullivan won his 18th frame as O’Sullivan went up to hug Trump.

The pair were pictured speaking for over a minute with O’Sullivan seen welling up during the embrace. And O’Sullivan has explained just how much Trump’s private words during their embrace meant to him.

“I was so emotional. To finally get over the line, I just thought it would never happen,” he said on Eurosport. “I gave him a big hug and I was just sobbing in his arms. And he said such lovely words.

“What he said to me blew me away to be honest. It just blew me away. I love Judd. I love him, he’s a great lad, and I didn’t realise what he thought of me until then. Different respect there, you know. I didn’t realise how he sees me and how I’ve been part of his development.

“It’s great for snooker that we’ve got someone like Judd, playing the way he plays. There’s a couple more coming through [Zhao] Xintong, it’s going to be brilliant. That’s my best result ever I think.”

O’Sullivan’s tears continued when his wife and kids rushed down to see him before he took a seat in his chair to recompose himself. The snooker icon needed a moment to wipe away his tears with his towel before stepping back up to be handed his seventh world title.

Hendry has held the record for most world championships since 1999 and, while O’Sullivan has downplayed his record-equalling feat, the 46-year-old has confirmed he will be back next year to defend his crown.

“We can share it for a year. I tried to be as relaxed as I could, but that is probably the greatest result I’ve had against somebody like Judd,” O’Sullivan said. “I’ve never bothered about records. When you get them, it’s kind of nice. I don’t have targets. I’ve loved every tournament this year, I’ve just loved playing.

“I like to win, but it’s not the be-all and end-all. The Crucible brings out the worst in me. It’s probably not the best idea but we’ll probably go again next year.”