Dallas Mavericks’ billionaire owner Mark Cuban has savaged NBA referees after his side was cost a chance at a win following a controversial call to finish their match against the Atlanta Hawks.

The Hawks rallied late to beat the Mavericks 111-107 but the match was only sealed with 8.4 seconds remaining.

Watch the 2019/20 NBA Season with ESPN on KAYO. Up to up to 7 LIVE games every week! New to Kayo? Get your 14-day free trial & start streaming instantly >

The Mavs Dorian Finney-Smith was called for goaltending on Hawks star Trae Young’s layup attempt with a whistle blown in the background.

Hawk John Collins grabbed the ball and scored the put back with play seemingly called to a halt by the whistle.

But the officials reviewed the play, awarding the basket, much to the horror of the Mavericks.

Dallas coach Rick Carlisle was asked by reporters if the officials gave him an explanation.

“Not a sufficient one,” he said. “Just a very disappointing way to end the game. Our guys fought their butts off from start to finish. My understanding, if it’s a good block on a goaltend that’s called and reversed, if there’s no control or the other team gets it, it’s a jump ball, so I don’t know. It’s baffling. It’s disappointing.”

Officiating crew chief Rodney Mott told the pool reporter that “the original call on the floor was a goaltend” and that Collins’ basket was allowed because “the ball was blocked and reviewed. The ball hit the rim, so it was deemed an inadvertent whistle. It’s Rule 2. Because (Collins) was in his shooting motion when my whistle blew, it’s deemed continuation, so therefore the basket counts.” 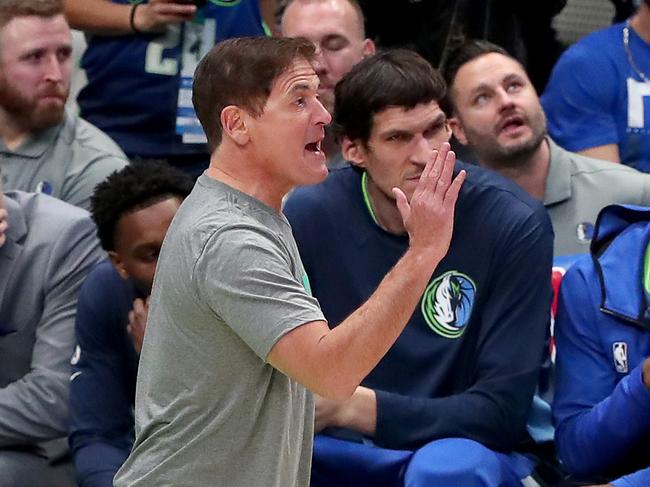 Tell us what you really think Mark.Source:Getty Images

But it didn’t stop Cuban from blowing up on Twitter over the call as he believes the whistle was before the put back.

Just when you think the NBA officiating can't get any worse , guess again. This is absurd

So they call a goaltend. They literally blew the whistle that it was a goaltend. There was a putback after the whistle. After review they said no goaltend but count the basket ? WTF is that ? That's NBA officiating.

But wait there is more. 1 of the refs told us it was an inadvertent whistle, so it was not goaltending. Doesn't matter that people stopped . They thought the whistle came after the putback. So the basket counted. So what where they reviewing if it wasn't a goaltend ? https://t.co/FPnNy1mRKe

And of course that comes after delon intentionally kicked the ball as he was getting thrown down to stop play. They don't , that's the play that would foul out maxi. https://t.co/s2v40xelLL

Refs have bad games. Crews have bad games. But this isn't a single game issue. This is the same shit that has been going on for 20 years . Hire former refs who think they know how to hire , train and manage. Realize 2 years later they can't. Repeat https://t.co/GPqvvWSpuT

In the past 12 years it's been Ronnie Nunn, Don Vaden, Bob Delaney , and now Monty Mccutcheon . What do they all have in common ? You know the definition of insanity ? https://t.co/GPqvvWSpuT

It’s not the first time this season the referees have been slammed this season.

A fortnight ago, Damian Lillard had to be restrained after a goaltending debacle against the Utah Jazz. It appears the timing of the whistle was pretty important.Source:Twitter

Collins didn’t feel too sorry for the moment.

He scored 35 points and 17 rebounds, while Young had 27 points in the fourth quarter.

Tim Hardaway Jr. scored 20 of his season high-tying 33 points in the first half and Seth Curry added 22 for Dallas, with Luka Doncic on the sidelines.

Judging Week 7 overreactions: Should Mike McCarthy be on the hot seat? What about Cam Newton?

Edinson Cavani’s treatment of PSG staff shows what kind of a player Man Utd have signed
Recent Posts
This website uses cookies to improve your user experience and to provide you with advertisements that are relevant to your interests. By continuing to browse the site you are agreeing to our use of cookies.Ok