Curry, speaking to The Age and Sydney Morning Herald from New York City before embarking on a promotional tour of Melbourne and Sydney under a sponsorship deal with sports shoe and apparel retailer Foot Locker, has provided the first insight from a teammate into Simmons’ off-season work. 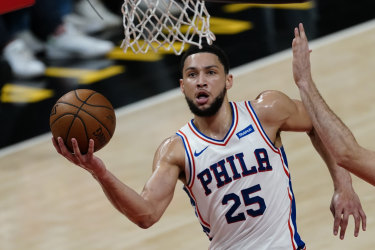 Ben Simmons has been working out in the gym after back surgery but hasn’t played a game since the 2020-21 play-offs when he was with the 76ers.Credit:AP

Simmons has not played a competitive game since the Philadelphia 76ers, the franchise he was with, were eliminated by the Atlanta Hawks in the 2020-21 play-offs. He appeared to fall out with coach Doc Rivers and franchise superstar Joel Embiid, and has since dealt with contractual, mental health and back issues.

“There are always challenges. Foremost, he has missed a whole season. It is going to be a challenge getting his rhythm back playing basketball,” Curry said.

“I don’t know specifically what he has been through, mentally – that’s hard for me to comment on – but having that year off, having that time off, of competing and playing five-on-five basketball is going to be just as hard … just taking some time and getting re-acclimated to playing high-level basketball, but he is a special talent, has all the skills. The Nets need him on the floor.”

Curry, the younger brother of four-time NBA championship winner Steph, was a 76ers teammate of Simmons before Curry found himself packaged with Andre Drummond and two first-round picks when sent to the Nets as part of the blockbuster trade involving Simmons and then Net, James Harden. 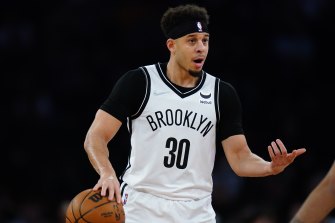 Simmons, a three-time All-Star, had successful microdiscectomy surgery early in the off-season, and he has since been rehabbing his back with a view to fulfilling the five-year, $US177 million (A$255 million) rookie max extension he signed in 2019.

“I have seen him in the facility a couple of times,” Curry said. “Just like I said, [he’s] been doing a lot of shooting, working, working on his body and being in the gym, so, from everything I have seen, hopefully, he will be out there ready to go come training camp.”

Curry said a healthy Simmons provided so much offensively and at the defensive end, where he twice has been named to the NBA all-defensive first team.

“We are going to need what he brings to the table. Obviously, he is an All-Star calibre player,” Curry said.

“Obviously, he is trying to make the most of this off-season, get back healthy physically and mentally. Like I say, he had a year off, it’s going to be good for him to get back out on the court and get re-acclimated.

“He creates a lot of three-point shots for his teammates. Obviously, it helps me a lot, to get good shots. The pick-and-roll game, and the hand-off game, the two-man game … he is a good guy rolling to the rim and finishing. Defensively … he can guard a lot of positions.”

Curry, who averaged 15 points per game in his 19 regular season games with the Nets, and Australian Patty Mills, who re-signed for two years on a $US14.5 million deal, can provide the Nets with a lethal one-two punch from the perimeter.

“Patty has been around for the last few months here in Brooklyn – [he’s] a great leader [with] a lot of energy,” Curry said. “Obviously, [he’s] a veteran and I am trying to learn as much as I can from him. We had some good moments last season, especially when guys were injured at the end of the regular season.” 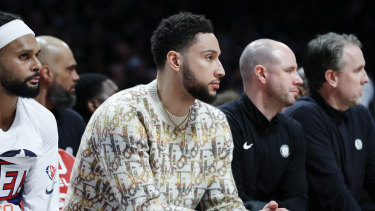 The Nets had a dysfunctional season, in no small part due to Kyrie Irving’s anti-vax stance, and went from championship favourites to being swept by the Boston Celtics in the opening round of the play-offs.

There has been considerable tumult through the off-season, with superstar Kevin Durant asking for a trade and Irving also seeking rival interest. However, there has been little movement, and both men could yet remain with a franchise many had expected them to lead to multiple championships when they signed in 2019.

In the meantime, Curry’s focus is on his first full visit to Australia. Excited about the trip, Curry will conduct clinics this weekend in conjunction with Foot Locker and Charity Bounce in Melbourne (Hoops City) and Sydney (Arncliffe Youth Centre), and appear at Foot Locker Pitt St (Sydney) and QV (Melbourne).

“I am trying to do as much as possible. We have got a lot of Australians on our staff with the Nets and a couple of teammates – they have given me a couple of good things to check out,” Curry said.