Melbourne United veteran Brad Newley has demanded his side stay ready as it remains in a battle to claim top spot on the NBL ladder and home court for the NBL finals.

The Sydney Kings won their 13th straight game on Thursday night, beating the Illawarra Hawks, bringing them equal with United on 18 wins and seven losses, although United still hold top spot via percentage. 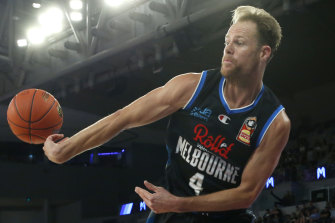 United face Brisbane at John Cain Arena on Saturday and Cairns at the same venue on Monday, and while both teams will miss the semi-finals, they have been looking to play spoilers and won’t give the home side anything easy.

“If you take your foot off the brakes before the finals it can work two ways, you can freshen guys up, or you can lose your rotations,” Newley said.

“So everyone needs to stay ready to play and everyone is showing pretty good form at practice and these next two games are a mental test for us in staying locked in. But I think we have the characters to stay locked in and get the job done.”

Newley is still chasing his first championship win after a long career in Australia and Europe and he said the team knows it can’t afford to lose focus as it chases a second consecutive title.

“It’s what I came to United for,” Newley said.

“I’m just doing my bit and what I can do to help the team win is what I’m about. I’m gunning for that championship.”

The South East Melbourne Phoenix keep chasing wins to finish their season and they could play spoiler if they can beat Tasmania JackJumpers at John Cain Arena on Sunday.

The JackJumpers could still finish fourth if they win their remaining three games and Perth lose their last four games as the Wildcats lost to Adelaide in Perth on Thursday night.

Phoenix coach Simon Mitchell didn’t rule out forward Ryan Broekhoff as he continues training after a shoulder injury while guard Cam Gliddon was set to play on Sunday after missing the last game due to a bout of gastro.