Being “one of ours, made good in the big city” is one thing of course.

But how about being “one of ours made good in an entire continent? How about forging a path where none have gone before, and taking skills learnt on a suburban Sydney basketball court to not only change her life but the lives of others? How about making an entire nation rejoice, while providing inspiration in a gender-agenda that has seen shards of glass ceiling scattered from Cairo to Cape Town; Nairobi to Niger? 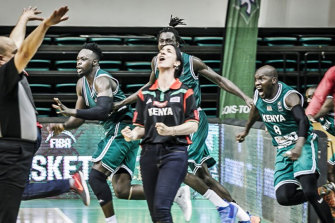 Who? I thought you’d never ask.

Fifteen-odd years ago, Liz Mills – then a student at Willoughby Girls High – was one of many young women around the courts at Northern Suburbs Basketball Association at Crows Nest. She loved the game, but her passion was not three-pointers, inside play, or jump-shots. Instead she quickly discovered her true passion was coaching.

Starting with the juniors, and working her way forward from there, she formed the view that the most important thing was neither fitness nor skills – though both were fundamental – it was the players caring about each other, and her, feeling part of a team and working hard together.

Fast forward to the key qualifying match for the AfroBasket championships in Cameroon last month, as Kenya are about to take on the mighty Angola. The crowd is roaring, and the match is about to start. Everyone knows Kenya can’t win, of course, as beyond everything else, they haven’t been good enough to make the AfroBasket championships for 28 years, let alone beat Angola, who have won it a record 11 times. And Kenya have never beaten them. Mills is on the court with the Kenyan side after the warm-ups, and is making her way to the sideline when a particularly officious official waves her away from the chair she is about to sit on.

“No, this is for the head coach,” the official tells her.

“I am the head coach,” Mills replies evenly.

RAH! Though she doesn’t know it, she is right now in her last 90 minutes of relative anonymity in booming African basketball. But those words – “I am the head coach” – is a time to reflect on how she got to that moment.

Broadly, it started in 2011 while visiting Zambia with her twin sister, Vic. Attending a game of the local men’s competition she noted a few things she thought she might be able to help with, and approached the club offering her services.

They looked her up. They looked her down. A 24-year-old white girl from Australia, who’d never coached men let alone African men, thinking she could help their side? Bemused, perhaps for the sport of it, they gave her an hour.

She put them through drills they’d never done before. She talked to them about the importance of playing for each other, of working hard, of concentrating on the hard grit of defence as much as the glory of offence – and if they did that, the scoreboard would take care of itself.

They liked her. They won the next game. They asked her to keep coaching, and they went on to win the Zambian basketball championship!

Though bringing Australian expertise, she also used an African concept that fitted perfectly with her philosophy.

“I love the African notion of ‘ubuntu’,” she says. “It means, ‘I am because we are’ – I can only be all I can be, if you are all you can be. It’s a very team-focused mentality.”

Continuing to coach in Lusaka, she rose to the position of assistant coach of the Zambian national team, which led to the job as assistant coach with Cameroon and a club team in Rwanda. As a woman operating in a previously exclusively male world, a few things had to be worked out.

One thing she decided to make clear from the start was, “yes I am a woman and proud of it, so deal with it”. One way of doing that was by eschewing the usual coach footwear of sneakers, and instead wearing high-heeled leather boots, the kind only women wear.

“I think it was a way of looking more professional,” she told the Washington Post last week, “but also reminding everybody that I’m a woman and I’m not afraid of that and I want you to know that. I wanted to walk in and be like, ‘this is me, here I am’.”

It took the Africans time to get used to her, and she was constantly mistaken for the water girl, asked to move along by officials and even opposing players. Her own players had to get used to how to address her – either Liz or “Coach Liz”. Any players who called her “ma’am” had to do push-ups as punishment.

Do not mess with the woman in the high leather boots!

In terms of the logistics of a woman being around a male dressing room, it was never an issue. She would never enter the dressing room without knocking, and would address her players immediately after each match. She would then go to the press conference and they would hit the showers.

Such was her success, last year she achieved the dream: being appointed as national coach of the Kenyan men’s team. She worked them hard, bringing her philosophies to bear, the ones she had developed with juniors at Crows Nest.

“As a coach, I wanted to know as much about their lives off the court as on the court.”

Against Angola, her players play as never before. Angola are rattled. Still, they really do have the measure of these uppity Kenyans and go to a 15-point lead in the second quarter. Bugger.

But wait! The Kenyans are rallying! They are playing for each other! Coach Liz talks to them at half-time about keeping their faith in each other and locking them down in defence. They claw their way back to trail Angola by just three points at the end of the third quarter. With 24 seconds to go, Angola are up by a point 73-72.

Coach Liz gives the orders. “Boys, go at ’em from the jump. No use to try for fancy riding now. Get the ball into the hands of our best player, Tylor.”

Sure enough, Tylor Ongwae gets it with two seconds to go.

It’s a turnaround jump-shot, everybody jump-starts, every generation throws a hero up the pop-charts.

The balls arcs up and starts to descend, as the entire stadium watches mesmerised. It drops!

Kenya itself explodes the way Australia did when we won the America’s Cup. Amazing scenes – dancing in the streets, horns bipping, lights being turned on and off in celebration.

Kenya are going to AfroBasket for the first time in 28 years and will travel to Kigali, Rwanda in August to compete.

Good on you, Coach Liz.

We are very proud.

Tags: at, Aussie, coach, Heart, THE
You may also like
Latest Posts