Anthony Joshua’s promoter Eddie Hearn has confirmed that talks for an undisputed world heavyweight title fight between AJ and Tyson Fury are already underway. Both fighters hold all the belts in the division and could clash later this year.

Fury won his highly-anticipated rematch with  Deontay Wilder last weekend, knocking him out in the seventh round to pick up the WBC and Ring Magazine world title belts.

Joshua also won his huge rematch with Andy Ruiz Jr back in December, reclaiming the WBA, WBO and IBF belts he lost to the Mexican last summer.

And now both Fury and Joshua look to be on a collision course to face each other for all five world titles later this year.

In the meantime, however, Fury could rematch Wilder again while Joshua as IBF mandatory challenger Kubrat Pulev to fight. 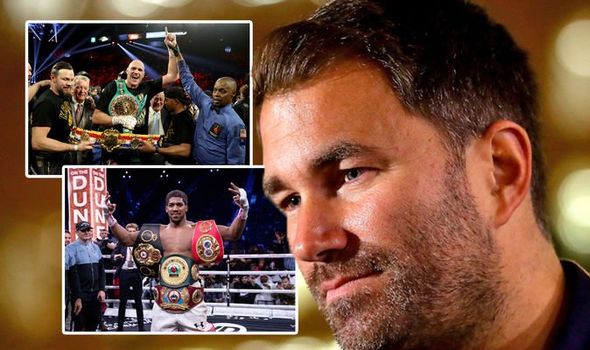 But Hearn has confirmed talks are already underway to make sure Fury vs Joshua happens as soon as possible.

“We’ve got two Brits who can unify and become the undisputed champion of the world, we must take that chance and we will take it,” he told BBC Sport.

“Three months ago [Wilder and Andy Ruiz’s promoter] Al Haymon and the Americans had the heavyweight division on lockdown, now we control it all,” Hearn added.

“Everyone is combined to try and make it happen and talks are already under way.

“Because me, AJ, Tyson Fury, [Fury’s co-promoter] Bob Arum, all these people, they want that fight to happen.”

Fans are desperate for the fight to take place in the UK, either at Wembley Stadium in London or Old Trafford in Manchester.

But Hearn revealed earlier this year that Saudi officials have already approached him with a vision to host Fury vs Joshua in their country.

Las Vegas’ brand-new 70,000-seater Allegiant Stadium could also host the event – but Hearn says the fight will likely go to whoever puts up the most money, though he hasn’t ruled out the UK. 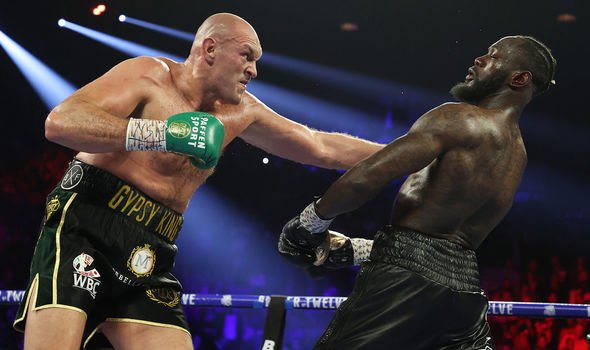 “Everyone says, ‘tell the guys not to worry about the money, just do it in England’, but it doesn’t work like that, unfortunately,” he added.

“Everyone wants to do it in England, I want it in the UK, AJ wants it in the UK, Fury will, but these guys have teams who will say ‘can you tell us all the offers.’

“If one offer is five times the other, then that is where they are going.

“But our job is to make sure the money is in the UK, whether we have to beg for it, go to the government for it, whatever we have to do to make that fight in the UK.

If we can do it in the UK, it is something that will never, ever be forgotten. But we could be talking it being worth an extra £40, £50, £60 million each having it elsewhere.

“And we can’t forget this is prize fighting. Whilst everyone wants the fight in England, remember you can get hurt in this sport, we have seen fighters lose their lives recently in this sport.

“We can’t take these fighters for granted and we will try and deliver everything we can for them. But if we can make it in Britain, I’ll even become popular, so that will be the aim.”

Hearn also promised that his frosty relationship with rival Brit promoter Frank Warren would not get in the way of making the biggest fight in British boxing history. 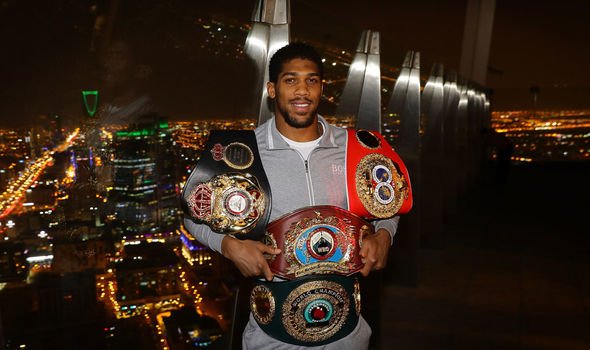 “We can’t let the politics get in the way. I’m happy to sit down with Frank,” Hearn explained.

“When there is an opportunity like this, I will never let ego get in the way, I won’t say I won’t deal with Frank.

“It’s not my style. If we can deliver for the broadcasters and the fans, let’s make it happen.”

Tags: Anthony Joshua, autoplay_video
You may also like
Latest Posts