Anthony Joshua was ‘left out to dry’ by his team after split decision loss to Oleksandr Usyk, claims sparring partner Frazer Clarke… and insists he would have ‘taken a dig’ to take away microphone in Brit’s ‘out of character’ post-fight rant

Frazer Clarke claims Anthony Joshua was abandoned by his team after seizing the microphone and going on a long-winded rant after his loss to Oleksandr Usyk at the Jeddah Super Dome, Saudi Arabia on Saturday.

Joshua’s sparring partner believes he was ‘left out to dry’ by the people around him, before saying that he would have done whatever he could to get the microphone out of the two-time heavyweight world champion’s hand.

The 32-year-old British fighter went on an explicit tirade covering several topics from his weight, his first forays into the sport and the situation in his opponent’s homeland of Ukraine, as he appeared to struggle with the emotions of a second successive defeat. 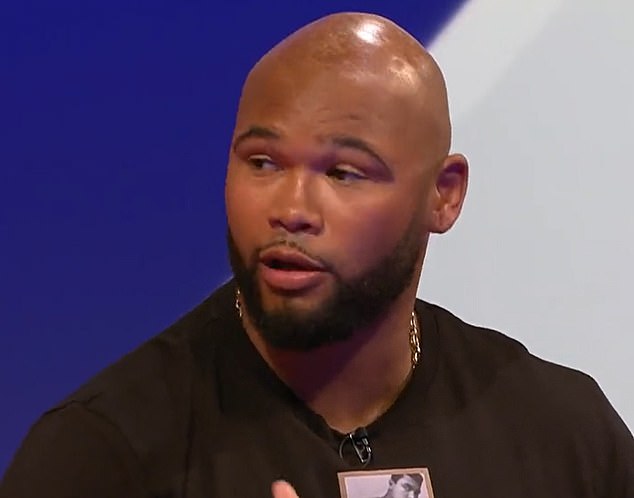 Clarke told SkySports viewers: ‘I’d like to apologise on AJ’s behalf. He might not like me for this and his team might not either but they left him out to dry there. That was so out of character but the people around him, where were they?

‘He’s had a bad one there and if I was there, I would’ve took a dig just to take the mic off of him just to give him a minute to compose himself.

‘It’s words but in the true reflection of boxing, that was Oleksandr Usyk’s time to celebrate that victory and he didn’t get to do it straight away. 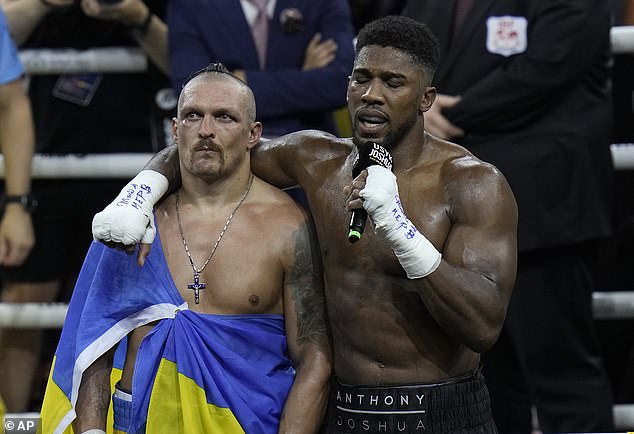 ‘I just don’t think that was right but once again, Anthony is a great person, he does a lot for a lot of people, he’s done a lot for me, but I feel like he had a bit of a bad one there and it was out of character.’

The Brit was looking to win back the WBA, IBF, WBO, IBO belts that he lost to the Ukrainian back in September 2021, but was stymied in his attempt by his opponent’s superior ring-craft and guile that earned him the nickname ‘the Cat’ in the past.

Joshua had put together a much improved performance on the back of a poor showing in September, and landed several body blows as he looked to be finding a way through the Usyk defence. 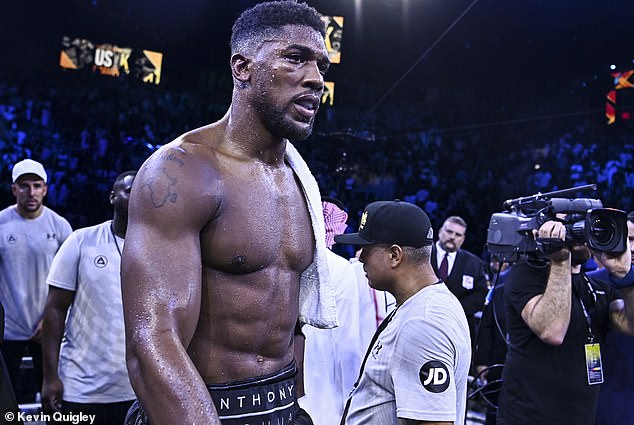 But he seemed not to capitalise when he had Usyk where he wanted him, and an extraordinary show of resilience in the final three rounds put the 35-year-old clear of his competitor before the confirmation of what many were anticipating as his victory. 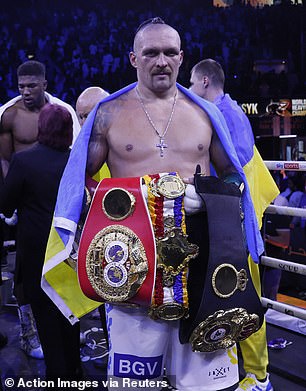 After denying Usyk his right to celebrate the victory after the announcement of a split decision verdict in his favour, Joshua told the arena and viewers alike: ‘Usyk is one hell of a f***ing fighter, let’s give him a round of applause.

‘Sorry guys, look, if you knew my story you’d understand the passion. I ain’t no f***ing amateur boxer from five-years-old, I wasn’t an elite prospect from youth, bro, I was going to jail.

‘I seen some youths in Reading jail, I got bail and I started training my a*** off. Because if I got sentenced I wouldn’t be able to fight. I bust my case, my cousin, where’s he at? G14. I’m stealing this Usyk, I’m sorry but it’s because of the f***ing passion we’ve put into this s***, man.

‘I’m not a 12 round fighter? Look at me, I’m a new breed of heavyweight, all them heavyweights; Mike Tyson, Sonny Liston, Jack Dempsey – they say ‘he doesn’t throw combinations like Rocky Marciano,’ because I’m not f***ing 14-stone, that’s why, I’m 18-stone I’m heavy.’

Anthony Joshua was ‘left out to dry’ after split decision loss to Oleksandr Usyk, claims sparring partner Frazer Clarke… and insists he would have ‘taken a dig’ to take away microphone in Brit’s ‘out of character’ post-fight rant