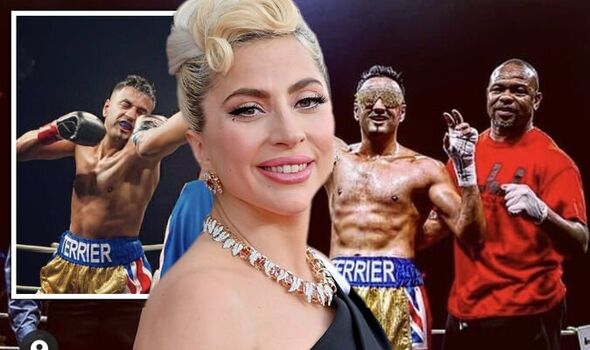 Fes Batista is talking about Roy Jones Jr and snakes and Lady Gaga and Floyd Mayweather and a particularly blingy pair of glasses. He is laughing in one moment and then having to fight back the tears in the next.

Over the course of an hour, our conversation dips, descends and seesaws between the heartfelt and heartbreaking. The polarity of it all feels significant and is not lost on Batista. “My life and boxing career has been like a roller-coaster, full of ups and downs,” he tells Express Sport. In the seven years since he turned over as a professional fighter, Batista has had just two fights. On Saturday he will have his third after years of inactivity due to injury and a health scare that had convinced him his fighting days were as good as over.

Extreme highs have given way for extreme lows but there is a reason the setbacks have been met with the stubbornness of a mule. “I want to prove to my tormentors that I can be a success,” he says before his voice quavers. Before pursuing a career in the ring, Batista was subjected to abhorrent racial abuse at university that took such a toll he contemplated suicide. Had the right song not played at the right time, he wouldn’t be here today talking about his ambitions for the future.

“I was scared to look at anyone’s face in fear of what they might say to me. I was intimidated to walk around campus. It was the worst time of my life by far,” he says. “I remember this one particular night and I’ll never forget it. I remember this girl came up to me and pointed at me and said: “You f***ing terrorist” straight to my face. My stomach just sunk. People wouldn’t sit next to me in the lecture theatres, group work was always hard because no one wanted to be around me. It reached a boiling point when on another night someone threw a drink all over me for no reason. I felt like I was a disease.”

Batista had been pushed to the brink and couldn’t cope anymore. “I walked home and said to myself this is it. I sat on the edge of my bed with a knife in my hand and there was a wardrobe with a mirror on it in front of me. I looked at myself and said let’s have a quick highlights reel in my head and remember all the good times because there are no more highlights after today.

“And it froze me, and I played the song again and I was crying and I normally don’t relate to music so quickly, but for the first time ever I heard lyrics to the song, ‘Marry the night’ and I understood what that meant. Marry the night, marry what’s dark about your life, your traumas, your problems.”

After being saved by – in his own words – a ‘wonderful nutjob,’ Batista quit university on the spot and began plotting how he could make it big in boxing. As a teenager, he had shown promise but he was raw and had no real amateur pedigree. Inspired by Amir Khan’s success, Batista took up the sport in his late teens and actually became close with the world champion after an ex-girlfriend introduced him.

On one occasion, he even visited Khan’s house and received a pep talk that has stuck with him to this day. “Amir’s a cool guy. Everyone thinks he’d act like a superstar because of what he’s done but really he’s very down to earth and just hangs around with everyday people like he’s just one of us,” he says. His close connection with Khan extended to Las Vegas when Batista made the trip across the pond to watch the Brit unify his super-lightweight world titles against Zab Judah in 2011.

Days before flying out, Batista had bombarded Jeff Mayweather – Floyd’s uncle – with messages and arranged to train at the famous boxing club after much persuasion. “We went on the pads together and the first thing he said to me was: ‘You hit like a bull, you hit like a tank’. He said he could see my potential and took me on and helped me get loads of sponsorships. I moved out to Vegas and the deals Jeff helped me get sustained my life out there.”

So, did you ever cross paths with Floyd? “Many times. I remember one time he said: ‘What’s up with these glasses?’ And I was like: ‘It’s my favourite thing my bling glasses.’ And he said: ‘The only person who is allowed to wear that much bling is Michael Jackson and he’s dead.’ He was at the peak of his career at the time, so it was an honour to be around him.”

After spending nearly a year at Mayweather’s gym, Batista swapped Sin City for a Pensacola farm to team up with Roy Jones Jr. “The surroundings are quite different,” he laughs. “Roy’s gym is on his farm and it’s crazy. It’s a 90-acre property and he’s got like 400 chickens, peacocks, dogs and there’s snakes as well. You’ve got to be careful because it’s in the middle of nowhere and the nearest hospital is over an hour away. I got told if you get bitten by a snake, make sure to take him with you so the hospital knows what anti-venom to give you. I’m not sure a snake would listen and willingly come in the taxi with me but thankfully I’ve avoided such scenarios.

“There’s a particular kind called a Water Moccasin they talk about at the gym. I’ve not seen it but apparently, this particular psychopath just chases you, it just chases you for no other reason than to inject venom into you. Roy’s lived there all his life and had loads of encounters but he told me he’s never been bitten. You should see his hands though, they’re like shovels, I’m pretty sure he could just grab them and throw them away.”

Batista first met Jones – who, with dizzying speed and reflexes, won world titles from middleweight to heavyweight – on the off chance when a friend of his took him along for an interview. “I was star struck when I first saw him but after a while of trying to build up my courage, I finally spoke to him and told him who I was and what I wanted to do in boxing. He got me to come down to his gym and after three rounds of sparring, gave me a contract to sign.”

And the rest as they say is history. But very little has been etched into the book since he dazzled on his debut in front of 10,000 fans in Pensacola – and on Lady Gaga’s birthday of all days. A broken foot in the months after put him out of action for some time, and while Batista returned home to continue ticking over, he slipped into a dark spiral. “I went from a massive high to a big low, cooped up in bed not able to walk just months after having 10,000 fans cheer my name. I couldn’t really deal with it and went off the rails a bit with my diet. I kind of dropped boxing for a little bit.”

It wouldn’t be until almost three years later that he’d fight again. But then a health scare put his life and career on hold once more. The details he’d prefer to remain private but the gravity of it was made abundantly clear. “Put it this way, I thought I’d never box again. It was devastating,” he says. But after seeking medical advice from doctors and specialists up and down the country, Batista has now been given the all-clear to step back through the ropes and pick up where he left off.

“I have to say a huge thank you to Roy Jones for sticking with me through this, he’s been so patient with me,” he says. “I’ve been training with my camp back in England for months and now I’m going to fly out to join Roy ahead of Saturday and stay out there for a while. I’ve got four or five fights lined up. He wants to build me up around Alabama and quickly. He has a huge network and I’ve seen what he can do. I’ve seen my team-mates fight in Madison Square Garden and the guys I train with fight on Lomachenko’s undercard. So the road ahead is magical.”

Batista is 32 now and hopes it will be third time lucky because he still can’t escape reminders of those days past. Not until his hand is raised can those ghosts be buried for good.

“I have just about enough time to give it a good run in this boxing game. I have had my down times but I kept pushing and pushing because I want to prove to my bullies that I am a champion. I don’t know what kind of champion I’m going to be. It could be a United States champion, a Florida state champion, or a WBC, I don’t know what it is but I know I’m going to be a champion. I’m looking forward to getting that dark cloud off my back. I’ve got this dark cloud that I think about every single day. One day it will go away but only when I’m a winner and when I’m a champion.”