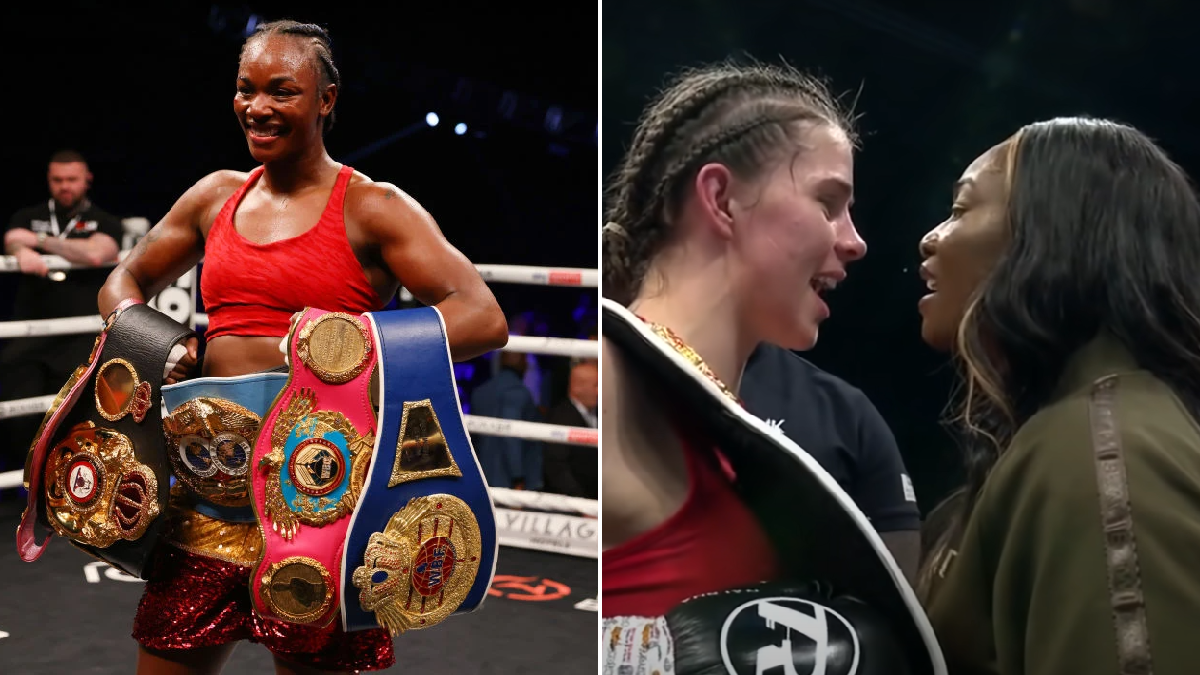 Claressa Shields is hoping a ‘terrified’ Savannah Marshall does not back out of their huge unification fight this summer – warning she is coming to the UK to give her old rival nowhere to run.

A defeat to Marshall in a 2012 amateur contest is the only blemish on Shields’ impeccable boxing record and the source of an intense rivalry the two have shared over the last 10 years.

The Michigan fighter, who currently holds the WBC, WBA and IBF middleweight titles, is one of the most decorated active fighters in boxing, becoming the quickest man or woman in history to win world championships in three different weight classes while ruling as undisputed queen in two of them.

A deal to fight WBO middleweight champion Marshall in July is thought to be close. That bout will serve as another historic moment for women’s boxing, following on from Katie Taylor’s titanic clash with Amanda Serrano at Madison Square Garden on Saturday.

‘I am already fully prepared to win this fight and to go to the UK to fight her,’ Shields told Metro.co.uk.

‘I have been telling people for years, she is terrified of me. No matter how many girls she has knocked out or what her record may show, she knows I am a different kind of animal and she is not able to knock me out or walk all over me. It is going to be the toughest fight of her life.

‘That win [Marshall beating Shields in the amateurs] when I was 17 is where her confidence comes from. I have already proven that I am better than her, with my two Olympic gold medals, my world championships, my world titles in three divisions.

‘I am hoping it is going to be this summer because I have other things I want to do before the end the year.’

Shields is looking to recreate her remarkable boxing achievements in the world of MMA, having signed a contract with the Professional Fighters League in December 2020. The 27-year-old has fought twice under the PFL banner so far with the promotion hoping she will commit to their regular season format where she can launch a title bid in 2023.

Shields has a 1-1 record in MMA having suffered a split decision defeat against Abigail Montes last October and is expected to return to the cage later this year after the Marshall fight with an agreement close.

‘We are finalising details with Boxxer this week and hope to make an announcement over the next few weeks,’ Shields’ manager Mark Taffet said. ‘The fight must take place by July because of Claressa’s contractual commitments to PFL for the fall. Claressa simply does not believe Savannah wants the fight but we are hoping otherwise.’

Shields has huge plans in both her professional and personal life over the coming years and insists she cannot put her career on hold for anybody – including Marshall.

‘I don’t have time to be waiting around for Savannah Marshall to show up,’ she said. ‘I have got business to attend to in MMA in 2023 and then I am getting married in 2024. So I don’t really have time to wait for ‘Marshmallow’ to get her s**t together.

‘I am never going put my own career on hold for Savannah Marshall or for anybody.’

While there is a deadline of sorts, Shields is adamant she will silence Marshall this year. There were fireworks as the two came face-to-face following Marshall’s KO win over Femke Hermans in April with the two sharing the same ring again for the first time since that amateur fight a decade ago.

With Hartlepool-born Marshall roared on by the Newcastle crowd that night, Shields was given a taste of the sort of reception she will receive on UK soil.

But the double Olympic champion is ready to play the villain and expose her old rival on the biggest stage.

‘They are terrified that I will shake up her up mentally and mess up her fight. Every time I get face-to-face with her all I sense is sarcasm and fear. I am serious business and she now knows she has signed a cheque that she can’t cash. She knows she is in trouble.

‘I was over there arguing with that Newcastle crowd, ‘you may not like me but you will respect me’ and I’m going to make her bow down in front of all of them.

‘She has always tucked her tail between her legs when it’s time to fight the real fight. That is why she has got no Olympic gold medal.’