Conor Benn could be ready for a British battle against Amir Khan after his blistering stoppage victory over Samuel Vargas, says promoter Eddie Hearn.

The unbeaten 24-year-old welterweight needed just one minute and 22 seconds to overpower Vargas and then called for a domestic clash with Khan.

“Give me a proper test,” Benn told Sky Sports. “Give me Amir Khan. I know he’s too busy on reality shows and all that. But listen, if he wants it, he can get it.

“Eddie, you’ve got the phone.”

Matchroom boss Hearn admitted Benn would be taking another sizeable step up in class against a former two-weight world champion.

“This was a test,” Hearn told Sky Sports. “Vargas was in tremendous shape. He just couldn’t handle the speed.

“The ref jumped in, he was about to get brutally knocked out. The hand speed, the power. Question marks are always, can he handle the step up?

“You have to be ready to take a big jump. Amir Khan is a big jump. It’s an absolutely huge fight.”

Benn swiftly responded: “Is it a jump though? You don’t think I land that right hand, he’s going to go down?”

Khan has recently declared he wants to resurrect talks for an elusive showdown with Kell Brook, but Hearn has questioned whether he could be lured by a lucrative clash with Benn. 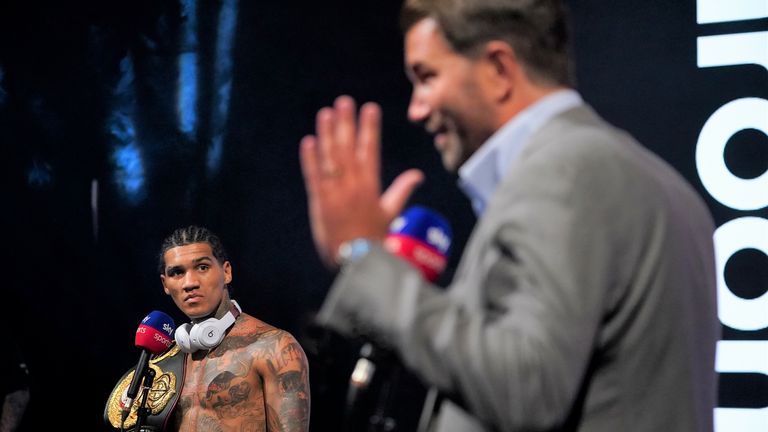 He said: “The issue is that when you beat someone like Vargas, like that, the next fight, it’s a top-15 ranked fighter in the world, and that’s what Amir Khan is, so why not fight a domestic fight like Amir Khan?

“Conor Benn against Amir Khan is probably one of the easiest fights to sell, I’ll ever take part in.

“What an intriguing fight. A young kid coming up, as you can tell, is rather amped and charged against a guy that is really at the end of his career and has a fantastic legacy in the sport.

“Whether Amir Khan will say, ‘I want to bow out to a young man coming through the ranks like Conor Benn.’

“That’s up to him and money will talk in that respect. For me, I want to get him back out as soon as possible.”

Tags: be, Benn, Conor, could, for, ready
You may also like
Latest Posts