Conor McGregor’s next fight could take place the week before Tyson Fury’s trilogy fight with Deontay Wilder, it has been claimed. The former UFC featherweight and lightweight champion is said to be in talks with the UFC brass over the second outing of his 2020 ‘season’.

According to ESPN, the Irishman’s representatives are said to be in preliminary talks over a summer showdown with in-form lightweight contender Justin Gaethje, though that notion has been dismissed by the latter’s manager.

Given the current UFC calendar and McGregor’s eagerness to get back to work as soon as possible, a July return to the Octagon is more than likely.

And ESPN’s Ariel Hewlani, who reported the news of McGregor vs Gaethje being in the works, has claimed ’The Notorious’ could be back in the cage a mere seven days before Fury’s rubber match with Wilder, which is expected to take place at the MGM Grand Garden Arena in Las Vegas on July 18.

He tweeted: “Imagine McGregor and Fury fighting in Vegas a week apart? Could very well happen and it would obviously be massive.” 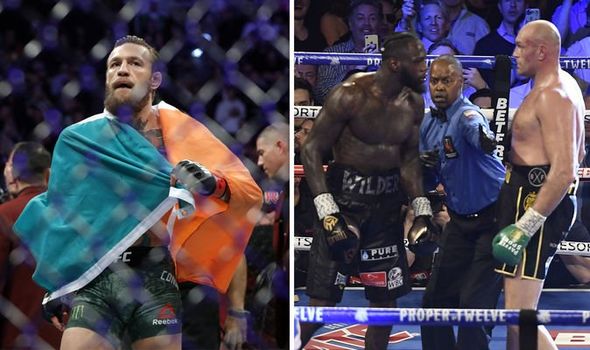 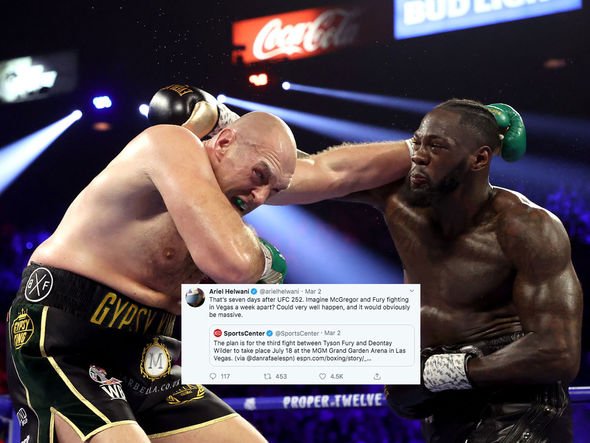 Imagine McGregor and Fury fighting in Vegas a week apart? Could very well happen and it would obviously be massive

The UFC are expected to host their yearly International Fight week card on July 11, though it has yet to be announced.

The card is expected to be UFC 252, an event which the eagerly-anticipated welterweight title fight between champion Kamaru Usman and Jorge Masvidal is in the works to land on.

McGregor, 31, made his long-awaited return to the Octagon in January in the main event of UFC 246, where he decimated Donald Cerrone in 40 seconds to pick up his first win in over three years.

The UFC’s first simultaneous two-weight world champion is hoping to fight two more times this year and is staying ready incase either Khabib Nurmagomedov or Tony Ferguson fall out of their lightweight title fight, which headlines UFC 249 on April 18.

Gaethje, who has won his last three in a row, is also planning to stay ready in case of a late withdrawal and is hellbent on facing the winner of the eagerly-anticipated 155lb bout.

The former World Series of Fighting lightweight champion is also open to facing McGregor next, though he doesn’t believe the Dubliner is as keen on the fight as he is.

“The man is not going to fight me,” Gaethje said in a video alongside UFC bantamweight champion Henry Cejudo. “What the fuck do you gotta do?

“He’s running out of easy fights. I’m sitting here, smoking my CBD, waiting for a motherf**ker to punch me in the face.” 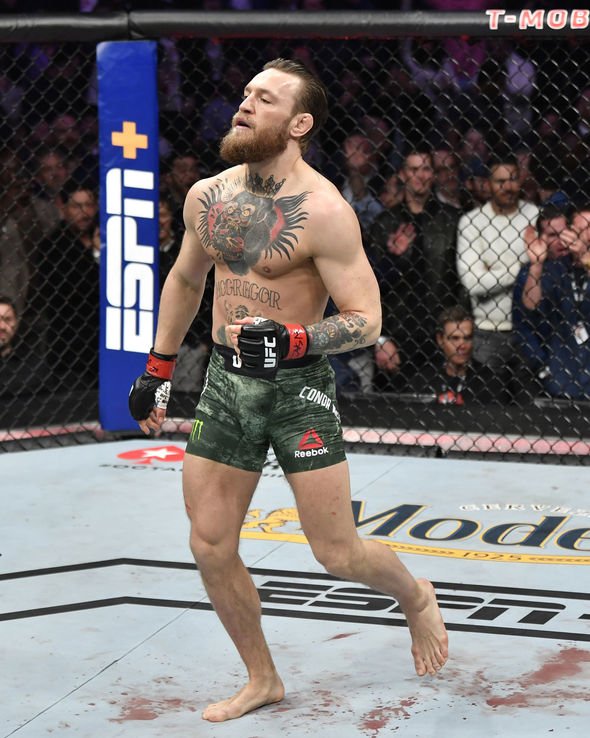 “I mean laugh at how Justin is behaving. He’s a funny guy. He’s been taking it very to heart, you know? And I know the feeling when you do that.

“So maybe I’ll get through Donald and I’ll have a quick turnaround against Justin. So maybe that’s what will happen. But Justin is on the list, no doubt.”