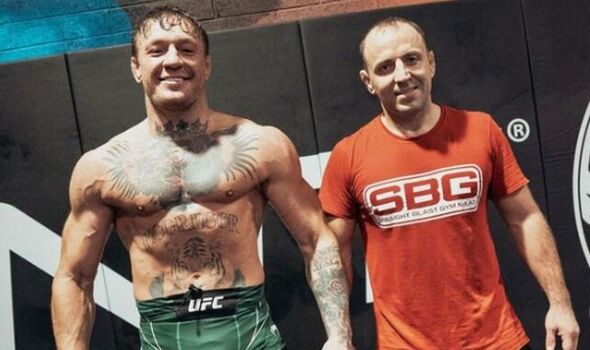 Conor McGregor has hinted at a move to welterweight ahead of his return to the UFC Octagon next year. Posting to Instagram, ‘Notorious’ uploaded three photos of himself – one as a featherweight in 2015, another at lightweight in 2021, and third of his current physique in 2022 with “170?” captioned above it.

McGregor has been out of action since breaking his ankle in his trilogy bout with Dustin Poirier at UFC 264 on July 10, 2021. During his time out of competition, the Irishman has bulked up considerably, leading many to speculate that he will fight at 170lb when he next competes for the MMA giants.

McGregor has fought at welterweight three times as a professional – twice against Nate Diaz in 2016 and then again versus Donald Cerrone four years later. Speaking in March about the weight he hopes to return at, McGregor told MacLife: “It’s about finding out which weight now. I just don’t really see myself coming back to 155 (lbs) again. I’m eating, I’m lifting, I’m training and I’m not cutting calories, so this is my natural state. I can go even bigger.”

He added: “I don’t want to go too much over 170. I’ve always had a great time when I had a full camp at 170 with correct preparation.”

Exactly when McGregor will fight again is presently unclear. On an Instagram Live, the Dubliner said: “I’m going to be back soon, hopefully. Early 2023 I’m aiming for. Sometime in that first quarter.”

However, McGregor has been out of the USADA drugs testing programme since the third quarter of 2021 and won’t be able to fight again until he is given the all-clear by the UFC’s official anti-doping partner. According to USADA’s rules and regulations, fighters must be subject to six months of random drugs testing before being granted permission to compete.

This means that McGregor will likely be out until the middle of 2023 with no official confirmation that the former two-weight UFC champion has re-enrolled in the pool. There is, however, a loophole that the UFC may look to explore in order to get their cash cow back under the bright lights as soon as possible.

The UFC can grant an exemption to the six-month rule in ‘exceptional circumstances’ or ‘where the strict application of that rule would be manifestly unfair to the athlete’. The athlete would only have to return two negative tests before being cleared to compete if this exemption is applied.