Deontay Wilder vs Tyson Fury II, LIVE: What time is the ring walk and how to watch the rematch in Las Vegas?

Not long now until Deontay Wilder defends his WBC heavyweight title for the second time against Tyson Fury as they both look to finally put to rest who the winner of the first fight was following a controversial draw 448 days ago.

Fury has vowed to knockout Wilder in the second round having dumped Ben Davison as his trainer for Javan ‘Sugarhill’ Steward, as the British heavyweight looks for more power whilst keeping his light footwork and speed.

The Bronze Bomber will be hunting for an early knockout that keeps the Gyspy King down after dropping Fury to the canvas in the 12th round in their first fight, only to miraculously beat the count following an Undertaker-like resurrection.

Both fighters have come into this Las Vegas fight at T-Mobile Arena heavier, with the Bronze Bomber weighing 16st 7lbs and Gypsy King 19st 7lbs.

What time will Wilder vs Fury start?

The ring walk for Deontay Wilder and Tyson Fury rematch is expected to take place about 5am on Sunday UK time – which is 9pm in Las Vegas on Saturday.

The undercard for this fight takes place from around 10pm UK time on Saturday – which is 2pm local time.

How can I watch the rematch?

The fight will be available on ESPN+. Existing customers can purchase the fight for $79.99 with new customers able to get a bundle package for $84.98 which includes one match access to the streaming service and to Wilder-Fury fight.

You can also watch on FOX Sports PPV and can be stream by the FOX Sports App or any streaming device as the above.

Sportsmail’s Ollie Lewis will provide live commentary and build-up of Wilder-Fury rematch from 7pm US (PT)/3am UK time with round by round boxing updates from Las Vegas.

From dipping knuckles in petrol to training with Conor McGregor

Tyson Fury has being making all the headlines ahead his rematch with Deontay Wilder from claims of his method for keeping his testosterone levels high, using petrol to toughen up his knuckles to training with UFC sensation Conor McGregor.

What have both fighters been up to for the last 448 days?

Check out what both fighters have been up to including Gyspy King’s WWE debut whilst Wilder delivered two more devastating KOs.

Good day to all followers!

448 days have gone by since they last fought as both heavyweights look to finally settle who won the first fight, following a controversial split decision draw on December 2018.

The current favourite to win the bout in Las Vegas is Deontay Wilder who is EVENS to win whilst Tyson Fury is 21/20 on Betfair. 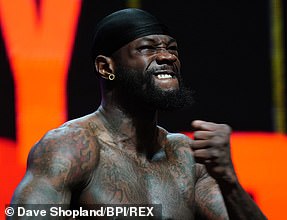 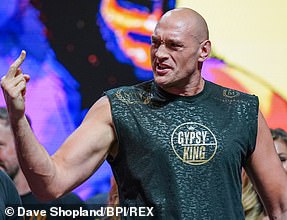 Tags: Deontay, Fury, L, Tyson, vs, Wilder
You may also like
Latest Posts