Conor Benn was left laughing after Chris Eubank Jr suggested that the ‘Eubank name is in front of Benn in the history books’. The pair exchanged words during a recent Good Morning Britain appearance as the verbal jabs continued ahead of next months’ grudge fight.

When Eubank Jr and Benn square off on October 8 at the O2 Arena there will be more than just bragging rights on the line. Both men will be defending their family names and their father’s legacies.

Nigel Benn and Chris Eubank Sr shared one of the fiercest rivalries in British boxing history during the 1990s. When they first met in November 1990 there wasn’t a single empty seat in the NEC as Eubank overcame early adversity to stop Benn in the ninth round.

Three years later, when they rematched at Old Trafford, half a billion people tuned into the grudge match worldwide. On the night, it was declared a split draw, a result which is still heavily contested by both parties to this day. 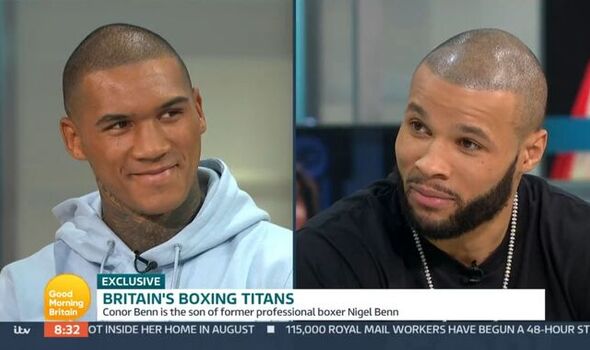 Despite a £6 million trilogy bout at Wembley stadium being touted for 1995, a third fight never took place. Now, one day short of the 29th anniversary of the second fight, Benn and Eubank Jr settle the score once and for all.

Much like their father’s rivalry, Eubank Jr has taken on the role of the instigator as he goads Benn into biting back with sarcastic remarks. Throughout camp, he has uploaded several videos of him indulging in fast-food binges and claims that he only needs to be at 60 per cent to beat his adversary on fight night.

During their GMB special, the mind games continued as Eubank Jr boasted: “Yeah, important fight, and there’s a lot of pressure on me to not only win but to uphold the name, the family legacy that we have created.”

“Right now, the Eubank name is in front of the Benn name in the history books and I’m going to keep it that way,” he continued as Benn sniggered.

“You’re funny you are,” replied Benn. “The fight wouldn’t have happened if it wasn’t Eubank-Benn or you were ring walking second, but the reality is my ego ain’t that big about my name being first in the history books or whoever ring walks second, I couldn’t care less to be honest with you mate.”

Eubank Jr fired back: “But you do agree that we are ahead of you in the history books, well we beat you.”

Before Benn concluded: “No, not at all, everyone knows this fight as Benn-Eubank, you know when this fight was done and announced, do you know whose name was trending? It weren’t Eubank mate, let’s have that right.”