Some fans Stateside were unable to watch the opening bout of the card, between ex-NFL star Chad “Ochocinco” Johnson and bare-knuckle fighter Brian Maxwell, despite paying the $50 (£35) pay-per-view price for the whole card.

Johnson’s bout, while only an exhibition bout, was a matchup that garnered significant interest in the States, with the quirky former wide receiver making a one-off appearance in the boxing ring.

And with the bout unavailable to many fans tuning in, a number of disgruntled customers took to social media to voice their displeasure and demand refunds.

Showtime, who owned the U.S. broadcast rights, tweeted to disappointed fans, saying, “If you are having issues watching the fight on showtime.com or on the SHOWTIME app, please try again in 10 minutes. We are working to resolve the issue.”

The broadcaster’s help account on Twitter later tweeted: “If you purchased tonight’s PPV event through http://Showtime.com or the SHOWTIME app, and could not stream the fight, please go to http://showtime.com/help for information on requesting a refund.”

Fans in the U.K. were unaffected by the problems, with Sky Sports Box Office’s stream seemingly delivering a strong feed for the overwhelming majority of fans. 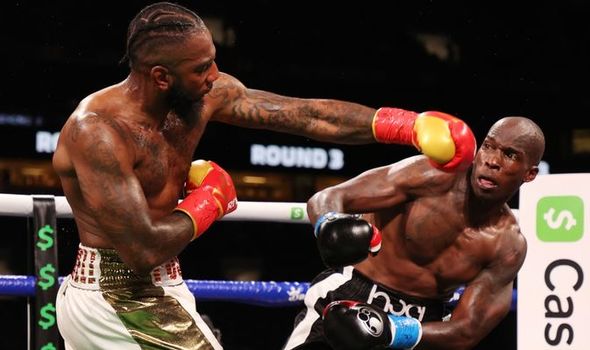 The bout between Johnson and Maxwell turned out to be an entertaining, if scrappy, one, as the pair battled all the way to the final bell.

Competing over four 2-minute rounds, Johnson used his southpaw jab to score repeatedly on the more compact, but more static, Maxwell across the first three rounds.

But in Round 4 Maxwell came out all guns blazing in an attempt to score a late stoppage.

And Johnson was in big trouble when Maxwell connected with a wild, looping right hook that sent Johnson crashing face-first into the mat.

Johnson bounced back up and survived the remainder of the round to take the fight the distance.

After the fight, a still-buzzing Johnson joked that “I think I’m ready for (Conor) McGregor.”

But the former NFL star, who was voted into the Pro Bowl six times during his career, had previously confirmed that his bout with Maxwell was a one-time deal.

“I’ve done some crazy things in life, and this is one to add and scratch off the bucket list,” he told SB Nation prior to fight night in Miami.

“I’m coming in there to have fun and entertain.”