Conor McGregor has tweeted his pleasure at seeing his whiskey business Proper 12’s logo slap bang in the middle of the ring which will hold Tyson Fury’s WBC world title fight with Deontay Wilder later on tonight.

Wilder and Fury will do battle for the former’s WBC strap, as well as the Ring Magazine title, at the MGM Grand Garden Arena in Las Vegas.

Both fighters fought to a split decision draw back in December 2018, but they’ll run it back tonight.

The logo in the middle of the ring is usually reserved for big beer brands such at Tecate and Corona. 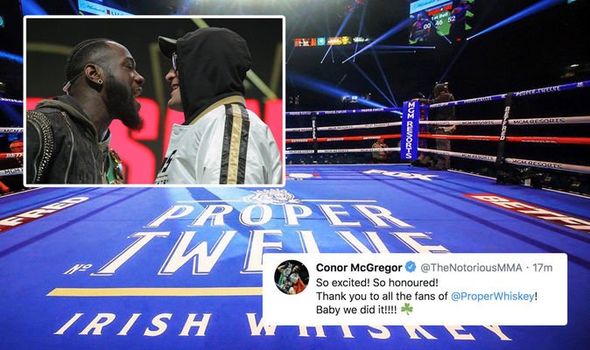 Sponsors have to pay an astonishing amount of money to have their logo on the ring mat, let alone to be the featured advertisement.

But this time around, it’s UFC star McGregor’s whiskey logo in the middle of the mat.

And the Irishman is absolutely buzzing about it.

He wrote on Twitter: “So excited! So honoured! Thank you to all the fans of @ProperWhiskey! Baby we did it!!!!”

McGrgeor has spoken of his admiration for Fury, who is looking to become a two-time heavyweight champion tonight.

But he also refuted claims that he’s ever spoken to Fury about potentially training the Gyspy King for an MMA fight.

“Tyson keeps saying we have spoken and that I have said that I would train him but I have never spoken to Tyson in my life,” he said.

“I don’t know why he is saying that but it is not a bad little story so I let it roll. 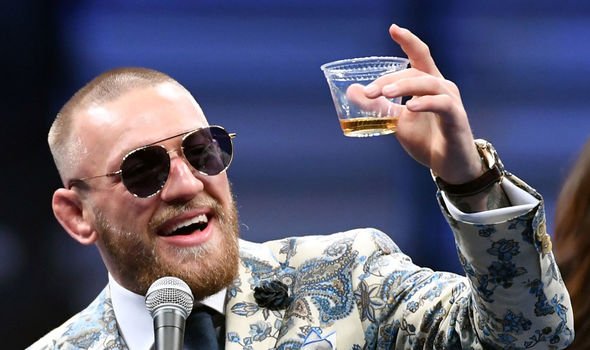 “I heard he is coming to my fight at the weekend and he is a good man and a phenomenal boxer.

“I would not say he is only saying he will cross over, he would probably do it in time. We might be able to set something up but I would not be holding up the pads for him to hit.”

Fury this week admitted that he would love to go out and drink with McGregor assuming he beats Wilder.

That came after McGregor said he was backing Fury to beat the Bronze Bomber.

“Thank you very much, Conor, I appreciate it,” he said.

“I’m going to get smashed out of my f***ing face after the fight here in Vegas.

Tags: autoplay_video, ctp_video, Fury
You may also like
Latest Posts