The problem with being a billionaire nightclub owner whose friends are A-listers? Somewhere along the way, you lose yourself. When the party ends, everybody goes home and you are left alone. In some ways, you were always alone.

Joe Fournier doesn’t want sympathy. “I created this monster,” he tells Sky Sports. But this friend to the rich and famous who became a professional boxer is more complex than you realise.

His return to the ring on Saturday night is against a musician and will feature a live Justin Bieber performance but he insists it isn’t all about glamour. Is that hard to believe? A little. Until you hear Fournier tell his story himself.

“I was slipping back into bad habits,” he says.

“Predominantly my businesses are bars, clubs and restaurants in all the fun places. It’s easy for my mates to visit me in Mykonos – one beer becomes two, becomes three…

“That leads to negative behaviour. I can get depressed and not myself.

“Boxing is good for my mental health. Tyson Fury is a big advocate of this. It keeps me from drinking too much, keeps me healthy and gives me a goal.” 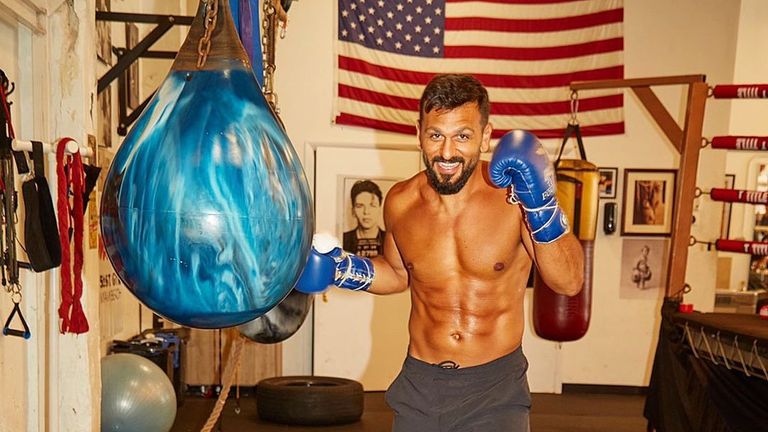 The scarcely believable rags to riches tale of Joe Fournier has been told before but, ahead of ending a four-year hiatus from the ring, this is the first time he has spoken so openly about why he is so deeply attracted to boxing.

He tells a story about training in the famous 5th Street Gym in Miami where a fleet of Lamborghinis and Ferraris sat outside: “But you don’t know whose car belongs to who, and everyone is getting punched. It’s an equaliser.”

Most of Fournier’s childhood, he says, was spent with a single mother who was on the dole. He captained England’s basketball team. He set up a celebrity personal training business which he sold to a FTSE 100 company, then went into the glitzy nightclub business.

Too much of the good life caught up with Fournier who ballooned in weight until, in 2015, he was encouraged into the ring by his friend David Haye. He won eight fights, all via stoppage, inside 14 months.

But there are black marks to his record which led to criticism. After a fight in Belgium he was banned for testing positive for a banned substance. Yet he still appeared in the WBA’s top 10 rankings, which raised eyebrows. Then he won the WBA international title (currently owned by Joshua Buatsi) in a fight that no longer appears on his official record.

Fournier explains the emptiness of the celebrity world: “Usher called me and said: ‘I’m singing a Prince tribute at the GRAMMYs, come out for your birthday’. I flew to LA, hung out with Alicia Keys and Cardi B, had a Rolls-Royce. Those moments are great.

“But this year in Dubai I threw a birthday party but was so lonely. Nobody really knew me. All my real mates were in England. I paid for 100 people to eat and drink but none of them cared about me. I felt alone.

“Everyone sees the fun part on Instagram but the other side is hard. My mum had cancer last year. I still had to work and I was on my own. Who wants to date a guy who is in a club six nights per week? Then I get up and train to fight. It’s a hard balance, it’s not all roses, but I wouldn’t change it.

“I am just a kid who drinks at the Bridge Inn in Hounslow. The glamorous stuff is just a persona that the young generation want to see on social media. They don’t want to see me calling my mum when she’s ill – they want to see me on a yacht in Mykonos or with a bottle of Cristal.

“The entertainment version of me is my job. The real me goes on holiday with my mates and has a pint at breakfast. People don’t know the real me because it’s not interesting! People want to see hanging out with Usher.

“I enjoy my real life more. I made my bed and I will lie in it.”

So this brings us back to boxing. Why is someone so rich attracted to the brutal game, and why return after so long away?

David Haye signed Fournier to his Hayemaker label in 2015 knowing the interest he would generate. They have also, it must be said, enjoyed many a party together. Haye tells Sky Sports about Fournier’s true in-ring ability: “He came to the game very late. People didn’t take him seriously – until they sparred him.

“I’ve seen him spar Chris Eubank Jr and James DeGale. He is very motivated and dedicated. He doesn’t need to do boxing but he has chosen the toughest route possible in life. You will be surprised how good he is as a boxer.”

The accusation levelled at Fournier is that he is a johnny-come-lately desperate to be the centre of attention, who has shirked the traditional route of aiming for British titles. But he only started in his 30s – “it takes too long and I’d be 45 before I achieved anything,” he says.

He has hardly fought on mainstream platforms either. One fight was on a Haye undercard but seven were in the Dominican Republic, away from scrutiny.

“My pro debut was in a jail against an unknown guy,” he says. “People say I fight cans but look at anyone’s career – you have to build. I was No 10 in the world after eight fights. How good am I? I don’t know yet.

“Professional athletes all have the same mind-set to get to the top. We are tenacious. I don’t have the amateur boxing pedigree, I don’t have a beautiful slick style. But I have a great chin and I have heavyweight power as a light-heavyweight.

“In this camp I sparred a really good professional who hit me with four punches, my head felt like a pinball and I thought: ‘This can’t be good for me’. I’ve bust my nose. For 10 weeks, no booze and no partying.” 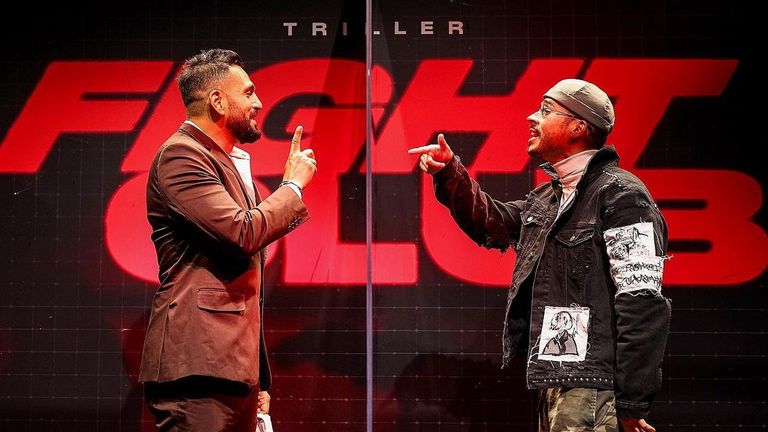 Fournier will fight on Saturday against Reykon, a Reggaeton musician, on the undercard to YouTuber Jake Paul’s battle with former UFC fighter Ben Askren.

Is this a future world champion in the making? Almost certainly not but nor does he claim to be. Aged 38, the nightclub owner who is regularly splashed all over the tabloids alongside pop stars and celebrities is changing.

His first job was aged 13 in a curry house and he is bashful about reports that he is a billionaire – when asked he says: “I came from nothing. Society puts you down – people don’t want to see you do well. The numbers don’t mean anything to me. What’s important is that I can go to Miami when I want, and I can pay for my mum’s healthcare.”

Forbes estimated his net worth at over £100m in 2017 but he points out that the hospitality industry has hardly flourished in the past 18 months and everyone feels the pinch.

His goal? He has already scuffled with Jake Paul this week and has publicly bet £2m he would win if they meet in the ring. Oscar De La Hoya, who at 48 wants to resume his legendary career, is a target too. Even Fournier laughs at that idea but stranger things have happened.

His true reason to fight again, however, is because the boxing ring is somewhere he is judged solely as the man he is. Forget the money and the nightclubs, they can’t help him. He wants to feel unprotected by wealth.

“I enjoy the razzmatazz but it’s a lot deeper than that, for me,” the undefeated light-heavyweight says.

“Boxing gives me something else to focus on.

“I always felt like I had unfinished business and I want to see how far I can take it.”

Tags: Bill, Fournier, is, Joe, THE
You may also like
Latest Posts