In his late 20s Jayde Mitchell was 178 centimetres tall, working flat out running a concreting business, and weighed in at 130 kilograms.

Six years later the Melbourne-based boxer is a svelte 76 kilograms and looking to build on a career record that stands at 20 wins, one loss, with 10 knock-outs.

If he can beat Hungarian fighter Istvan Szili in Melbourne on Saturday night in a bout for the vacant WBO Oriental super middleweight title at St Kilda Town Hall, he could catapult himself into the world top 10, giving him the chance for serious money.

It has been a remarkable turnaround for a man who had fought as an amateur when young but gave up for years after disillusionment set in with ''boxing politics''.

At the age of 28 he decided to try again in the pro ranks, with his father, Len, as his trainer. 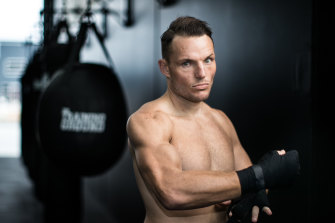 Mitchell  returned, having ballooned into a figure that resembled a ''balloon with eyes and a mouth''. He knew he was taking a huge gamble, especially as he was making good money from the  concreting business.

He sold his house in Rye, shut down the company and got rid of many of  his possessions – with the backing of wife Tegan – to fund his second career as a fighter.

After a long, hard road it's now on the cusp of paying dividends, although he is still not on an even keel given the costs associated with training camps, preparation and travel as he tried to launch himself into the world of professional boxing at a late age.

But ask him if it's been worth it and the answer is  a resounding ''yes''.

''I watched the Rocky Balboa films and the Mike Tyson fights as a kid. All I wanted to be was a world champion. Hopefully I can get close now,'' says the Rye-based 34-year-old.

He recalls just how difficult it was coming back.

''Tegan knew I had it in the back of my mind. She said concreting would always be there, but if you are to really have a go at this you will have to do it while you are still young enough.

''I remember that first morning when I made the comeback. I was up at 3.30am to go out for a run to start building fitness. It was terrible. I still felt dusty from the few beers we had had the night before after finishing the concreting work, and after 200 yards I thought I couldn't go on.

''But my dad [trainer Len] had told me that I had to prove that I was serious, prove to him that I really wanted to succeed otherwise it wasn't worth his time preparing me.

''So I stuck at it. I was 130 kilos at my heaviest and it took me eight months to get most of the weight off. 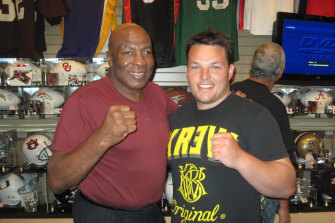 ''I cut out all the carbs and just ate lean meat and vegetables. Basically, if you couldn't grow it or kill it, it was out – no processed foods at all.''

Mitchell said he knew he could make a go of things early in his second stab at the sport when he went to Los Angeles to spar and train at famous trainer Freddie Roach's Wild Card gym, where Roach has trained top-level boxers such as Miguel Cotto, Amir Khan, Julio Cesar Chavez jnr and eight-division world champion Manny Pacquiao.

''I did well when I got there and it gave me a lot of self-belief. I knew that I could take it seriously, be a contender for a title,'' he says.

That belief was reinforced after his toughest moment came in 2017 when he sustained a serious vertebrae injury in the first round of a contest against Chinese boxer Ainiwaer Yilixiati, effectively fighting 10 rounds with a broken neck and still winning.

The only blemish on his record came in 2017 in his sixth fight, when he lost a majority decision to the now-retired Melbourne boxer Ryan Breese.

''That was a big shock for me at the time, but maybe it was what I needed then to make me realise I had to really focus,'' Mitchell says with the benefit of hindsight.

Tags: half, he, Man, Mitchell, THE, used
You may also like
Latest Posts