‘I’ll fight him right now if I could find his b**** a**’: Nate Diaz rages after  Khamzat Chimaev fails to make weight for UFC 279 by SEVEN POUNDS as Dana White shuffles the pack and gets Tony Ferguson to step in

Nate Diaz has vowed he will never fight ‘little leaguer’ Khamzat Chimaev in the octagon after the welterweight missed his weight limit by seven pounds ahead of UFC 279.

Chimaev’s failure to make weight forced UFC supremo Dana White to shuffle his cards and Diaz will now fight Tony Ferguson at the top of the bill.

For Diaz, the latest twist is a fresh turn in a rocky week after Thursday’s pre-planned press conference was scrapped after a backstage brawl between the main card fighters. 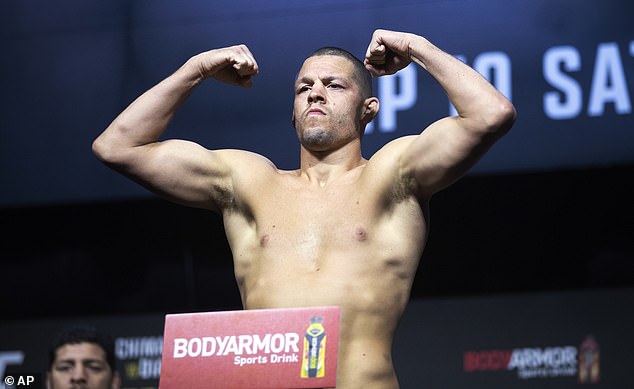 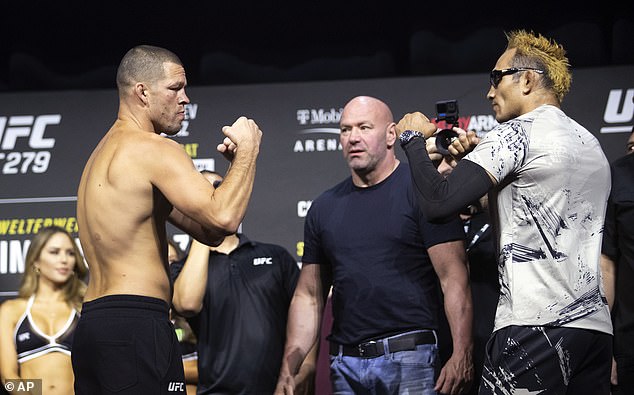 Diaz (left) and Ferguson (right) pictured facing off on Friday, the day before their fight

Speaking to the UFC channel late Friday, Diaz said: ‘I’ll never fight him here (Khamzat Chimaev in the Octagon), but I’ll fight him right now if I could f***ing find his b**** a**.

Diaz recently told ESPN he didn’t want to fight Chimaev and that he hadn’t even asked for the fight to be organized.

‘I’m the champion of the whole UFC,’ Diaz said. ‘And what they got me doing right now is they’re acting like I called for this fight, which I didn’t call for and don’t want and didn’t want and still don’t want. But I don’t give a f***, I’ll fight anybody.’

The resulting fight with Ferguson is the last on Diaz’s contract before he leaves the UFC and White says the showdown is one fans have always wanted. 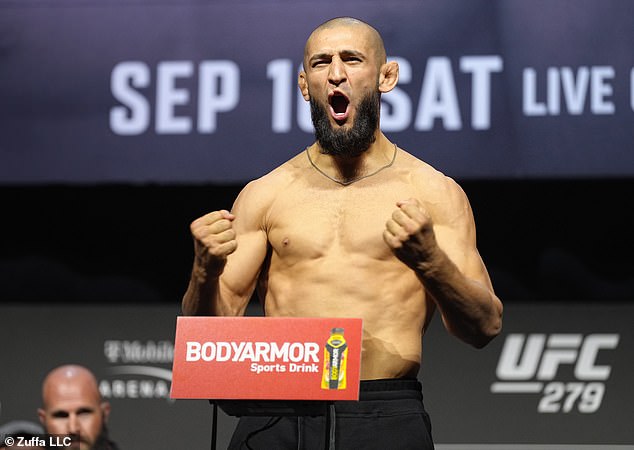 ‘Nate Diaz and Tony, the fans have wanted to see this one forever,’ White said. ‘It’s going to happen now before Nate leaves the UFC. It couldn’t have played out any better.

‘It’s not by coincidence that we stack guys in the same weight on the same card in case something goes wrong. It worked out.

‘Getting these guys to agree to different fights can be a little tough sometimes. We got it all done. We’re locked in.’