Apart from sharing a surname and a fondness for punching on with the Horn family, there are not many similarities between Nikita and Tim Tszyu.

The pugilistic differences between the siblings will be evident when Nikita takes on Ben Horn in the “Battle of the Brothers” at the Hordern Pavilion on Wednesday night, a bout that takes place two years after Tim effectively ended the career of Australia’s former world champion Jeff Horn.

The Tszyus have knocked out most of their opponents, but Tim normally takes a more conservative approach. The professional career of southpaw Nikita – that’s another key difference – has lasted only a few minutes, such has been his speed in disposing of opponents.

“I like to get it done as soon as possible,” Nikita said before his third professional fight.

However, it is outside the ring where it becomes clear the Tszyu brothers are polar opposites, personality wise.

“It’s weird, boxing is one of the only things that connects us,” Nikita said. “Everywhere else, he’s completely different. He likes cars, I couldn’t care less about cars. 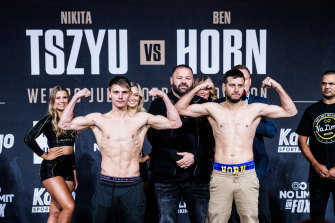 Australian boxers Tim Tszyu and Ben Horn weigh in ahead of their fight at the Entertainment Quarter in Sydney.Credit:SMH

“It’s very convenient in that aspect. I’m very reckless with my driving, I failed my Ps test six times, so you can imagine how shit I am.”

Then there’s the way they dress. Tim enjoys wearing the latest street wear, particularly when it comes to sneakers. Nikita hardly ever wears shoes and prefers unbranded clothing.

“These are like a cheap pair of $20 thongs [from] my birthday, the most used thing I’ve ever had,” Nikita said. “I take the scraps, whatever I can find. Essentially, the clothes I train in are the ones I walk around in, there’s no difference.

“I try to keep my branding to a minimum. I fell in love with the minimalist movement when I was studying architecture. I like not being a board of advertisements when I’m walking around.”

When it comes to trips away, Nikita prefers roughing it while Tim enjoys the finer things.

“He’s more a glamper, looking for the five-star resorts,” Nikita said. “I enjoy digging holes and shitting in them [on camping trips]. Being away from anything man made is peaceful for me, it’s a way of meditating the mind. I feel comfortable.”

Tim, who has a love of sports cars and recently sold a vintage ’69 Mustang, said his brother could not have a more different personality.

“We’re so different to each other,” Tim said. “We’ve always loved sports, that’s the only similarity we have with each other. And the competitiveness.

“Six times he failed his Ls, he crashed Mum’s car three times. He’s a hopeless driver. He doesn’t wear shoes at all. He wears thongs everywhere. It’s so weird.”

The Herald and The Age recorded footage of Nikita’s last fight from ringside, a first-round demolition of the previously unbeaten Mason Smith. Shown the clip, Tim said: “Did you hear the thumps? Nikita has some deadly thumps on his hands.

“He’s got this psychotic behaviour in his head.”

After viewing the footage, Nikita added: “That’s the perfect angle.

“I wish the referee gave me another few seconds. His hands were down, he’s leaning on the ropes, it was the perfect opportunity to give another left, pow. It’s the best feeling when you can feel their energy being sucked out of them.”