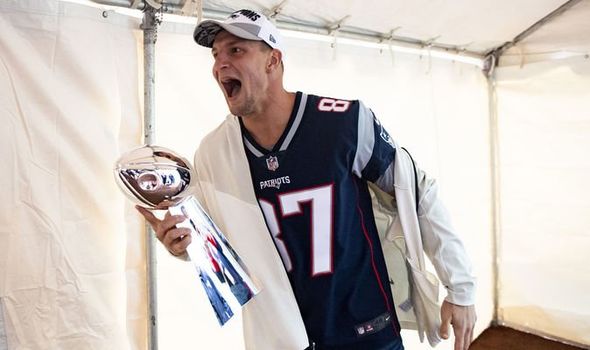 Rob Gronkowski is set to undergo a part-time schedule in WWE similar to WWE Champion Brock Lesnar’s after joining the wrestling giants. Gronkowski has agreed to sign with Vince McMahon’s promotion three years after his surprise appearance at WrestleMania 33 where he helped his friend Mojo Rawley win the Andre The Giant Battle Royal.

Gronk enjoyed a stunning nine-year career in the NFL with the New England Patriots as he won three Super Bowls under legendary coach Bill Belichick with some of the sport’s greatest players by his side, such as Tom Brady.

And now he is set to cross over to professional wrestling with his first appearance set to take place on Friday during SmackDown, provided that the show still goes ahead amid the coronavirus outbreak.

According to the publisher and editor of the Wrestling Observer Newsletter Dave Meltzer, the 30-year-old is set to undergo the same kind of part-time schedule like Lesnar.

JUST IN: How WWE superstars really feel about performing at WrestleMania amid coronavirus outbreak 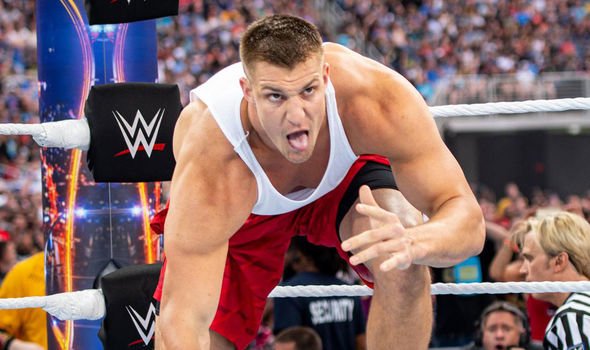 The UFC legend never wrestles on free TV shows like RAW or SmackDown and usually performs in major pay-per-view events like SummerSlam, Royal Rumble, Survivor Series and of course WrestleMania.

“He’s got size, he’s got personality. You know it’s kinda interesting because I don’t know how many concussions he’s had, but it’s a lot, a huge number and back problems.”

Gronkowski will be part of SmackDown on Fox as he already works for the network as an NFL analyst but there are currently very few indications as to how WWE are planning to book him.

The legendary tight-end might be put in a tag team with Rawley, who was the one that confirmed the news of his imminent arrival during Friday’s episode of SmackDown.

The Patriots great will also definitely be part of some major plans at WrestleMania 36, if it still goes on as scheduled on April 5 at the Raymond James Stadium in Tampa, Florida

WWE have been urged to follow the example of other sport franchises and postpone WrestleMania as cases of COVID-19, as the deadly virus is known, continue to mount.

There have been over 2,808 cases of coronavirus as well as 59 deaths in the US whereas more than 5,762 people have died around the world with global cases rising to 156,800.

Tampa officials are set to meet on Thursday and could pull the plug on Mania unless WWE Chairman and CEO McMahon takes action himself.