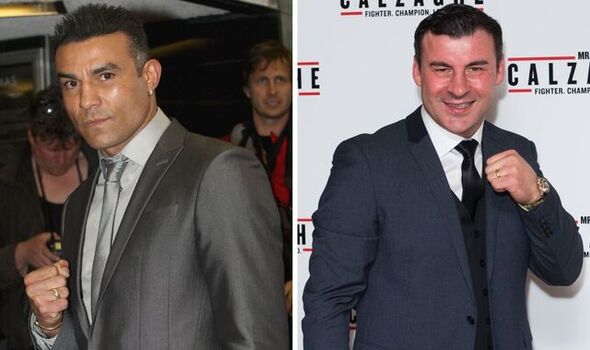 Robin Reid has told Express Sport that he wants to face former rival Joe Calzaghe in an exhibition bout but believes the Welshman won’t take it due to ‘demons’ from their first fight. The pair faced each other as professionals in 1999 for Calzaghe’s WBO super-middleweight title.

The fight ended in a split decision with divided opinions on the official result. England’s judge Paul Thomas gave it to Reid with a scorecard of 116-111 on the night, but Americans Robert Byrd and John Duggan scored it 116-111 the other way.

Now, with so many ex-professionals stepping back into the ring Reid wants to run it back with the man he believes he beat on that fateful night in February 1999.

He said: “I tried to get hold of him a couple of weeks ago. Yeah. Yeah. And I got Glenn [McCrory], I asked Glenn. Glenn knows him, so I said, ‘now listen, try to get hold of him, you know, pass my number onto him’ just so we can have a chat. Let’s just have a little sit down first to talk about what I have got in mind. It’s an exhibition, we’re not going to be killing each other, I don’t want to be killing myself at 51, but like a spar, bit of an open spar, that’s what I’m talking about.

Joshua branded ‘quite rebellious’ by Hearn ahead of Usyk rematch

“But I’ve heard he won’t have it because he’s got demons about the fight. He’s got demons about the fight? But I’m like ‘he won?’ I get it. I get it. Thing is it was a split decision, a close decision. So, at the end of the day, we should have had a rematch, but it never happened. But I think the demons are about – or he’s more p***ed off than I am because people still talk about it 20 odd years on.

“I was honoured to grace the ring with such a fighter and to take him that close to beating him. I’ve got the utmost respect for him. At the time, yeah there was a bit of beef don’t get me wrong, but now I’m 51 and I look back on my career now and think ‘you know what, he was good, he was good, he was brilliant’, Roy Jones, Bernard Hopkins, some great wins.”

Robin Reid last fought in 2012 in a losing effort against Kenny Anderson for the British Super-Middleweight title. During his dazzling career in the paid ranks, the former Olympic bronze medallist picked up the WBC super-middleweight title and fought the likes of Carl Froch, Jeff Lacy, and of course Calzaghe.

Reid has previously flirted with the idea of returning to competition in an exhibition setting but is certain the rematch with Calzaghe will captivate fans more than any other option.