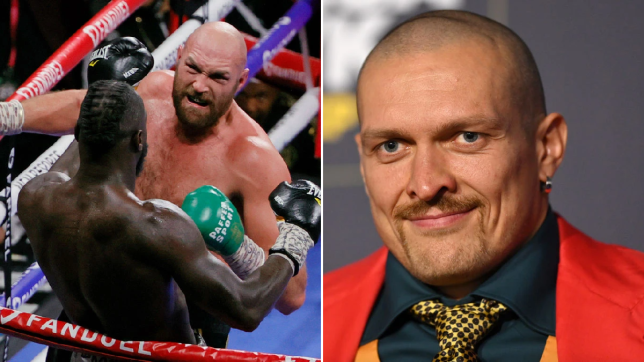 Eddie Hearn has revealed Oleksandr Usyk’s team have approached him with an offer for Anthony Joshua to step away from his rematch to set up a unification showdown with Tyson Fury.

Joshua lost his IBF, WBO and WBA heavyweight titles after being outclassed by the undefeated Ukrainian at the Tottenham Hotspur Stadium in September.

The Briton immediately activated a rematch clause with that bout expected to take place next spring.

WBC champion Fury however also has also set his sights on Usyk. Joshua’s rematch clause was thought to have scuppered any hopes of an immediate unification bout between Fury and Usyk but the latter’s team are now trying to convince Joshua to step aside and allow that fight to happen first.

Hearn has stressed however he is yet to sit down with Joshua to discuss any offer.

The Matchroom chief told Boxing King Media: ‘We’ve had their team reach out to us.

‘At the moment, there’s communication between the two teams to say, ‘Is it something that [you’d consider].

‘And the answer is; AJ has not been spoken [to] about this yet.

‘I’ll deal with it and when I feel there’s an opportunity for Anthony and 258, we’ll sit down with them and present that to them.’

Hearn continued: ‘But I don’t want to do that until I feel it’s the right opportunity because he’s not gonna be happy because he just wants to fight Oleksandr Usyk.

‘But if there’s a route, there’s an offer and it makes sense, we’ll see. But right now, just conversations.’

Joshua recently suggested he could be convinced to step aside if the right offer comes in.

‘In terms of stepping aside, I don’t know if that goes in line with what a morally stand for… but I want to be known as one of the smartest businessmen as well.

‘I want to make the smart decisions and if the money is right we would have to look at it but respect has more value than money.

‘Will I take the step-aside money? If its a smart business move… will it affect my reputation and respect?

‘Will I still get to fight the best fighters? Those are the three things I have to consider.’