Tim Tszyu, at the official weigh-in at Taronga Zoo, had the task of staring down his opponent without looking past him.

It was a job more difficult than it sounds. Earlier this week it emerged that, should he defeat Bowyn Morgan at Bankwest Stadium on Wednesday night, Tszyu’s next fight could be for the super-welterweight world title. 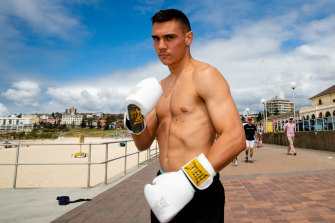 Tim Tszyu could be just one victory away from a world title shot.Credit:Nine

The first time Gallen and Tszyu were on the same card, the footballer was the main event. Tszyu was required to trade on his father’s name and Gallen’s fame to help build a following. Now Tszyu is the headline act and the former Sharks skipper couldn't be happier.

“I said from the start that this is what it’s all about,” Gallen said. “There’s a lot of guys who bag the footy players for coming in [for] stealing the limelight, so to speak.

“But Timmy embraced it, jumped on the back of it. He’s on the verge, if he wins this fight, of getting a world title shot.”

Tszyu's father Kostya claimed the IBF world super-lightweight title against Hugo Pineda at the old Paramatta Stadium almost 25 years ago. Now Tszyu jnr will fight at the same venue. If victorious against Morgan, it could host a world title fight next year.

“That would be amazing,” said Tszyu’s promoter George Rose, of No Limit Boxing.

“It’s unbelievable and well deserved for the amount of hard work that has gone into getting to where he is. He is a world-class fighter, that’s the only way he deserves to be going.

“Bowyn Morgan is a really tough fighter that Tim has to beat, but that’s added motivation for him knowing it’s just around the corner.

“For us, we deserve to host it in Australia. Boxing deserves crowds, to have people to be there to see it live.

“We’re blessed in Australia to have some great venues that are unaffected like a lot of other countries with COVID restrictions. Australia is the obvious choice to host a major event like that.”

Tags: dream, Taronga, THE, title, Tszyu
You may also like
Latest Posts